For Norwegian rockers, Aunt Mary, the release of their fifth album, New Dawn, is monumental for two reasons.  One, it is their first original studio project since 1973’s Janus, the release of which precluded an extended hiatus.  Two, it was an album forged through loss and sheer determination.  With the deaths of Jan Groth and Ketil Stensvik, Aunt Mary’s original singer and drummer, coupled with the resignation of bassist Svein Gundersen (all precluding/during the studio sessions for New Dawn), guitarist Björn Kristiansen found himself as the only remaining original member of the band, and faced the crucial decision of whether or not the project was worth pursuing.  In the end, the album’s release on 12 February reveals the final decision.  Produced by Kjartan Hesthagen and Henning Ramseth (who also performs the album’s keyboards), New Dawn serves as the teeth-cutting for the new lineup, including Bernt Bodal (bass), Glenn Lyse (vocals), and Ole Tom Torjussen (drums).  “New Dawn” is, therefore, an apropos title, both commemorating the end of an era and introducing a new one.

Unfortunately, this is not a phenomenal epitaph, nor does it particularly rivet me for Aunt Mary’s future.  I don’t think of myself as a skeptic, but I am definitely leery of press releases such as this that herald relatively peripheral bands as “pioneers of progressive rock” and “cornerstone act[s] in the worldwide history of rock,” and audaciously list them alongside acts like Jethro Tull and King Crimson.  Aunt Mary is a familiar name, sure, though not exactly the same caliber of prog staple as Tull and Crimson, and their trio of albums released in the 70‘s at best flirted with the progressive genre (arguably, each successive release invoked more prog, though opinions on this seem to vary).  All told, I began listening to New Dawn with few expectations, which is probably the only thing that saved me from really disliking it.  I feel cruel to be so critical of a comeback release – especially one that was forged in the midst of heartache – but this record is simply sub-par.  It’s thematically shallow and musically uninspiring.  It’s not bad at all, but it’s certainly not good either, and it’s anything but progressive.

Tracks like “Slave Parade” and “Blind Date” certainly have spunk: driving bass, hazy guitar solos, syncopation, and some shifting meters.  Kristiansen’s guitar work is tight and lick-based, and Bodal’s bass provides a strong complement.  I fundamentally disagree with the philosophy behind “Unconditional Love’s” lyrics, but this too is a grooving song with a killer bassline.  For its part, “Happily Ever After” works through an interesting chord progression while professing a weary, “nothing lasts” mentality. 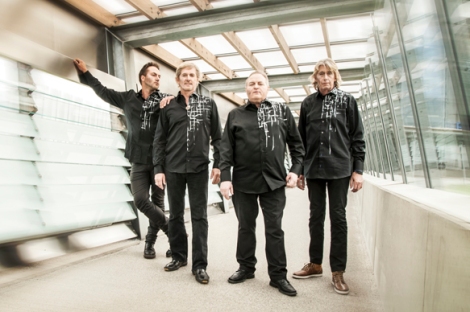 However, it’s songs like “G Flat Road,” “I Was Born to Ride On the Wrong Side,” and “Hopelessly Lost” that truly make it difficult for me to take this album seriously.  These tunes collectively read like a teenager’s rant against overbearing parents and oppressive society – a message that might have been more appropriate for previous decades, not the pluralistic, relativistic, post-modern world into which this album was released.  In his lyrics, Lyse adopts the guise of a self-appointed outsider, which ends up just feeling misinformed.  Furthermore, harshly carnal lines like “I don’t care about love / Your kiss isn’t enough” directly contradict the undergirding message of “Unconditional Love,” and if this fictive persona truly “likes living in sin” and truly has a screw-you mentality toward the world, then why adopt the guise of a victim crying out for attention?  I would expect more mature themes from seasoned artists, not this Bon Jovi nonsense.

That said, I do really like the old-school blues feel of “Been There, Done That,” and “Open Your Eyes” is also a good song – an acoustic guitar-based ballad that advocates the need for thinking outside of one’s self and making a difference in the time allotted (a notion also contradictory to the songs listed above!).  This lattermost composition’s lyrics make reference to needing to “cut out this cancer inside,” a particularly poignant metaphor considering the recent deaths of Groth and Stensvik (both the victims of cancer).  “Soldadera” contains some dark compositional progressions and a unique ambience, standing in contrast to the album’s final track, “Don’t Keep Me Waiting,” which is a fun, rollicking, guitar-driven tune.  Lyse’s vocal work on this one actually makes me think of Ed Roland from Collective Soul, and I enjoy the unrestrained guitars working against the counter-time.

On the positive side, New Dawn boasts some really decent guitar work, decent overall musicianship, and decent compositional variety.  But maybe that’s New Dawn’s biggest flaw: it’s just… decent.  It’s unfortunately not the impressive comeback that the band hoped it would be.  It’s also not the through-and-through progressive rock/metal it claims to be: it’s got some bite, it’s got some metal moments, and it’s got some eclectic elements that make the album difficult to categorize.  To some degree, this is probably the result of the band’s growing pains, as opposed to a truly diverse set of influences, not to mention the fact that this album is an attempt to resurrect an old mantra in a new decade.  New Dawn ultimately feels like it really needs to turn in for another night or two, and this time – at the Newer Dawn – wake up on the right side of the bed.