In his quest to become the second coming of Peter Hammill in as many ways as he can possibly be, Matthew Parmenter has returned to his solo career after a moderately successful return to Discipline. 2011’s To Shatter All Accord was my introduction to both Discipline and Parmenter, and although it originally didn’t blow me away back when it first came out, on returning to it last year I found myself enjoying it a lot more, to the point where I would call it one of my favourite retro-prog albums of this current decade, wonderfully linking classic structures and influences with songwriting that avoids the seemingly consistent blandness that so many modern throwback bands find themselves drenched in. Obviously, the notable difference between when I first heard Discipline in 2011 and my liking of them in 2015 was a recently acquired fandom for Peter Hammill and Van der Graaf Generator. It’s difficult to address a record like To Shatter All Accord, or in fact anything with Parmenter’s voice, without comparing it instantly to a Hammill-penned equivalent. The aggressive theatricality in the voice, off-colour arrangements of instruments and song-structures, as well as a general link to each other through piano and progressive rock, Parmenter will always, in my ears, be unfortunately stuck behind the shadow of a legend.

All Our Yesterdays is to To Shatter All Accord is what Over is to Godbluff and Still Life. After a small time returning to the Van der Graaf Generator to play some rockier and more ambitious material, Hammill came back to his solo project with aim of making more songs and less epics, with the focused songwriting and lyricism of a folk singer, but keeping his own eccentricity and flair in the songs. All Our Yesterdays is almost exactly that for Parmenter – the songs here are brief and reasonably to the point, and have none of the overblown instrumental antics that plagued To Shatter All Accord (for the worse, in my humble opinion). It is missing a bit of the edge that came with Discipline’s band-oriented approach, and there are some problems that I have with Parmenter as a composer that are still here, but this is a nice singer/songwriter approach to their style that manages to be song-based without losing his unique sound. 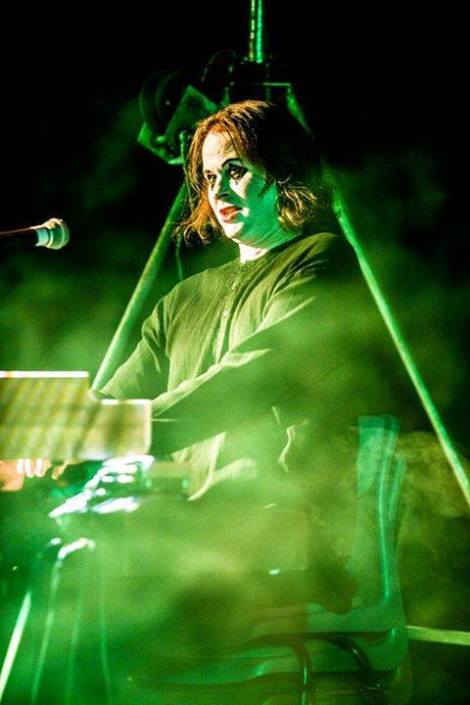 Most of the songs are piano and vocal-based, with organs and synthesisers and guitars floating in and out as atmospheric enhancers more than lead instruments. The bass guitar is also very prominent, often far more so than any lead guitar, and the drums are suitably minimalistic. Parmenter puts focus on his vocal melodies and piano parts mostly, with many having smooth and memorable melodies akin to those of a folk group, but dressed in progressive melodrama. None of the songs here are groundbreaking or amazing, but there are no weak tracks either. There are pure ballads and moody organ-covered tracks and upbeat numbers with drum features. A lot of the time solo singer/songwriter albums feel lazy in composition and arrangement, but Parmenter has managed to make the medium his own, and has fused occasional glimpses of his progressive rock past into the songs by means of organs and violins and synthesisers, which create a serene and pleasant atmosphere throughout the album, that is probably it’s biggest drawing point behind the vocals.

In the end my biggest problem with All Our Yesterdays is the same as my problem with Discipline – the often obstructive over-influence from Van Der Graaf and Peter Hammill. The songwriting has its own flavour at times, with Parmenter playing some material on the piano that is softer than anything Hammill would ever do, and “Stuff in the Bag” probably having more in common with Peter Gabriel than Hammill – but his vocal timbre and delivery is almost identical, complete with the things I don’t like about Hammill himself, namely his tendency to be incredibly melodramatic. The vast majority of this album sounds directly out of 1976, in pretty much every way, including production. This is not a problem for most of the time, as classic production can often sound warmer and fuller, especially with music as organic as this, but at times Parmenter drops some more modern sounds (probably just to remind us that this is in fact an album coming out in 2016), and they don’t quite work in the way he wants them to. “I Am A Shadow” is one of the best songs on the album, compositionally, and the inclusion of some incredibly 80’s Blade Runner synths is a nice extra touch, but for me the electronic percussion takes it one step too far and pulls you out of the moment a little bit.

This is not the sort of album one expects to come and knock them off their feet, but it is one that makes for pleasant listening and mild intrigue. Parmenter has written some nice, simple songs and recorded them with 1976 in mind and there isn’t really a bad moment on this album, but I would still hesitate to fully recommend it to everyone. Fans of Discipline, or indeed Van der Graaf Generator, should check this out, as well as anyone with an affinity for personal singer/songwriter music that isn’t just acoustic folk. No true standout tracks here, but the album has a smooth and detailed atmosphere with a range of instruments and a strong vocal performance, if you can ignore the blatant Peter Hammill impression.