I love seeing the other side of artists that I follow.  Some artists seem to be proficient in not only multiple instruments, but multiple styles of music, as well.  Transcend is one such project, and their new album “Balance i” released on April 13th.  The results are truly immaculate.

Transcend hails from Canada, and have been around for over a decade now.  This, however, is only their second official album.  The band line up on this album is Costa Damoulianos on vocals and guitar, Devon Butters on guitar and bass, and Alexi Lagogianis on keys.  Sean Lang handles drums for the band.

You may recognize Costa from his other project, Zoungla.  I’ve reviewed two of his albums and I post about that project quite often on Facebook. While Zoungla is the newer of Costa’s two musical outlets, I’m still more familiar with it.  Zoungla is more along the lines of psychedelia, electronic, and ambient music, while Transcend is very clearly progressive metal.  However, there are times when the two projects blur into one another, and those are my favorite moments.

Transcend offers a pure-blooded progressive metal, one that sounds modern, fresh, and very clean.  You will hear monster riffs that feel vivid and satisfying, but you will also hear extremely melody guitar licks, luscious keys, and a commanding rhythm section.  Oftentimes, the guitars sounds just as melodic as the keyboards, which is certainly a difficult thing to achieve.  The band also includes plenty of electronic and world influences, injecting atmosphere and accents into every moment of this album. 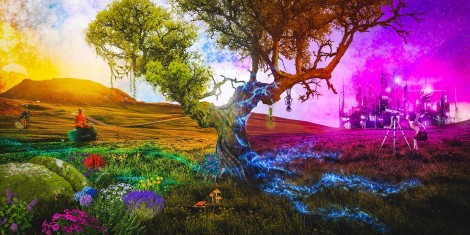 “Balance i”, as with the band’s first album “The Mind”, has some philosophical bent to its lyrics.  The cover gives that away, I think, as the lyrics discuss core questions in humanity’s existential relationship with our surroundings and with our reality.  The music plays off this quite well, feeling full of gravitas, wonder, and sincere curiosity.    This is a heady album, through and through.

The album only has four tracks, and it clocks in at around 35 minutes in length.  I don’t feel like it is too short, as it seems whole to me.  All four tracks are wonderful, too.  The album opens with “Disillusion”, a grand eleven minute epic that features huge riffs, attractive electronic loops, and a catchy (if a little repetitive) chorus.  As humongous as that song sounds, the next track might be even better.  “Where Are You Now” is quieter, but somehow more complex and layered.  It feels slightly odd, but juicy and alive.  There is this glowing quality to it that is just so addictive, and Costa sings his heart out, too.

The last two tracks are also winners.  “Machine” is a drum-less ballad of sorts, feeling cinematic and emotional.  It will tug at your philosophical heartstrings, to be sure.  The last track on the album, however, is my favorite.  “A Parallel Reflection i” is another epic at over 12 minutes in length, and it features distinctive Eastern influences.  The ethnic melodies are the heart of this song, and the band plays off them to rumbling and extraordinary effect.  The song grows and adds layer after layer, swelling with power and color.  The second half blends in some of Zoungla’s dub sound to feel squishy and ethereal, like floating within metaphysical ether or something.  It’s a vibrant and gorgeous way to end the album.

“Transcend” seems to be on a mission to combine philosophical musings with music that feels the same.  “Balance i” does it very well, giving us layers of beautiful melody set up against breathtaking riffs.  The sheer vivacity and eccentricity of this album give me goosebumps, and I think this album will do the same for you.