Bands evolve and change, and many find themselves along the way.  The new album from Elder is upon us, and it is proving to be complex and invigorating.  “Omens” released on April 24th through Armageddon Shop.

Elder comes to us from Berlin, Germany.  They started life back in 2005 as a stoner/psych band, but have become something meatier and more powerful of late.  The line up on this album is: Nicholas DiSalvo  on guitars, vocals, and keyboards; Jack Donvan on bass; Michael Risberg on guitars and keyboards; and Georg Edert on drums.  Fabio Cuomo also guests on keyboards.

Elder offers winding, layered, retro 70s-tinged progressive rock.  The 70s thing isn’t overly strong, though, and comes through mainly in the keyboard tones they choose and the classic feeling of their guitars.  Their music is mostly instrumental, though some songs, such as the opening title track, have far more vocals than the other songs.  Overall, they have a roaring, tumultuous sound that feels unrelenting and driven.

Guitars are the highlight of this record, without a doubt.  While the band offers a few interesting keyboard lines to cut through the bulky style of their music, this album is primarily about hefty guitars, crashing cymbals, and pulsating bass.  There is no doubt that Nicholas and Michael’s guitar lines have major impact, and they tend to lean heavily on twisting, complicated licks rather than standard riffing.  They certainly don’t cross the “metal” threshold. 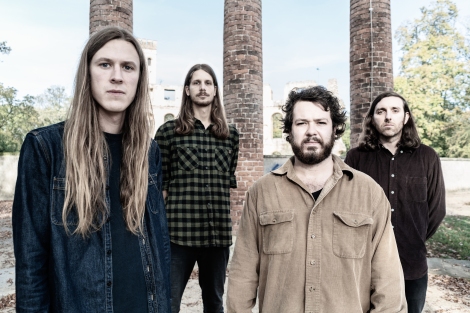 If I can be blunt for a second, the band seems self-aware.  The weakest part of the package that they offer is the vocals, pure and simple.  The band seems to know this, though.  While not offensive or unattractive in any way, Nicholas’ voice is more suitable for harmonizing with the music, and is even mixed into the music as if he were in the background.  I can appreciate this.  His voice is pleasant enough, but it is clear that the band knows their strengths.

The album only has five tracks, but four of them are each over ten minutes in length.  This lends to the sprawling, relentless feeling of the music, too.  I will say, though, that the songs sound much the same as each other, which isn’t necessarily a bad thing.  I found it interesting that “Embers” was released as the single, as it is easily the weakest track on the album.  It feels a little flatter than the rest, but I love the soloing in the second half.

I’m actually having some difficulty describing each track just because they do sound so much alike, both in the instrumental and vocal departments.  “Omens”, “In Procession”, and “One Light Retreating” can all be described as weighty, guitar-driven, and stabbing affairs studded with light vocals and some musing moments.  The track that stands out from the rest is “Halcyon”.  It is a bit quieter and more spacious.  It builds slowly and more psychedelically, offering whimsy and plenty of room to think.  I believe the rhythm section is strongest on this track, too, as they are given the reins for the first half, and unleash themselves even further in the second.  It’s the one track that feels more structured, too, with both an understated intro and a fading outro.

“Omens” is a mouthful, for sure, and it will take some time to chew it and truly taste its musical prowess.  The guitars are surely the best part, and they do roar and reel satisfyingly.  I think the band could work on diversifying their tracks, but this is overall a solid release that will certainly please their fans.