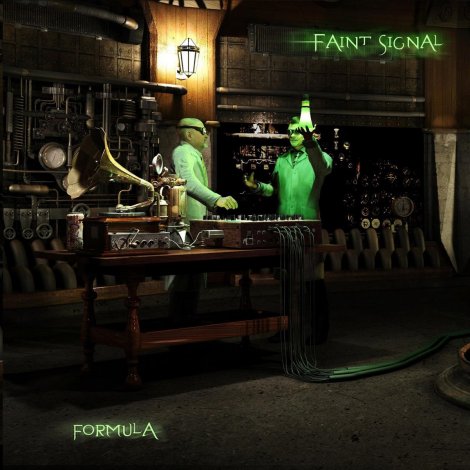 I found Faint Signal in a rather unorthodox way. Bandleader Henri Eisenbaum met me in some prog-rock group or other and sent me his band’s latest album, Formula. I find that my most positive reviews are for music I sought out independently, followed by music that bands and labels emailed to Jason, followed by music that is sent directly to me. (I’m slow to trust anyone who thinks I know what I’m doing.) Consequently, I went into this album not really knowing what to expect. People have sent me some bizarre albums in the past. Let me tell you, I was very pleasantly surprised by this album. It’s well-written, professionally-produced, and one-of-a-kind.

Faint Signal is essentially a two-man band with studio help, sort of like Steely Dan. Henri Eisenbaum sings and plays guitar and keys. His keyboard work, in particular, is absolutely fantastic. Henri is also the band’s primary songwriter, credited as the sole writer on all songs except “Mixed Signals” (which he shares with his musical partner). Randy Campbell plays bass guitar, stick, and percussion (on top of sharing vocal duties with Eisenbaum). I am not sure entirely what is meant by percussion, as the majority of the drums on the album are programmed. However, there are definitely some very fun percussion effects on songs such as “Surface Tension,” and we have Randy to thank there.

The band has an interesting origin story; in 2011, Campbell published a Craigslist post entitled “Is Prog Rock dead in Cincinnati?” Eisenbaum responded, and three years later, they released their self-titled debut album. Their sound has elements of Pink Floyd, RPWL, Jarod Fedele, David Bowie, and others. It’s very dramatic and has a lot of techno and sci-fi elements. Formula is a fresh, exciting album that I expect to enjoy for many years to come. I hope you like it as well.

The album begins with the keyboard riff of “5,000 Years,” which segues into an extremely catchy verse, sung by Katja Loeb. (My sources tell me that she had never recorded in a studio before. She did a heck of a job!) Halfway through the song, it changes to a piano-led piece with a male lead vocalist and a lot of cool contrapuntal melody. This builds into a saxophone solo, courtesy Denny Allen. It’s not a solo with a lot of notes and it doesn’t really use any mind-piercingly high notes, but it’s effective and moves the song well. The song ends abruptly and is followed by the ominous opening of “Led By The Moon,” played on the low end of a grand piano. It sounds like spy music! Soon, a beat enters the picture. It’s 3/4, but the rhythms are syncopated in a rather unorthodox fashion. There is a verse, but the majority of the track is a bass-driven jam session. Campbell acquits himself very well here, guiding the song through various movements. It reminds me a bit of King Crimson, although a good deal less likely to be played as you enter a mad scientist’s secret castle.

Next begins the “Groomed For Success” trilogy, beginning with part A: “Formula.” It’s an ominous electronic tune with a lot of awesome bass. The guitar solo at the end is awesome! “Groomed For Success (b. Panacea)” is a catchier, faster-paced tune that nevertheless has a hint of melancholy about it. To me, the style of the vocals and lyrics seems cynical, even a bit sarcastic, much in the same way Roger Waters and Pink Floyd often were. The guitar, too, reminds me a bit of David Gilmour. “Groomed For Success (c. Golden Timepiece” is a slow, sad song which begins with string synths before shifting to a piano-based verse. This one is very Floydian, too; it sounds a lot like the more contemplative tracks from The Wall. Mark and Whitney Barricklow Szabo provide harmonic backing vocals.

“Terra Incognito” is a very cool instrumental with a lot of various types of synthesizer. An ambient bit around halfway through features some cool improvisation. “Linear Skies” begins with a very cool, “marching” riff that reminds me a lot of this Genesis song. The melody, again sung by Loeb, is extremely catchy, but the instruments underneath are extremely proggy, almost King Crimson-esque in their ascending chord progressions. This is Eisenbaum’s magnum opus as a guitar player, evoking Robert Fripp and Tony Iommi. “Surface Tension” begins with some of Randy Campbell’s percussion stylings and some very cool keyboard variations that sound like they have been played on a Moog. It is the only track to feature a real drummer (Kevin Hartnell), and the difference is painfully clear. The next track, “Mixed Signals,” begins with a very weird riff in 10/8 with a lot of weird note intervals. However, it’s still incredibly melodic. An awesome, upbeat jam section halfway through leads into a piano interlude, which in turn returns the song to the basic melody. Rob Fetters guests on lead guitar and does an awesome job. “Mixed Signals” is, by far, my favorite track on Formula. 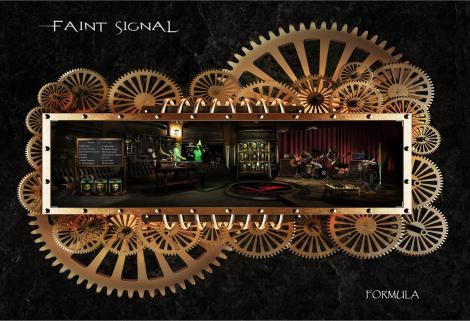 “Robed In Tradition” is a very Floyd-y track. It begins with some very nice acoustic musings and big, sweeping synthesizers before moving to a melody that you can hear in Roger Waters’ voice without concentrating too hard. The fretless bassline (I think it’s fretless?) that underpins the melody is absolutely gorgeous. It locks in perfectly, but stands out enough to hum. A psychedelic bit in the middle gives way to an emotional guitar solo. (A side note: Henri’s guitar tone reminds me much more of Brian May and Trevor Rabin than David Gilmour. He uses a lot of high notes and bends, true enough, but neither his notes nor his tone are particularly bluesy.) The last section of this very programatic piece is a march of sorts, led by a punchy bassline. “U.A.V.” has a cool beat and a retro-prog feel. It sounds rather like Emerson, Lake & Palmer, but with more and better guitar. A piano lick in the middle that ends as suddenly as it begins is the best part of this one.

“Live It Now” has a very cool riff with a lot of triplets and swung notes. The melody is very catchy as well. The outro is fun and chaotic. The final track on the album is “Zero To 55,” and it’s also one of the better songs. The intro begins with big, washy synths before a punchy bassline transforms it into a kind of power ballad. Indeed, let’s discuss Campell’s bass tone for a moment. The punch is incredible! This song’s heavy, industrial feel is largely due to his bass work. However, the best part of this song, in my opinion, is the subtle violin part by guest JulieAnn Martin Bernard. The album ends with a final piano etude.

Formula is a fabulous record, and I have but one complaint: the drums are programmed, and you can definitely tell. As “Surface Tension” proved, a real drummer with emotion and space to improvise goes a long way. Add a drummer, and this band goes from “good” to “great” in an instant. Nevertheless, this is a fantastic album. Henri Eisenbaum has proven his mettle as one of the best new progressive rock songwriters and multi-instrumentalists, and I think his masterpiece is yet to come. I definitely recommend Formula to any fan of spacey, psychedelic prog.

One response to “Faint Signal – “Formula””