When I prepare to write a review, I’m usually quite ready for it.  I know exactly what I want to say and how I feel about the album at hand.  With Novena’s debut full length effort “Eleventh Hour”, I’m still processing the music, and I think that will continue for some time.  The album released on March 6th through Frontiers Music.

Novena is something of a super group, I guess you could say.  The collective cites London as their place of origin, and includes: Ross Jennings on vocals (Haken), Gareth Mason on vocals (Slice the Cake), Dan Thornton on guitars (ex-HAARP), Harrison White on guitars and keys (theatrical director), Moat Lowe on bass (Slugdge), and Cameron Spence on drums (Ravenface).  Some names are more recognizable than others, I am aware, but these are all seasoned and brilliant musicians that have come together to form something unique.

When Novena released their debut EP in 2016, I confess that I was not willing to take the plunge.  Why?  For some reason, seeing Ross in a different project from Haken really threw me for a loop, so I pretty much forgot about it.  This time around, though, I was more than ready to hear Ross in another light, and I am glad I took the time to hear it.  If anything, Ross sounds more majestic and more enthusiastic than ever on this new album. 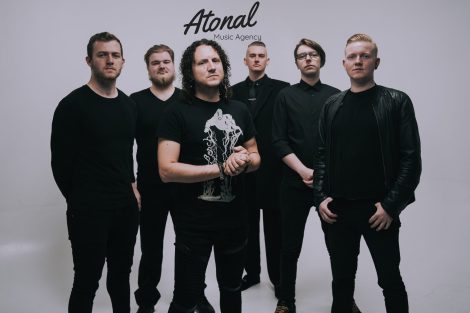 Novena could be called progressive metal, but there are so many nuances that should be cited.  The band has a progressive death metal vibe overall, but some songs have no harsh vocals at all, and some songs are hardly metal at all.  The band injects a clear Latin vibe into many of their melodies, and you will hear plenty of lush piano work, vocal rounds and harmonies, energetic tempos, and winding guitar lines.  On the other hand, the music can get dark, very dark, and even viciously emotional.  The band does a great job at combining intensely personal lyrics and voiceovers with a technical musical style.

One thing I have noted about “Eleventh Hour” is that the second half of the album is far stronger than the first half.  The intro “22:58” and the diverse “22:59” start the album well, and “Sun Dance” and “Disconnected” follow as solid singles.  If the rest of the album followed suit, it would be a good album, maybe one that would fade from memory soon, however.  The fact is, though, that the six tracks that follow are really, really strong, and the best track of all is the finale.

“Sail Away” and “Lucidity” begin this powerful part of the album.  These two songs bleed into one another, and they feature luscious piano melodies, some soaring, gravy vocals from Ross, and that epic Haken feeling I expected.  I immediately loved these tracks.  “Corazón” is a brilliant change of pace, though.  It is dense with Latin flavor, even featuring a salsa-inspired interlude complete with Spanish vocals from the wonderful Luisa Santiago and a light-hearted, hand-clapping dance vibe.  It is a brilliant track, and the moment Ross comes pouring in after the interlude is one of the best moments on the album.

“Indestructible”, an energetic and fun track comes next, featuring plenty of Gareth’s powerful growls and lots of rhythm.  “The Tyrant” follows, and is another instantly likable track.  It is a riff-heavy affair with an untainted vitality that will pull you into the imaginative song structure.  I love it, especially the hefty last half.

But, I must say, the band ends the album with the best track of all, “Prison Walls”.  This fifteen minute finale is groovy and heavy, and it meets all the expectations for a prog “epic”.  However, the middle half of the track is a voiceover, performed by Gareth, of a man becoming increasingly emotional and even feral over the course his life has taken.  His mind and heart clearly ache with a pain and anguish that needs to come out, and so he rants on and on about the damages that have been inflicted upon him and that he has imposed upon others.  It gets incredibly emotional, so much so that some listeners may be terrified, to say the least.  This tirade—this outburst—is one of the most passionate, expressive moments of music that I’ve heard since Evergrey’s “When the Walls Go Down”.  The rest of the track transitions from heavy darkness into a glorious, hopeful ending with Ross at the top of his vocal game.  “Prison Walls” is a truly powerful track, one that demands attention.

Novena’s debut album is a success.  I still see room for growth and maturity, but hearing the diversity, power, and feeling that this album offers puts me in a good mood, even the chilling personal eruption in the final track.  Novena obviously wanted to try something new—to offer an experience you won’t find anywhere else, and I think they have succeeded in that regard more than they may even know.