Thematics’s debut album, Skyrunner, is a heavy progressive rock concept album which draws its lyrical inspiration from a number of mythologies and religions, and its musical inspiration from a number of different genres and styles. It features traditional folk instruments in some spots, sounds like classic progressive rock in others, and most often finds itself in a mix of post-hardcore, progressive metal, and modern alternative rock.  It released on January 31st.

This album blew me away. None of the performances are staggering from a technical perspective, but they all fit together just right. The guitar and bass are raw and angry when they need to be; and, in turn, sweet and singing on the other side. The drumming is tight – crossing genres and moods perfectly with the rest of the band – and providing a blast beat or a complicated fill as punctuation at just the right time. The vocals are clear and emotional. Harmonies abound throughout, and while the vocal style is predominantly clean, harsh vocals are sprinkled throughout the album as they are needed. 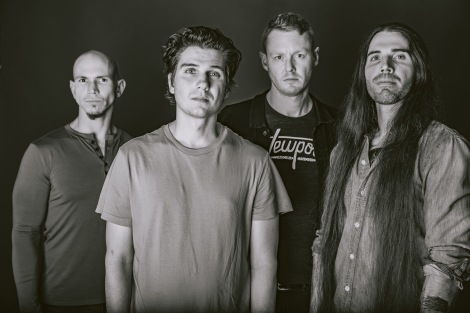 The concept deals with the idea of incarnation: a god come to earth to save a people unwilling and perhaps unable to save themselves. As such, the god feels the experiences of humanity and suffers as a mortal in his efforts to help mankind. The end result is a powerful and uplifting album filled with rich imagery. Often I find that when a band has something to say, the balance between instrumental and vocal gets weighted too heavily towards the vocals, and the listener lacks time to reflect on the story. Thematic avoids this on Skyrunner with well-placed breakdowns, instrumental breaks, and solos throughout.

The title track, “Skyrunner,”  as well as “Silence in Thought” and “This Golden Day”, the closer, stand out as great examples of the all-around excellence of the album. If you’re a fan of both modern and progressive rock, Skyrunner is the sort of album you need to hear. It deftly balances the technical aspects of progressive music with the emotional, song-oriented performance of alternative rock. One of my unexpected favorites of the year so far.