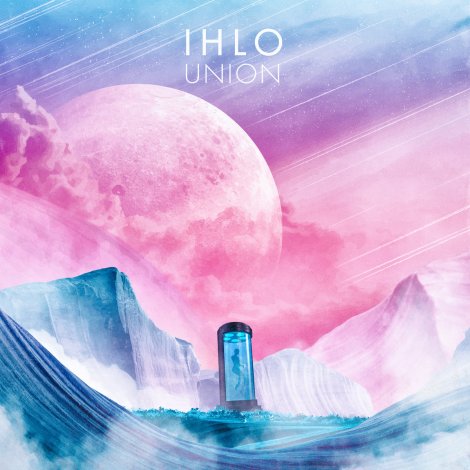 It’s always interesting to leap into an album that seemingly has been experiencing polarized reactions.  I’ve been following the release of Ihlo’s “Union”, which took place on May 31st, and the opinions have been flowing into two distinct patterns: copycats vs brilliance.  For me, this debut from Ihlo smacks of youthful brilliance and huge potential.

Ihlo hails from the UK, and the lineup includes: Phil Monro on guitars, Andy Robison on vocals, and Clark McMenemy on drums.  Yes, Ihlo belongs in the list of modern progressive metals acts alongside such bands as Tesseract, Haken, Leprous, and Distorted Harmony.  However, I do not find them overly derivative of those bands.

Many people have been specifically comparing the music to that of Tesseract.  What that means is that Ihlo plays modern progressive metal with djent on their brains.  They honestly sound more like a band out of Australia, especially in their chosen guitar tone.  However, I find that the djent is done in good taste, and the band focuses more on the overarching melodies that they pair with their stuttering riffs.  I think this band has much more to offer, and you can especially hear that in the second half of the album.  Their music overall comes across as smooth, rhythmic, and melodic; with fantastic instrumentals and electronic accents that really get your blood flowing.

However, I do want to address some issues that I think are the elephant in the room here.  The band uses quite a bit of programming in their sound, and so the music, as pleasant as it sounds, can come across as a bit lightweight or feathery.  The drums, for one, seem to be “produced”, and that is noticeable on a few tracks.  Overall, I’m impressed by the sound they pulled out of the means they had at their disposal, but getting more members might be the way to leap forward for this band.  Per the picture below, I think they are doing just that.

The major strength of this album is the songwriting, pure and simple.  While some might talk about their influences or about the programming, the fact remains that these guys write addictive songs.  That is the first reaction you will have after hearing the full album.  I think “Union” and “Reanimate” are great examples of the catchy choruses, smooth riffs, and tight structure that make up these songs.

In my opinion, the second half of the album bests the first half, and all my favorites are found there, save for the single, “Reanimate”.  “Hollow” is the start of the second half for me, and is one of my favorite tracks on the album.  It is more textural and electronic with lots of musical space.  It explodes a few times, but especially at the end.  “Triumph” follows and feels just like its name.  Its casual riffing is boosted by the beautiful melody that emerges and you can feel your heart rise along with it.

The last two songs are the pinnacle of the album, though.  “Parhelion” flows with cerebral power and wide open spaces.  This is one of the tracks on the album that tells me that Ihlo has great things in store for us.  This song is spacey, glorious, and impressive.  “Coalescence” is the 15 minute album closer.  I believe that it displays all of the strengths that the album has offered, all in one track.  So, you will hear loads of riffing, but beauteous ambient portions, as well.  The last half is probably my favorite part of the album as the tight riffing meets the otherworldly background melodies.  It feels climactic, enlightening, and hopeful.

Overall, Ihlo is much more than the sum of their influences, and probably better than an 8/10 would normally communicate.  There is a spark of genius here that you can hear weaving in and out of the rich melodies and the stuttering riffs; and the very end of the album unleashes that energy in grand fashion.  They certainly have more to offer than any genre label could tell.  I really hope that we can hear more of this energy from Ihlo soon.