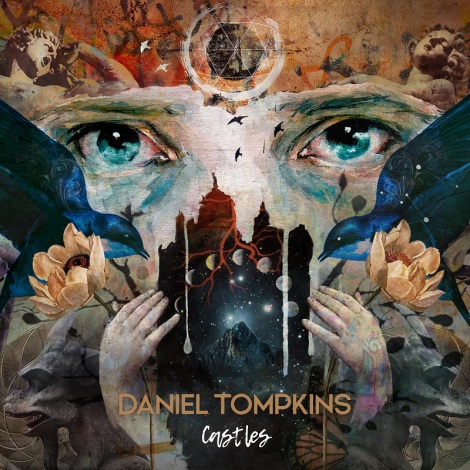 Sometimes, you just need an album that refreshes your musical palette.  Through all the overtly complex music that the progressive community has to offer, sometimes a thoughtful, well-produced album of songs is exactly what I need.  Daniel Tompkins is getting ready to release his debut solo record, called “Castles”, and it has been the refreshment that my brain needed.  The album releases through Kscope on May 31st.

Daniel is well known for his involvement in TesseracT and his former gig with Skyharbor.  Kscope believes in him as a solo artist, though, and I do, too, having heard this album.  Several guests appear on the record, mainly in some remixes; including Acle Kahney (TesseracT), Grammy-nominated Randy Slaugh (Periphery, Devin Townsend), Paul Ortiz (Zeta, Chimpspanner) and producer Dmitry Stepanov.

The music here is something I would call post-prog, meaning that it uses progressive trappings in unique ways, and is highly accessible.  You could also call it progressive pop, or something like that.  Basically, the melodies are rich, the choruses are strong, and an electronic overlay almost always inhabits each song.  I can sense a late 90s/early 00s alternative rock influence in Daniel’s writing style, and some of the songs come across like something I would have loved back then, only with more class and minimalism.  It is a strange mix of raw emotion and minimalistic approaches.  The music is also abstract in various ways, offering a subtle theatricality and poignant lyrical themes that often become the most interesting part of the record.  You can especially see this in the stylish and extremely well made music videos.

There’s just something about this record that keeps drawing me back for more.  The lyrics are passionate and expressive, and they concern love in all its forms, whether lost, found, or searching.  Sometimes, we erect castles in our own minds to block out others, or maybe we build them to keep our love strong.  Regardless, the songs here visit human emotion as its most vulnerable.

“Castles” technically only has seven tracks, as the remaining six tracks are remixes.  And that is another strange thing about this album: The singles that were released were both remix versions of the original songs, so when you hear the original versions, you may end up preferring the remix.  Like with Nine Inch Nails and other remix-happy bands, the remixes often sound completely different from the originals, so they are essentially entirely new songs.

Some examples are in order.  “Saved” starts off the record strongly with a fantastic chorus.  You will find, though, that the single version comes later on the record.  This original version has lots of electronic overlay, completely changing the effect.  I do prefer this version, but I also love the minimalism of the remix.  It’s a difficult choice, though.  “Limitless” is one of my favorite songs of the year, and my son and I cannot get enough of it.  I do, however, prefer the single/remix version with Dmitry Stepanov.  It has more emotion and some rather haunting accents that I love.  The original is fantastic, too, but the remix is the one I go for immediately.  I even changed the order of the digital track list so that the remix plays instead of the original.

The rest of the tracks are just as good.  “Black the Sun” is a very interesting tune that really reminds me of early 00s alt rock in its emotive chorus and in Daniel using the upper end of his vocal range.  “Kiss” is rather abstract and heavily laden with programming.  It sounds great, though.  “Cinders” is a beautifully emotive love song of longing and desperation.  I adore the chorus.  “Telegraph” is a gorgeous ending song with lots of feelings present.  It is slower in pace, and stunning violins sweep in near the middle to elevate it even further.  My second favorite on the record, though, is the overwhelming title track.  “Castles” is truly sublime, especially in the subtlety of Daniel’s voice, and the chorus comes spilling in with power and flow.  I’ve been singing this song non-stop.

Overall, Daniel has made the leap to solo records successfully.  His voice sounds amazing, the songs are accessible and richly composed, and the lyrics are incredibly human.  “Castles” is one of those albums that you will listen to over and over until the songs become definitive for your 2019 music year.