I find myself falling more and more in love with the whole progressive electronic genre.  There’s just something about how the musical themes morph and evolve while layer after layer of sound is added and developed.  Some of these albums are stark brilliance.  Teeth of the Sea is one of those bands, and they too keep evolving and impressing me further.  Their new album “Wraith” releases on the 22nd of February, and it is a treasure.

I first heard Teeth of the Sea through their 2013 album “Master”, which remains a favorite.  The band currently includes Sam Barton, Mike Bourne, and Jimmy Martin.  This album also includes the talents of Erol Alkan, Valentina Magalett, Chlöe Herington, and Katharine Gifford.

Teeth of the Sea plays music that is difficult to describe.  Yes, I consider it progressive electronic for their usage of loops, ambient atmospheres, synthetic sounds, etc.  However, you could just as easily tag them as psychedelic or space rock, and maybe even noise, a bit of drone, a bit of trip hop, and other genres like industrial.  In fact, one of those other genres would be jazz/blues, as they offer heavy use of horns in a way that almost feels urban or like the music is being played in a small club in the 20s.  Add on top of that the fact that the band is obviously influenced by horror, and you have a band that mashes a widely diverse range of ideas into one smooth and frankly awesome sound.

“Wraith” is one of those albums that simply feels complete.  It feels like the specters of musical inspiration invaded the minds of these artists, and so you will find yourself cheering for them as transitions develop into fully satisfying songs.  Much of the album is led by the horns I mentioned above, and so you will get this dark, urban, and uneasy vibe overall. 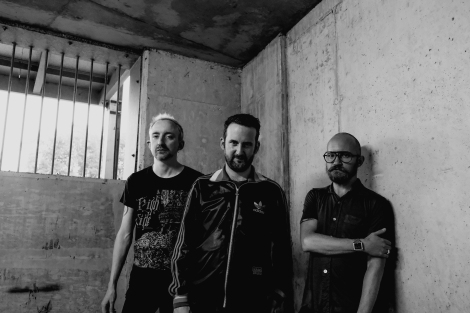 The album opens very strongly with its two singles.  “I’d Rather, Jack” is a fantastic song that builds and develops into a grand finale, going through lots of transitions.  Even better is “Hiraeth”, a song that features a lengthy horn solo that evolves into an electronic beat.

The album continues to show a diverse range of textures, as well.  “The Burning of Shieling”, for instance, features this burning synth groove up against horns, but “Fortean Steed” is more about beautiful harmony and atmosphere.  “Visitor” feels eerie and ethereal, and so I think you get the point.  The album never gets struck in a rut, and it flows beautifully and purposefully towards its goals.

My favorites are in the second half.  “My Wraith” is a musing, ponderous track that explores the horns in depth.  It is quite mesmerizing.  “Gladiators Ready” is my favorite on the album.  It could be called “upbeat”, I suppose, but it is the layering of the melodies that really attracts me.  I especially love the fiery beat that begins in the middle.

Teeth of the Sea continue to prove that they are true artists.  They never try to copy their past, always moving forward and trying new sounds and textures.  “Wraith” is a fantastic display of brilliant ideas, shadowy concepts, and just enough restlessness to make it fun.

Find Teeth of the Sea online: