Have you ever approached an album as if it were sacred?  I don’t necessarily mean it’s by your favorite band: I mean that the artist has such a history and imagination to them that your criticism, either positive or negative, cannot possibly mean anything?  That’s how I feel about the new Dead Can Dance album.  “Dionysus” released on November 2nd, and the results feel untouchable by my own words.

Dead Can Dance has a long history of making original music.  They’ve been around since 1981, and have produced nine studio albums since that time.  The band has had many members throughout the decades, but the primary two are Brendan Perry and Lisa Gerrard.  The credits for this particular album are a bit vague no matter where I look, but both of these musicians are credited as performers and producers on “Dionysus”.  You’ll hear many different instruments from all sorts of cultures around the world, as well as a variety of voices.  To my knowledge, Brendan only sings on a couple tracks, and Lisa can be heard on three or four at most.  This album is certainly more about their vision than about their personal performances.

There is no concise way to describe the music of Dead Can Dance.  They are who they are, and no one else really sounds like them, and they do not sound like anyone else.  Every album is a bit different in approach and scale, so comparing their albums is a futile exercise.  There are, however, some adjectives that come to mind when hearing “Dionysus” specifically.  I would use words like: intoxicating, hypnotic, haunting, monastic, tribal, ominous, and glorious.  You might infer from that list of words that this album is quite dark and yet somehow beauteous, too.  You would be right.

What does all of that mean?  This album specifically features tribal beats and looping rhythms that will delve their way into your very soul.  Dead Can Dance has always been global in their approach, and I feel you will hear Celtic and Middle Eastern influences here specifically, but the general point is for the music to sound primitive, ritualistic, and ancient.  The specific ethnic sound in the album is purposefully vague, with the goal of representing humanity in its basest form, rather than any one culture.  Being a concept album, each track has a part to play in the expansion of your mind (more on that in a second), and the 36 minute runtime helps achieve this goal by pulling you into an experience that you cannot escape and that you won’t want to leave until the journey is complete.

The concept behind this album is stated quite simply in the title: Dionysus, the Greek god of wine.  On a base level, the album itself has more to do with the mind altering and expanding properties of ritualistic drug use, as can be seen in many of the spring and harvest festivals for the infamous god.  In fact, the cover art represents a mask made by the Huichol of the Sierra Madre Mountains in Mexico.  They are famous for their yarn paintings and objects meticulously decorated with beadwork, and they use peyote as a sacred rite and ritual for the purposes of healing and mind expansion.  On a deeper level, the album is about celebrating the expansion of the mind, recognizing the unity of humanity, and appreciating our connection with Earth.  All of this plays out in fantastic production values that are chillingly present and echo with unnerving proximity.

The album is dividing into two acts and seven tracks.  The digital version will only list the two acts, however.  Act I includes: Sea Borne, Liberator of Minds, and Dance of the Bacchantes.  This first act represents Dionysus as arriving into our lands by ship.  He was the protector of those outside the norm of society, and this plays into the main themes of the album.  This act also features the titular god offering wings to the minds of men while also showing the ritualistic dances of women freshly freed from their patriarchal prisons.  Act I is a wonderful piece of art that feels fresh, like embarking on an unfamiliar journey.  It is enchanting and otherworldly.

Act II includes: The Mountain, The Invocation, The Forest, and Psychopomp.  This act takes us back to the birth and roots of Dionysus himself.  It also represents some of the ceremonies that celebrated his pre-eminence in creation, his call to humanity to abandon material pursuits, and his role in guiding people in the afterlife.  All of this makes you feel like you are in a haze of smoke and growth, and there is this sense of wholeness and even holiness. 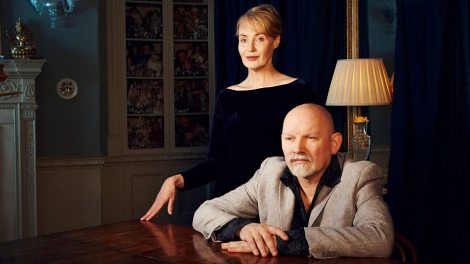 My favorite track of them all is “The Invocation”.  It has an intoxicating rhythm that feels like light and power.  The layers and layers of groove and rhythm build and build to a whirlwind of sound and color.  This song thumps and expands with amazing production, and obviously sounds phenomenal on a good system.

People are complainers.  Since this album released, I have seen a huge range of reactions, from fans saying it is their best album yet to some unhappy fellows literally cursing Brendan’s name and calling this garbage.  I’ve seen people complain about the lack of Lisa’s vocals, even though Brendan is featured even less.  I’ve seen people complain about the short runtime, obviously missing the vision of this fantastic album.  I’ve seen so many complaints, and it runs so contrary to the expansion of the mind that is portrayed here.  It is a sad commentary on how we humans tend to operate.

It turns out that I had much to say about this album.  “Dionysus” is a celebration of togetherness in humanity.  It offers hope through its looping melodies and peace through its hypnotic atmosphere.  It is a true work of art from every perspective, and you will not hear anything like this year.  It may not be for everyone, but I truly hope more people discover the shadowy goodness of Dead Can Dance.

2 responses to “Dead Can Dance – “Dionysus””