As most of you know, Riverside is my favorite band.  Approaching a new album from them is like adopting a new child somehow, as ridiculous as that sounds.  Their albums become part of not only my psyche, but also part of my family’s life and hopefully inheritance.  I’m serious about my love for this band.  So, with Riverside releasing their first album since Piotr’s passing, the feeling in my heart is graver and more somber than usual.  “Wasteland” releases on September 27th, and I have quite a bit to say about it.

Most people are aware that guitarist Piotr Grudziński passed away in Februrary 2016 after the release of “Love, Fear, and the Time Machine”, arguably their best album.  The band has moved on without Piotr, but chose not to replace him officially.  The band currently consists of Mariusz Duda on vocals, guitars, and bass; Piotr Kozieradzki on drums, and Michał Łapaj on keyboards and organs.  Maciej Meller, currently the guitarist for the band’s live performances, guests on several tracks; and Mateusz Owczarek guests, as well.

The Riverside sound is still here.  We still have that sweet melancholy that we all love, plus the bassy punch from Marisuz, the off kilter drums from Piotr, and the sweeping keys and hovering organs from Michał.  In those departments, nothing has changed, though the tone is a bit different and there is more contrast between grit and beauty.  This album is indeed heavier and overdriven in the guitar department, though primarily on three or four tracks at most.  Much of the album is more atmospheric in a bleak sense, not in the soaring emotion from past albums, often reminding me of the “Voices in my Head” EP.  In a way, the bleakness is indeed emotional: emotionally numb and searching for answers.  It’s a subtle change, but it is noticeable, especially if you are already a big fan of the band. 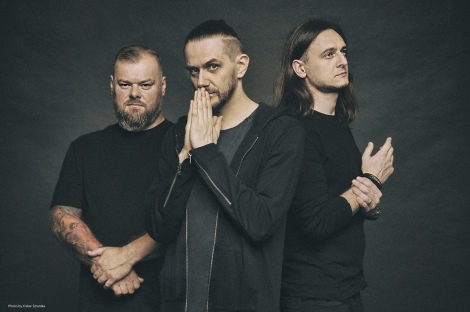 The lyrics, as usual, are fantastic.  The album tells a post-apocalyptic story, often feeling quite cinematic and nostalgic.  I don’t know all the details yet (I’m sure I’ll spotlight it eventually), but the whole idea of the story is obviously meant to reflect survival after tragedy.  Piotr’s death, as well as some other major events in Mariusz’s life, all play into this.  This album will make you cry.  It will make connect you with the band in a way you might not have done thus far.  Mariusz’s vocal delivery feels forlorn and sorrowful, too, and he uses his baritone voice quite a bit here.

Okay, let me get this off my chest: I’ve seen reviews thus far that base their entire rating on the fact that the band’s sound has changed somewhat.  Excuse my language, but no fucking way!  Piotr, my favorite guitarist of all time, passes away, and the band’s sound changed?  How is that a surprise?  How is that not an expectation?  How can we judge the band based on the fact that they have changed, instead of judging the new material by itself?  That is my approach here and on every review: Is this a good album?  My approach will not be: This can only be good if it sounds like *insert favorite Riverside album*.

I have some other emotions to get off my chest, too.  Piotr’s guitars were always sad, melancholy, and emotional.  He expressed his way into my heart, and truly changed my life.  It truly kills me to see him missing from the band photos.  On this album, the guitars feel mournful and heartbroken; almost lonesome and lost, and this all feels very appropriate.  The acoustic guitars are still comforting and warm, as Marisuz has always done those.  The soloing, however, is definitely different, and there are a few places where I thought “Piotr’s soloing would have been absolutely epic right there”, but then I realize that the desolate, mournful sound of the solos is quite fitting for this album.  That actually makes me love it more, since it is a constant reminder of Piotr, which is the album’s purpose, I think.  His absence is absolutely noticed and even cherished throughout this album.  Only a Riverside super fan would think that way, I suppose.

Yes, I’m going to go through this album track by track.  As Mariusz pointed out recently, the track list is similar to that of Second Life Syndrome.  The album begins with “The Day After” and ends with “The Night Before.  Both of these tracks are addictive and consist mainly of vocals and keys.  Duda shines with his interesting and catchy melodies, not to mention the thick layer of emotion.  The opener, especially, is stuck in my head constantly.

The tracks between are just as stunning.  “Acid Rain” is a fantastic track that begins with heavily distorted riffing, but transitions into a harmonious symphony of vocals.  “Vale of Tears” sounds quite different from anything they’ve done, what with the metallic riffing and soloing, but it’s catchy and the groove is undeniably awesome.  “Lament” is obviously mournful in tone, but I find it almost alternative rock in nature, too, and I love the effervescent chorus.  “The Struggle for Survival” is a ten-minute instrumental with some rather strange sounding parts, but one thing I noticed was this almost James Bond-esque vibe to much of it, reflecting the cinematic feel I mentioned.

Now for my favorites: “Guardian Angel” is one of my new favorite Riverside tracks on any album.  It is subdued, baritone, and simply beautiful.  “River Down Below” is another subdued, thoughtful track that builds to an epic solo from Maciej.  I literally tear up every time that solo hits, as it is emotional, but also because it clearly was not written by Piotr, so his absence might be the most poignant here.  Finally, the title track is absolutely amazing, with heavier parts and lots of harmony, but also with this overall Wild West tone to it.  It feels like a very cinematic Western score at times, almost in the way Mad Max feels like a Western—not quite a classic Western—but definitely going for the feelings of dusty desolation and forlorn wandering.

So, there you have it.  “Wasteland” is yet another amazing album from Riverside.  I can always tell when an album is good by whether or not my children gravitate towards it; and my son, Atlas, has been singing along with almost every song.  He loves it, and I love it, too.  Do I miss Piotr?  Obviously.  Am I super proud of my favorite band for continuing and honoring the memory of someone who meant so much to them and to all of us?  Absolutely.  They have handled this transition with care and emotion, and I couldn’t ask for a better follow up.  This album means so much to me, and I know Riverside fans around the world will embrace it with open arms.