I’m not really sure where to start when approaching a new album from A Perfect Circle. The idea that we have a new APC record to begin with is still shocking me a little.  The band needing no introduction at all, I’ll get right to the point.  The new album “Eat the Elephant” released on April 20th, and it is quite possibly everything I could want from a new APC offering.

While they do not need introduction, some clarity for the performances on the album is necessary. APC consists of Maynard James Keenan (vocals and lyrics) and Billy Howerdel (guitars).  If you look closely at the album credits, you will notice that Billy also played everything else on the album besides drums, and a couple of bass lines on a couple tracks.  The live version of APC includes James Iha on guitars, Matt McJunkins on bass, and Jeff Friedl on drums.  Maynard and Billy have mentioned that James “contributed” towards the album, but I’m not sure what that even means.

Going into this review, I think a little background on my perspective is needed. A Perfect Circle has long been one of my favorite bands.  They were the soundtrack to high school for my wife and me (yes, we were high school sweethearts), but I’ve never been a huge fan of Tool.  Reading the comments on the Internet, it seems like Tool fans are chomping at the bit for some new music, and expecting APC to sound like Tool.  APC has always been more ambient and abstract, rather than guitar-driven and heavy.  I hope Tool fans can get over that soon. 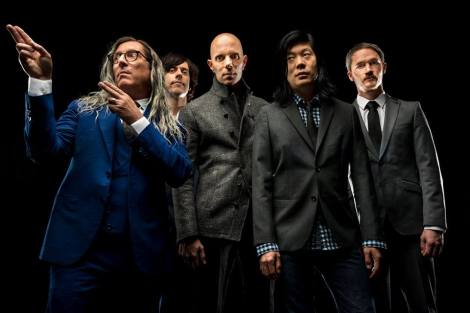 “Eat the Elephant” is an amazing album for various reasons. First, the music is stellar.  This time around, the band explores their ambient, spacey sound more than ever, complete with lots of shoegaze guitars, electronic accents, astonishingly good drumming, and an unexpected amount of gorgeous keys and piano.  Yes, this album doesn’t get that heavy but for in a few spots, and I think that is truly marvelous.  Additionally, Maynard sounds absolutely phenomenal on vocals, and the production is loud and clear as Billy performs his heart out.

The album is also a vehicle for Maynard’s philosophical and political trains of thought, and the lyrics are some of the best I’ve heard in years (this year has been strong lyrically, thus far). While his trademark playfulness and tongue in cheek statements are still there (see “So Long, and Thanks for All the Fish”), he gets not only very serious but also intensely profound, and many of the songs truly speak to me.  Maynard almost comes across as socially responsible, and that is something quite new.  On the other hand, the album title speaks to the idea of writing about topics that are the “elephant in the room” that no one wants to admit or discuss, but Maynard is not afraid to shove it down our throats.  I’m so glad for artists like that.

More specifically, “The Doomed” and “TalkTalk” speak to my opinions of modern Christianity, and it seems to be a common theme in the album itself. I personally am a Christian, but the sentiments of Christians who speak like Jesus but do not walk like Jesus strike me deeply.  I have been feeling the same way as I see Trumps fans (who claim to be Christians) defend every little horrific thing he does, even though they are simply working with the machine that ends up trampling the poor and less fortunate, which is the exact opposite of Jesus’ message.   This is definitely an interesting turn of tone for Maynard from earlier songs like “Judith”, and I’ll be watching for the new Tool album with great interest.

“Eat the Elephant” is definitely a difficult album to dissect, and it can take a few listens to sink in completely. I liked that the band released so many singles ahead of time, as that helped me process the full album quickly.  We’ve all probably heard “The Doomed”, “TalkTalk”, “Feathers”, and “Disillusioned” a million times by now, and those songs still don’t get old for me.  In fact, they represent most of my favorite tracks on the album.  You’ve also probably heard “So Long, and Thanks for all the Fish” with its playful vibe (yes, I get the Hitchhiker’s Guide reference), and you’ve heard “By and Down” before, even though the version here is reworked significantly with an orchestra, and it’s amazing.

The new songs bear some dissecting, though. Back in 2017, I saw APC live and they played “Hourglass”, and I was blown away by the fantastic electronic sound, and I loved the odd structure of the song.  Maynard even mentioned “prog” during the show, which shocked me.  While that song is ultimately my favorite on the album, I also love “The Contrarian”, which reminds me of the debut album; and the title track, which is honestly difficult to describe because it is so subtle.  I also love “Get the Lead Out”, which ends the album with an electronic punch that grows over time, rather than being in your face.

Overall, “Eat the Elephant” is totally worth the wait. I never really expected to hear another APC album, let alone love it this much.  Maynard continues to show why he is a fantastic front man, even if he is a bit of an asshole.  He’s a lovable asshole, though, even though I won’t pay $60 for a shirt.  I do thank Maynard and Billy for giving us at least one more APC experience, and I truly hope it doesn’t end up being their swan song.

One response to “A Perfect Circle – “Eat the Elephant””