It’s always interesting when an established artist tries something new.  Tuesday the Sky is a new side project from Jim Matheos, guitarist from Fates Warning.  “Drift” is definitely something possibly out of the comfort zone of his typical fans, and I commend and applaud him for sticking his neck out there.

Tuesday the Sky, like I said, features Jim Matheos on guitar and bass.  Other musicians include Lloyd Hanney on drums, and then guest spots from Anna Lynne Williams on vocals and Kevin Moore on keys.  Tuesday the Sky is not the typical progressive metal you might expect from Jim, but is instead more in line with ambient artists like Nordic Giants or Sigur Ros.

The name “Drift” is definitely indicative of the style.  The music is ambient in nature, with plenty of more experimental guitar techniques, subtle electronica, and an overall ethereal feeling to the album.  The album is sometimes about textures and atmospheres, and other times it is about the progression of a certain melody.  Jim has indicated that this side of him arose during the composition of Fates Warnings latest album, “Theories of Flight”.  It seems that he was working on a bonus track in the ambient vein, but he realized that it wouldn’t work for a progressive metal album.  So, he went and wrote a whole new album. 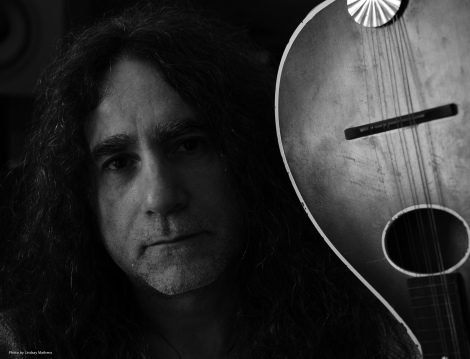 Jim’s guitars and bass are both really well done, as expected.  He plays around with all sorts of styles and ideas, but he also gives us some straightforward soloing, too.  There are some truly jaw-dropping moments in all the sliding scales, electronic effects, and wandering melodies.  I do love Lloyd’s drumming on this album, too, as it’s hefty and really sets the tone when it is present.

So, I’m glad that Jim chose to do something different, but I unfortunately am not fully on board with it.  Don’t get me wrong: I love ambient music.  However, “Drift” is rather uninteresting for the first half.  The first four tracks lose my interest quickly, even though they are pleasant and get going fairly well at times.  They are good music when you are working on a project, but I don’t really see myself wanting to hear them when I’m wanting to dive into a meaty album.

For example, “Today the Sky” is an enjoyable little piece that never really goes anywhere, and it ends just when it seems to be escalating towards something.  “Kite” is much the same way, though it’s more about textures than mood; and it does get going near the end, though it isn’t very memorable overall.  Other tracks on the album are much the same, and they sound indistinguishable at times.

There are also a couple of tracks that fall somewhere in the middle.  “Vortex Street” and “Westerlies” have some eerie female harmonies from Anna that are nice, but both songs feel more like enjoyable interludes than true songs.  Indeed, track “Roger Gordo” is similar, though it contains samples of dialogue instead of vocals.  It also feels like an interlude, however.

The last half of the album contains some great songs, though.  “Dyatlov Pass” is an awesome track that begins with this distorted atmosphere and progresses into the only metal portion on the album.  It really feels like what I was hoping the whole album would be.  There aren’t many artists that combine ambient and metal, and this song nails that balance perfectly.  I would have loved to hear Jim craft a full length album exploring those ideas.  The title track, “Drift”, is another fantastic song.  It has this weird bass tone to it that I love, though it also does end before any real progression can happen.

I think that is the crux of the situation here.  The music never gets as interesting as Jim’s stated influences, and the songs are almost too short to the point where they end just when you think they are going somewhere remarkable.  Overall, the album is enjoyable, and definitely a solid choice for when you are working or reading.  In other words, it isn’t distracting and would help me focus pretty well. “Drift”, however, feels like there is something missing, and there are only a couple tracks that contain any real meat.  I do hope that Jim continues with this side project, however, as Tuesday the Sky could really become something amazing.  I do think he’ll need to balance his metal side with this new ambient style to create something that will really stand out from the pack.