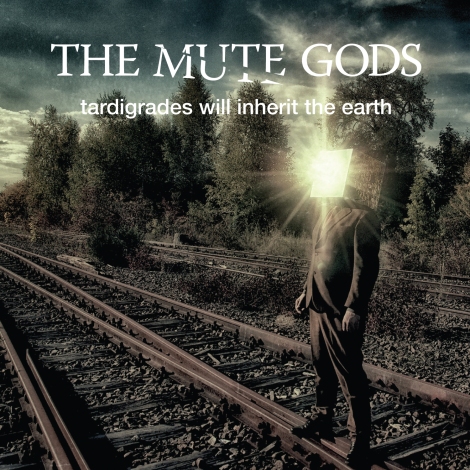 Well, there’s another album from The Mute Gods releasing in a week or so.  I approached this one with an open mind, as I rather disliked the debut album for a myriad of reasons, ranging from awful lyrics to dull music.  I was rather disappointed because Nick’s bass was probably the most uninteresting performance I had ever heard from him, and his pseudo-philosophical lyrics came across as ignorant whining more than anything else.  After hearing the single “We Can’t Carry On”, I did have a glimmer of hope for the follow up, called “Tardigrades Shall Inherit the Earth”, despite the political bent.

The Mute Gods consists of the great Nick Beggs on bass, guitar, keys, and vocals; Roger King on keys and guitars; and Marco Minnemann on drums.  Lula Beggs and Lauren King provide some backing vocals, too.  Now, even though these musicians are all masterful in their craft, I can’t help but feel like Nick Beggs is quickly becoming one of the most pretentious, annoying prog personalities out there.  Between his incessant whining, theories about aliens, and his surprise nude photos; I made the decision a while back to delete him on Facebook.  It’s not that his theories and observations are false: It’s that he is annoying to the Portnoy degree.

So, yeah, my observations on the album have been tainted a little bit.  Approaching the album itself, though, the first track, “Saltatio Mortis”, is a beautifully orchestrated intro with some soulful guitar that reminds me of Hackett something fierce.  I love it.  The next track, though, is not the same picture.  “Animal Army” is not only a musically weak and annoying song, but the lyrics have switched from whining to full on malevolent musings against humanity, or at least a despair about our future.  I was afraid that this horrible song would be representative of the rest of the album.  Thankfully, it is not.

Fortunately, the music on this album has far more depth than on the debut.  The first album was more of a pop rock album, honestly; while this album features a wider range of instruments, more instrumentals, some truly soulful solos, and even some major orchestration.  It’s just bigger and better, and the songs are mostly just better composed and more enjoyable.  I especially like “We Can’t Carry On” with its addictive groove, the title track (my favorite) with its cool chorus, “Lament” for its quiet instrumental quality, and “Stranger Than Fiction” for its hopefulness.

The performances here are also elevated over the original.  This time, I hear more in the way of keys from both Nick and Roger, featuring some sweet synth solos and just more presence overall.  Guitars are also better, with more edge and just more personality.  Marco’s drumming is as relevant as ever, but it is joined by better bass composition from Nick this time.  Nick’s bass is like night and day from the previous album.  Finally, Nick’s voice ranges from annoying and silly to melodic and high pitched, in a good way.  I’m not a fan of his voice overall, but I do feel like he has improved this time; as he does achieve some rather pleasant tones, especially with the backing vocals really creating some catchy harmonies.

The lyrics are still mostly garbage.  His whining has gotten more aggressive and fatalistic, though I’m happy that he’s addressing the human condition as a whole now instead of specific institutions.  I do also appreciate that the album puts you through a slog of darkness and despair, but breaks into surprising hope at the end.  I do like that a lot.  However, I just don’t like the way Nick writes or his attitude.  You’d think that he’s a young twenty-something with a hard on for the world.  As it stands, I’m not sure he can get a hard on anymore, and I think he needs to grow up and try to empathize with other viewpoints a tiny bit.

Overall, I’m still not a big fan of this project.  My review score reflects my distaste for much of the lyrical content, as the music itself is another point higher, or so.  However, I take an album as it is meant to be: a complete package.  This album could have been less political and more unifying in its humanist theme, as many other such albums have done.  However, if you are in it for the music alone, this album is much more satisfying and showcases more of the potential that these three awesome musicians have.