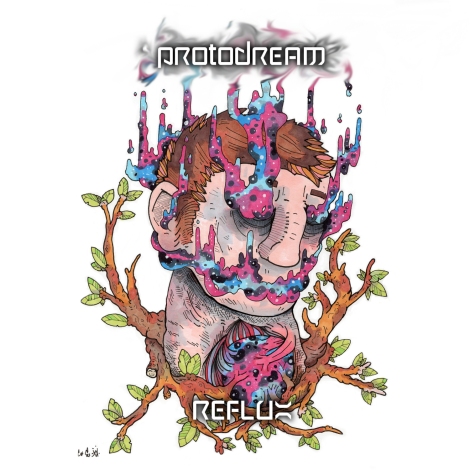 Last year, I had the pleasure of reviewing a new EP from Omniverity, a band that is local to where I live.  This awesome EP was called “Eclipse” and it featured progressive metal with lots of Porcupine Tree and Pink Floyd influence.  At the same time, though, some of the minds behind that band also have another project called Protodream.  Looking at their Bandcamp page, I saw tons of labels for their music, so I was unsure of what I would experience.  I have to say, though, that this EP is an impressive start to what could be a masterful, unique output.

Protodream hails from Akron, Ohio, my hometown.  Their debut EP is called “Reflux”, and that name seems like an appropriate title, at least in a more colorful sense (hence, the cover art).  The band consists of just two members: Mac Guarnieri and Tim McWilliams, both listed merely as “instrumentation” (after you hear the EP, you will probably know why), and both are members of the aforementioned Omniverity.

These two combine electronic, ambient moods and slightly haunting piano melodies with ethnic ideas, sounds of nature, and warms tones to create a rush of feelings, sometimes cold and sometimes warm.  This dreamy music often gets a little sci-fi, especially with the filters on the vocals, but the results are always interesting, never annoying.  Overall, it really feels like this stream of consciousness, kinda jumbled and distorted, but expressing emotions and transitions that make total sense to me.

“Reflux” consists of three songs.  First off, we have “Shapeshifter”.  This track starts the EP with a rougher, more mechanized sound.  It feels spacey and electronic, not to mention the world music accents.  It’s very much an ode to humanity, at least in feeling, and it’s rather cinematic, too.

The second song takes a wild turn towards something a little more normal.  “Short Term” is an acoustic ballad with a great central guitar hook and this uplifting feeling.  It’s a great song with great melodies through and through, and provides a touchstone in the middle of two very innovative tracks.

The last track, my favorite, returns to the style of “Shapeshifter”, but focuses more on nature than on human sounds.  “Absinthe” is significantly eerier in some aspects, but there is also this organic feeling to it, not to mention this more hopeful feeling than on the first track.  Birds and rushing rivers back this strange but uplifting track, and the vocal melodies are also more emotive and harmonized, as well.  For some reason, I get snippets of The Beatles in the vocal melodies here.  The track transitions into a stormy, distorted climax near the end, only to break into a soft melody once again to end the EP.

To be honest, “Reflux” is nothing like I was expecting.  Protodream doesn’t play the music I expected, either.  It’s lighter, but heavy in mood, still.  Mac’s vocals are eerie and beautiful, and the rest of the instrumentation sort of melds together into this magnificent gelatinous tapestry.  The guitars are also of note here, though; with haunting, more post-metal elegance.

I love this EP because it sometimes feels sci-fi, sometimes horror, sometimes fantastical.  It’s all over the place in tone (in a good way), but the composition is always on point.  These two projects, Omniverity and Protodream, have enthused me for the local progressive scene all the more, along with bands like Maid Myriad and If These Trees Could Talk.  Go buy this $3 EP!