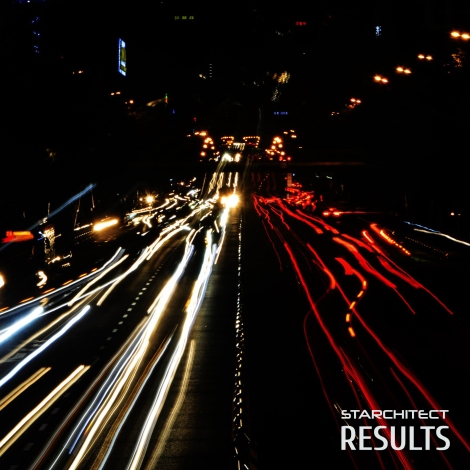 Results is the second studio album released by Ukrainian post-metal band Starchitect.  This sophomore LP follows their debut, 2011’s No, which was carried by Slow Burn Records (a Russian metal label, inactive since 2014).  Released independently in January, Results is a decidedly modern expression of metal, borrowing from thrash and hardcore to create something explosive.  I use that adjective intentionally, because there isn’t a soft track on this album – no acoustic number to demonstrate the band’s softer side – which means that, for 59 minutes, you’ll be head-banging to the ragged, grinding guitar riffs laid down by Dimitry Zalozny and Oleksandr Sikorskyi.  In fact, with the exceptions of the ambient “Tensions” (the album’s approximate halfway point); the sharp, simulated acoustic guitar of “Minaria’s” conclusion; “Wastewater’s” momentary breakdown; and the restless first half of “Mila,” Results never even delves into anything truly melodic.

Of course, if you’re listening to Starchitect, you’re most likely not looking for a whole lot of melody.

Hailing from Kherson in Ukraine, Starchitect’s young, four-man lineup includes Zalozny and Sikorskyi on guitars (Oleksandr also growls), Primus Man on drums and vocals, and Stas Zelinsky on bass.  Their playing is cohesive and complimentary, the undeniable result of working together for more than half of a decade, and Results is a collection of fairly technical music – as far as grunge/sludge/post-metal goes, that is.  But in that regard, it’s also only fairly interesting.  Invariably, the songs represented here are an arbitrary grouping of syncopated, multi-metered, and off-kilter breakdowns, punctuated by the occasional vocals – and by “occasional,” I mean you might hear one or two growls per tune, and sometimes none at all.  Zalozny and Sikorskyi share some neat give-and-take riffs and implement a handful of guitar techniques for interesting textures, sometimes working in contrary patterns to create colorful dissonance.  Zelinsky’s bass parts sync tightly with Man’s drumming, anchoring the band as they move through time changes.  But ultimately, everything is cyclical and repetitive.  Some of the cooler things the band does end up beaten entirely to death with far too many passes through the same riff.  I suppose that’s the sludge-style: messy and gratuitous.  But whatever it is, it sacrifices nuance for aggression, so even the technical elements of the writing become obscured by the sheer wall of volume.

These tracks are not dynamic.  They’re just loud.

The vocal work here is also problematic for me.  While the style of screaming is appropriate for the material, there is absolutely no variation or complexity to it.  Ultimately, having vocals at all – with the exception of Results’ second track, “Black Circle” – seems like an afterthought, an additive to Starchitect’s planned material.  The album’s emphasis is clearly on its grinding compositional elements, so perhaps the imbalance is intentional, but I’d rather hear vocals that feel more carefully crafted.  That, or none at all.

All that said, I’d like to point to the diamond in all this rough, “Mila,” as a quality example of the material Starchitect is capable of producing.  This is the only song on Results with any real semblance of dynamic variation: it implements guitar technique and melodic textures alongside heavier segments of chugging, incorporating all the important staples of metal the band favors while still doing something.  It unfortunately suffers from the same repetitive qualities as do the rest of Results’ tunes, but of all the songs on this record, this is the one that trends the most toward creative variety within the genre.  Actually, the last three full tracks of Results are pretty good (“TTT” is another little interlude with some cool guitar stuff, but it doesn’t really add anything to the album’s overall structure), and could have been a quality EP by themselves without the static that is the first 60% of the album.  “Interlocutor” in particular is a mammoth piece of writing with some interesting ideas, and the final tune – the album’s namesake – is a hard-hitting, 9:00-minute frenzy.

There’s a lot of influences to be cited and comparisons to be made.  I can hear Animals as Leaders in Results’ extended instrumental sections.  Rosetta and Intronaut have been cited by other reviewers as comparable.  Tool has some of the same down-and-dirty mentality as well.  Not unlike any of these other acts, Starchitect is a group of musicians with chops and vigor.  However, their collective effort , while ambitious, is lackluster.  Crushing riffs and chugging patterns only accomplish so much, especially when there is so much metal out there implementing so many more interesting elements of songwriting and craftsmanship.

I’ve found that the trick with this messy kind of metal (if it’s not already your thing) is to crank it up and throw yourself into it.  No dipping your toes first or you’ll never get in.  It’s catastrophic and overwhelming.  Starchitect have the potential to write music that not only harnesses this type of chaos, but also expounds upon it.  Results does not produce what its title might suggest, but maybe the band’s third LP will more fully access their potential in the future.