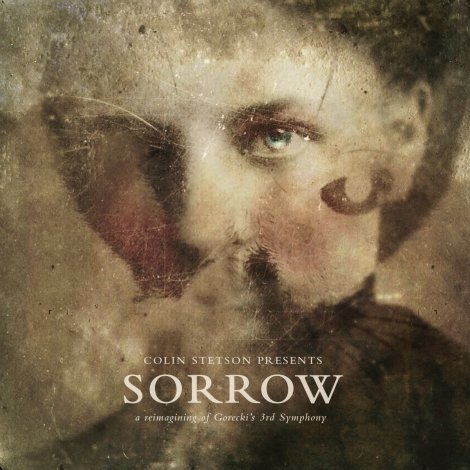 After a handful of ambitious and experimental solo records, and a wonderful collaboration with Sarah Neufeld last year all gaining him some reasonably surprising widespread praise, Colin Stetson has decided to use his status as indie rock’s bridge to the classical and experimental world to create something a bit different – a full re-interpretation of Henryk Górecki’s 3rd Symphony, with a different structure and musical makeup. Górecki is one of 20th Century Classical’s most notable figures in terms of bridging the sounds of traditional 17th and 18th Century symphonics with the experimental and minimalistic threads that classical music nosedived into in the 20th Century. This symphony, known as The Symphony of Sorrowful Songs after it became more popular with its 1992 CD reissue, saw Górecki merge these eras into a traditional symphonic form, whilst keeping his own traits of dissonance and repetition within the music. The combination of accessible and traditional with avant-garde and minimalist naturally draws parallels with Stetson’s own work, so this project does make some logical sense. But, if anyone is coming here expecting anything on the line of Stetson’s previous solo work, you’ll be disappointed. If you’re looking for a performance of Górecki’s 3rd as intended, then you shouldn’t be here in the first place. If you’re looking for powerful, modern-sounding and emotional music, with some classical influence, then this is absolutely fantastic.

This is probably Stetson’s most accessible work to date, but not because it exists outside the bounds of his saxophone-led minimalistic style. If you took the vocal parts out of this, played around with it a bit more, and didn’t tell anyone that it was a reinterpretation, this would be praised as one of the best post-rock records of the year. Stetson may have based this on an orchestral piece, but for a great deal of it sounds as modern as can be, with the long-form structure and use of dynamics being far more in common with modern post-rock and ambient music than classical. To add to this, there are guitars and drums here, something that I’m sure a few purists will get their panties in a knot about, but they greatly improve the timbral diversity on offer here. This is certainly not a re-recording of a symphony, it’s a re-interpretation of it as if it were written in 2010.

The album is split into the three movements, which correlate mostly to the traditional three movements of the original piece, with some difference in length, most notably that the final movement is almost five minutes shorter than the original orchestral recording. The structuring is mostly true to the original, but Górecki’s minimalistic influence in his composition allows Stetson much freedom with the lengths of certain segments – many sections here have no specific parts, with drones and subtle improvisations being a nice, modern addition to this. I really don’t feel like this could have been done with any other composer – it is Górecki’s droning and departure from motif-led classical that allows Stetson to indulge in post-rock, drone and ambient in this reinterpretation.

The modern timbral diversity here is also one of the more interesting aspects of it, particularly when viewing this as a recording of the symphony with many different sounds. While Stetson himself takes a backseat in this performance-wise, the symphony opens with the familiar sound of his deep breathing and clinking on a demonically low-pitched baritone saxophone. Ironically, I do feel that Stetson is the weak link on the album at times in terms of the sounds, particularly with that cumbersome baritone, which clunks around in dour tones underneath uplifting and vibrant string parts.

Stetson with frequent collaborator Sarah Neufeld, who appears on Sorrow as first violin

I must admit my slight rock music bias in saying that I think the best part of the reinterpretation is the introduction of electric guitar and drums, particularly during the first movement’s ferocious crescendos. The orchestral sounds, and even the newly added saxophones, give a beautifully smooth texture to the majority of this, and while it is wonderful, the tremolo guitars and pounding drums just give a little bit of crunch and edge to the more violent moments. To those who may be skeptical (and I don’t blame you given the many cringeworthy attempts to hamfist guitar into a symphony that have gone before), the use here is very subdued and tasteful – the first movement has a lot in common with a band like Godspeed You! Black Emperor, particularly a song like “Storm”, which is led mostly by the string and horn section, with the guitars just being used to give a little extra punch. The use of primarily tremolo-picked guitars is an interesting one as well, but I find it works very well in meshing the timbres – a straight electric guitar could sound incredibly out of place.

The way the piece flows is also reminiscent of the Canadian post-rock gods, and though the vocals are far from anything they would use, the way the first movement dies down to a whisper before the first inclusions of Megan Stetson’s soprano is not dissimilar from a standard Godspeed 20-minute piece, particularly in the ominous mood given out in the quiet sections by the guitar and strings. The reintroduction of the whole orchestra amongst a wash of cymbals is undeniably the highlight of the symphony, with a wonderful balance of tension and resolve carrying the piece to its sonic peak. The manic drumming and droning guitars that carry the first movement out create one of the best atmospheres I’ve heard all year – twisted, dark and intense.

I’ll admit that the rest of the symphony doesn’t quite stand up to the 28 minute monolith that is the first movement, but it no doubt continues the brilliant mood throughout, with some wonderful sections in there too. The second and third movements feature a more central performance from the soprano, and despite looming around quality moods and atmospheres, the symphony never truly returns to the emphatic intensity or emotion of the first movement. This is really my only nitpick with this as an album, a top-heaviness that lessens its overall impact as you sit through it, but as it stands it is an undeniably excellent record. A beautiful combination of classical ideas with modern post-rock and ambient, Stetson has moulded a piece of music that seems so odd in writing but works impressively well in practice. It’s not necessarily something I’d want to hear more of, mostly because I cannot think of many other composers whose material would allow for the improvisation and ambient influence here, but as it stands it is a great achievement.