Back in 2013, I was pleasantly surprised by an album in my mailbox called “Good Morning Dystopia” by budding progressive/psychedelic group Osta Love.  This two piece band delivered a debut that was insecure and melancholy lyrically while being Floydian and atmospheric musically.  Slow, somber, and almost fearful, Osta Love’s debut really dug itself into my brain.

Two years later, Osta Love is back with an album that is quite different in some ways.  First of all, “The Isle of Dogs” features two additional musicians.  Originally composed of Tobias Geberth and Leon Ackermann playing just about everything, the band now consists of Tobias on guitars and keys, Leon on drums, Oliver Nickel on bass, and Marcel Sollorz on keys and vocals.  The addition of two more minds here has had quite an effect on the music.  The band has veered away from the cold insecurity of their debut and sprinted toward a lovelier, brighter, and more whimsical sound. 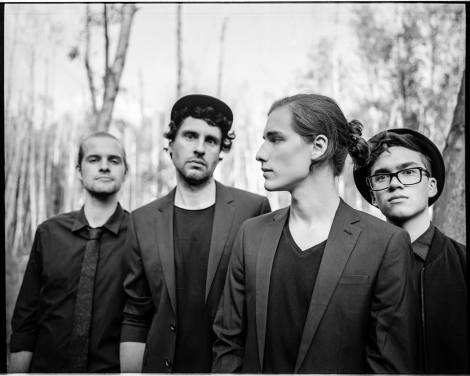 “The Isle of Dogs” is in every way better than its predecessor.  It is an album of serene journeys, featuring earthy and intuitive passages that make you feel connected and at peace.  Instead of songs about reclusive tendencies and nonexistent privacy, this album pines over rivers, seas, and hills, projecting feelings of flourishing, unearthly peace and contentment, yet there is always an element of searching and wonderment.  And the music is written in such a way that you feel like you are there, floating over the countryside.  From dawn to midnight, the album just feels so good.  For example, the track “The Sea” is brilliant songwriting.  It begins with a long oceanic tone that sets an expansive, blue atmosphere for the song.  Add to this lyrics about longing and nostalgia, and you have a song that will strike chords in your heart and your brain simultaneously.

“The Sea” is a good example of exactly why this album works so well.  It’s simple, as it doesn’t contain technical passages or crazy musicianship.  Instead, the music is pleasant, thematically on point, and sets a foundation for feeling and beauty.  It’s apparent that keys are the primary driving force for “The Isle of Dogs”.  Beauteous piano, satisfying synth solos, and a general sweeping feeling are all strong ingredients here, and the simple yet completely appropriate bass and drums along with some tasteful guitar solos work to keep the Floydian vibe in here, though it’s really only hinted at when compared to the first album. But, do you know what the real star of the show here is?  The vocal harmonies.  On the first album, the vocals were great, yet very raw and secluded.  On this sophomore album and with the addition of Marcel to the band, Tobias and Marcel are able to crank out some harmonies worthy of anything that The Moody Blues ever did.  In fact, “The Isle of Dogs” feels exactly like a collision of Pink Floyd with The Moody Blues.  It’s jazzy, funky, and experiential in feeling, yet it still has that steady pace and soulful soloing.  “The Isle of Dogs” also has much more variety in song styles, which, of course, is required if the band wants to achieve the thematic feelings of the songs.  From the rolling joy of “Green Hills of Home” (maybe my favorite) to the stark beauty of “The Sea” to the glorious harmonies and soulful solos of “Moonshine at Midnight” to the searching emotions of “Translucent Engineering” (about writer’s block), there are plenty of different ways that these musicians express themselves this time.

And through it all, Osta Love has arrived as an entity of their own.  I only point out some influences to give you an idea of their musical style, as this band sounds unlike any I know of right now.  So, whether it’s the pensive verses, the rising harmonies, or the funky synth solos, “The Isle of Dogs” is a grand album that bests the band’s debut.  It truly is an album that allows you to take flight and view the vistas in your mind.  Ultimately, it feels like home.