I was really surprised, to say the least, when I saw Caligula’s Horse was signed to Inside Out Music earlier this year.  It was an immensely satisfying announcement because I was starting to lose hope that major labels would ever start to notice the vibrant Aussie prog scene.  Needless to say, I was thrilled that CH was finally getting some recognition.

After their amazing debut called “Moments in Ephemeral City” and their follow-up called “The Tide, The Thief & River’s End”, CH has been positioned to take prog by storm with their heavy alternative prog sound.  Their new album “Bloom” is exactly what these guys needed to release right now.  As a band, they distinguish themselves from other Aussie bands by sounding less sci-fi and less like Karnivool.  Instead, they definitely take inspiration from djent, A Perfect Circle, Opeth, and other such alternative prog bands.  The results are miraculous, in my opinion, as they seem to be able to balance chugging, tight riffs with glorious melodies and intense emotion.

The band is made up of Jim Grey on vocals, Zac Greensill and Sam Vallen on guitars, Dave Couper on bass, and Geoff Irish on drums.  Jim Grey is also the lead singer for Arcane, another Aussie band that released an amazing double album this year, “Known/Learned”.  Jim is definitely a dynamic frontman with his glorious beard and unbeatable voice.  Dave and Geoff provide a tight, controlled rhythm section that is pretty much unrivaled this year.  In the middle of that, Zac and Sam let themselves loose upon the fret boards, killing it on both the heavy bits and the solos that seem to emanate so naturally from the complex time signatures. 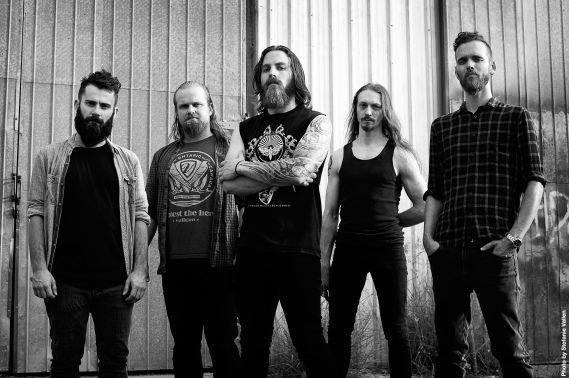 “Bloom”, however, is also a bit of a departure for the band.  It is a fresh, rich album of floral arrangements and shoulder-bobbing rhythms.  The gorgeous cover art is a good representation of this, with the earthy, flowery scene juxtaposed against the jagged edges.  Like salty and sweet, the two tones mesh to create a higher experience.  That is exactly what this album sounds like!

For instance, take the second track “Marigold”: From its opening moments, it boasts an addictive, swaying groove that is as impressive and technical as it is pure fun.  That same thing could be said about the entire album!  “Bloom” is the intersection of various grooves that link up perfectly.  Of course, the band provides the softer moments, too, with tracks like the acoustic final track “Undergrowth”, a fitting title for an organic, very real song.  Along the way, tracks such as “Firelight” and “Dragonfly” provide the median for the balance of heavy and soft, while “Rust” gives a little twist on the whole formula.  Overall, though, “Marigold” and “Rust” are my favorites.  Why?  Well, “Marigold”, like I said, is incredibly catchy in its groove.  “Rust”, however, is slightly angry, possibly, and includes polyrhythms of the highest order all while Jim belts out the most interesting lyrics on the album that seem to balance the beauty and organic themes of the album with a dirtier, grittier message.

Inevitably, this album will be compared to Arcane’s new album “Known/Learned”, as they share Jim as vocalist.  I’ll say right now that I cannot decide between the two!  Both are amazing, with Arcane leaning to longer compositions and less polyrhythmic activity, I suppose.  Both albums, however, showcase the incredible talent that Jim has, especially as he distinguishes himself in his tone and range and energy.  Caligula’s Horse backs him incredibly well, too, contrasting his voice with music that is technically mind-blowing at times and delicate in others.  Inside Out Music has definitely made a stellar choice in recruiting this band.

Stop and smell the roses.  Don’t miss this release from Caligula’s Horse.  I hope it is a sign of huge things (and a US tour) to come, but I hope it casts a spotlight on the Aussie prog scene, too, as that creative continent deserves to succeed.  “Bloom” releases on October 16th worldwide and on October 30th in the USA.