Every once in a while, an album appears that is impossible to rate or review.  I always try my best, but I often feel like I have missed the mark in some way.  Sometimes, a mere review cannot offer the insight needed.  I feel this way about the new solo album from Aleah Stanbridge.  This self-titled album released on July 1st through Svart Records.

Back in 2016, legendary vocalist Aleah Stanbridge passed away after a brave battle with cancer.  Many of her fans know her as just “Aleah” or as “Aleah Starbridge”, a fitting title.  She had just released an album with her husband, Juha Raivio (of Swallow the Sun), under the band name Trees of Eternity.  The album was darkly evocative and brutally emotional, recounting some of Aleah’s last thoughts.  Aleah herself was well known for solo work and also collaborations with Swallow the Sun and Amorphis.  Juha, however, wasn’t about to let Aleah’s legacy fade that quickly.

Juha determined to release a solo album Aleah was making at the time of her death.  This is brought to life in this self-titled album, a work that feels like some sort of closure for both Juha and also Aleah’s fans.  It is truly a vulnerable, gut-wrenching experience.  The lyrics are deeply personal, and the music ranges from acoustic ballads to post progressive; feeling cinematic, electronic, and nuanced.  The shadow of the doom genre certainly is cast across all of this, and appropriately so.  Juha, then, has given us one last gift from Aleah, and it is a spiritual experience.

Looking at the tracklist, you will find 15 tracks spread across two discs.  The first disc includes nine songs that are acoustic ballads, some possibly being songs that weren’t officially finished by Aleah.  The second disc contains six songs that are deeply layered and completed, like a proper album.  There is some crossover between the two discs, and you will find that the acoustic versions are generally shorter by a minute or so.  More specifically, “Open Sky”, “Closing Under Pressure”, “Water and Wine”, and “Terrestrial Torrents” are only on disc one, and “Inverted Enlightenment” and “The Tower” are only found on the second.

The lyrics on this record are absolutely stunning, not only in their technique and artistry, but also in their emotional impact for this situation.  Many times, it feels like Aleah is reaching out from beyond the grave, granting and blessing Juha with grace, peace, and healing.  It feels like she is reaching out to her fans in this way, too.  There are moments where I cannot help but cry because the lyrics are so potent, so densely impactful.  In that way, this album is a riveting masterpiece.

The music is amazing, as well.  While the acoustic disc is exactly that, acoustic ballads with Aleah’s whispering and shadowy vocals, the second disc opens up quite a bit.  The music on the second disc is dark, often orchestral, and always layered with many sounds, beats, and textures.  Above all, the music is atmospheric and intoxicating, and Aleah’s vocal hooks are powerfully performed.

The first disc has some standouts, for sure.  I love “Open Sky” and “Water and Wine” specifically.  The former feels determined and laid bare emotionally.  It is haunting.  The latter has an unbelievable hook that Aleah offers with little effort, but amazing results.  The entire disc is beautifully wrought, and I find it interesting that it is the first disc, not the second.  That makes me feel like Juha wanted Aleah’s raw vocals to be the primary focus for this release. 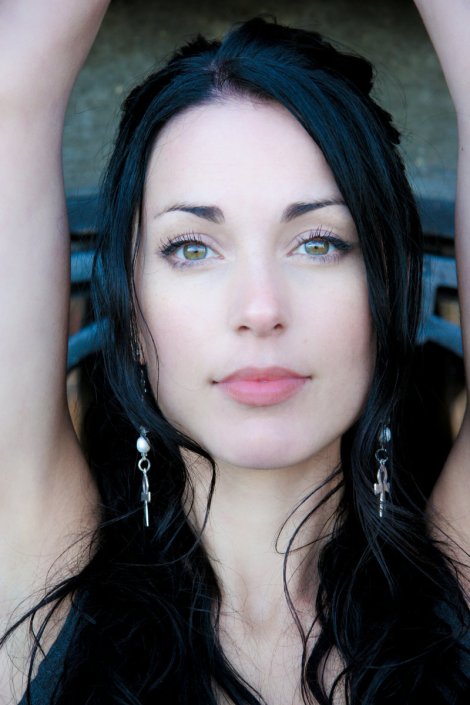 The second disc is basically an album unto itself, clocking in at about 38 minutes in length.  This is, without a doubt, one of my favorite albums of the year, in fact.  Each and every track is absolutely fantastic, and one track after another hits hard and harder still.  “My Will” starts this off with a gently winding, haunting song with delicate vocals and just an overall sense of compassion and power.  It was immediately one of my favorites, especially for its strong chorus.  “Sacrifice” comes next and finds its power in Aleah’s hushed chorus that is somehow also super addictive.  Anilah offers her services as a guest on this track, I believe on backing vocals.  “Inverted Enlightenment” follows, and this track might be one of my favorite this year.  Besides having intense lyrics, it is a bit of a slow burn, but opens up in the second half with violin, catchy vocal lines, and such an amazing climax.  What a desperately sad, yet amazing song!

The last three songs are “Vapour”, “The Tower”, and “Breathe”.  There is something about this trio that is so memorable.  “Vapour” is mysterious and even unnerving, with an orchestral climax that feels cinematic and otherworldly.  “The Tower” has more of a beat than any other song on the album.  It gets going from the very first notes, and it builds and builds into more and more layers of beauty and meaning.  Finally, “Breathe” is like a soft declaration that Aleah will live on forever in her music.  The music itself is poignant, and the subtlety and nuance here cannot be overstated.  The final minutes contain a gorgeous synth solo that brings all of the feelings to the surface, and so ends an album that can leave quite an emotional weight upon its listeners.

Juha has done a remarkable job bringing this vision to life.  Aleah’s swansong is glorious and spellbinding musically, but its impact is felt even more through Aleah’s shadowy voice and moving lyrics.  If this album doesn’t bring you to tears, I’m not sure that you have a heart beating within your chest.  I am so happy that such a fantastic album could celebrate the legacy of such a talented artist as Aleah Stanbridge.  I can’t fathom the pain Juha has experienced, and I know that I would be beyond myself if I ever lost my wife, Tiffany.  I hope that releasing this record will help Juha and Aleah’s fans find healing.