I’ve been discovering all kinds of electronic music this year, but it’s always great to see a band I already know release something amazing.  Aesthesys last wowed my senses with 2018’s “Achromata”, and I believe their brand new album “Alignments” might be even better.  The album released on May 28th.

Aesthesys (which means “a sensation of touch”) hails from Russia.  The current member list includes: Sasha Coudray on bass, Artem Taganov on drums, Victor Krabovich on electric guitar and keys, and Nik Koniwzski on violin and keys.  Notice that they have a full-time violinist, and that plays greatly into their overall sound.

The band plays instrumental music with many ingredients.  Their music sounds illustrious and whimsical with progressive rock elements bolstered by violin passages and accents weaving their way around the rock rhythms.  They have some neoclassical nods here and there, mostly haunting and somber atmospheres created by the violin, but the music is primarily about energy, drive, and power.  Many passages come across as being akin to math rock in that commanding, complex rush of performance tinged with artistry and beauty.

One thing that sets Aesthesys apart is their use of electronica.  On this album, I daresay that it is more prominent than ever.  Some of the tracks are almost completely electronic in tone, some even casting shades of Vangelis or Tangerine Dream.  Even if all you know of that genre is Stranger Things’ intro song, you will still find something to love here. 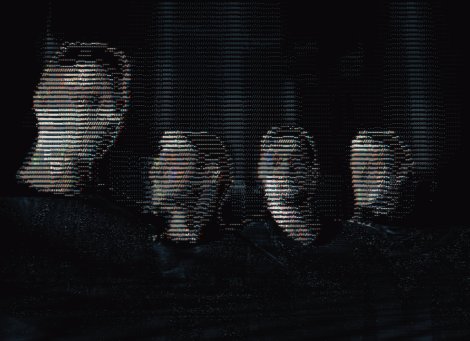 On their last album, there was a story that went along with the music.  That is the case this time, too, only this time there are 10 separate short stories.  Regardless, the music is still rather cinematic, like reaching the apex of a potent moment of storytelling.  You can feel this in the music, and you will feel it all the way down to your very bones.  That is one thing I love so much about this band, as they have authoritative control of their melodies, and there is purpose and emotion poured into each and every one.

It will be difficult to discuss specific songs just because I love them all.  “Exodus” opens the album.  It has a post-rock with violin sort of vibe, and the explosion of melody near the end really delivers.  “Black Swans” is a drum-heavy tune with haunting background violin musings, feeling almost sacred in presentation.  It, of course, peaks in a crescendo that is mighty.  “01101001” is an electronica-tinged rock song that takes its time as it adds layers of melody and atmosphere.  Those are just the first three songs, and they are all already wonderful.

My favorite tracks are yet to come, though.  Those would be “Hello World”, “Obey”, and “Better Stranger”.  “Hello World” has this cyclical Stranger Things/Blade Runner vibe to it.  The violins feel like they are hanging overhead, and the song builds until a huge electronic breakdown punch evolves that is just breathtaking.  This might be one of my favorite songs this year.  “Obey” is almost just as good.  It feels intensely cinematic, with a strong hook that is so nostalgic, like I’ve heard it a million times, but never before at the same time.  It’s that feeling you get when you reach the heroic portion of one of your favorite films, and the band has somehow translated that into music.  Finally, “Better Stranger” actually seems like an ode to New Wave with lots of atmosphere, pealing guitar solos, and zany keys.  I didn’t expect it on this album, though it makes sense.

I think Aesthesys has outdone their previous outings.  “Alignments” has rich composition as a base, and plenty of accents and flair to take it to the next level.  This is music that feels familiar, but somehow forward-thinking and prophetic, too.  I know I’ll be jamming this record for some time yet.