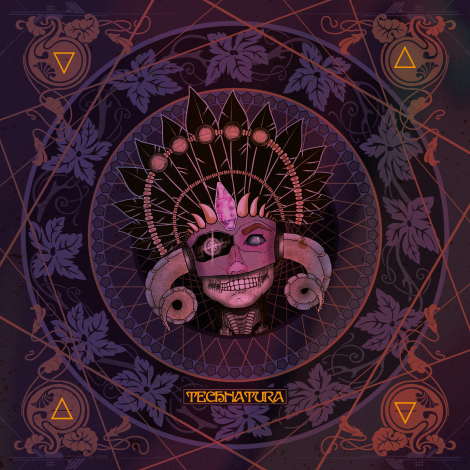 I always love when bands completely exceed my expectations.  Vulkan is a great band, and I enjoyed past releases, such as 2016’s “Observants”, but their new album has absolutely blown away anything they have produced yet.  “Technatura” releases on May 8th, and it should be required listening in 2020 for progressive rock fans.

Vulkan comes to us from Sweden, notorious for producing high quality music.  The band does their fellow Swedes proud with what they offer here.  The band consists of Olle Edberg on keyboards, Johan Norbäck on drums, Jimmy Lindblad on vocals, Oscar Pettersson on bass, and Christian Fredriksson on guitars.

Vulkan rides the line between progressive rock and prog metal in a subgenre that Prog Archives would call “heavy prog”.  The band certainly does hit hard, but never seems to fall into the riffier side of things, and they also present other elements, such as flute, that give them a slightly more pastoral sound at times.  That said, they know their way around a heavy instrumental, and they love to insert small retro accents and wide open climaxes.

Jimmy’s voice is certainly one of the highlights here.  He has a rich tone that can cross into the alternative rock side of things at times, even dabbling in harsh vox on a couple songs.  He also sings in his native Swedish tongue on a few tracks, including (interestingly) the single, “Marans Ritt”.  The rest of the band are like a machine.  Olle’s keys range from sweeping to eerie, Christian’s guitars roar and lumber with great effect, and Johan and Oscar’s rhythm section is wild and vibrant.  From the very first listen, it is difficult to find weaknesses in this band.  If you are more into the technical chops side of progressive rock, you will find plenty to love here.

One thing I have noted, and perhaps I am way off here, is that I hear influence from fellow Swedish band Carptree.  I honestly have no idea if the guys in Vulkan are aware of Carptree or if they possibly share influences with them, but I distinctly hear the eerie, haunting tones that Carptree is so fond of portraying.  From small vocal oddities and unnerving tribal harmonies to vividly strange melodies and textured abstractions, Vulkan has that same eccentric personality in their music.  For my money, that is what really stands out in what they do, and it makes their music feel very much alive.

“Technatura” is a strong album.  It seems to be about humanity’s march into technology at the expense of the natural world, and so the lyrics can come through as dark social commentary.  Four of the songs, at least, are completely in Swedish.  Those four are “Klagans Snara” (Complainer’s Snare), “Rekviem (Requiem)”, “Spökskepp” (Ghost Ship), and “Marans Ritt” (not sure what this means).  All four songs are wonderful.  “Klagans Snara” is actually an abstract instrumental track that feels dark and tribal.  The other three are powerful rock tracks with loads of melody and driving instrumentals.

My favorite tracks on the album are “This Visual Hex”, “Redemption Simulations”, “The Royal Fallacy”, and “The Madness Sees No End”.  “This Visual Hex” is the opener, and it is quite a ride.  With odd harmonies, driving guitars, a flute interlude, and a strange song structure, this track really heightened my expectations for the rest of the record.  “Redemption Simulations” is proceeded by an abstract interlude called “Hunter/Prey”, which perfectly sets the tone.  “Redemption Simulations” has an extra portion of the voluptuous quirk I mentioned.  It is bass-driven, and is also the heaviest song on the album.  Ironically, the song ends quietly and delicately.

“The Royal Fallacy” might be the “epic” on the album.  It is only 10 minutes long, but it feels synthetic, stylish, and perfectly paced.  I love the electronic accents, vast musical space, and haunting vibes.  This might be my favorite on the whole record.  “The Madness Sees No End” finishes the album with oomph and edge.  It is a great alternative track with powerful vocals and small accents that flit and float in the background.  It’s a great song.

Vulkan aren’t as well-known as they deserve, but “Technatura” could change that.  It has the instrumental chops, unconventional personality, and stark lyrics to make a huge impact.  It’s one of those albums that you forget just how good it is until you put it on again.  It’s also one of those albums that you don’t want to end once you’ve hit “play”.  It is layered, hard-hitting gravy in every way possible.

One response to “Vulkan – “Technatura””