The deeper I delve into music worldwide, the more I come to appreciate some of the simpler, more organic compositions out there.  Music is meant to be a reflection of the artist’s heart, and many artists choose to record in genres outside their true passions, only to return to them later in their careers.  Myrkur seems to be doing this herself through her new album “Folkesange”, releasing on March 20th through Relapse Records. It doesn’t sound much like her past works, but the heart of her style can still be found.

Myrkur is a project of Danish musician Amalie Bruun.  When this project first saw the light of day back in 2014, her name was not divulged, but has since been confirmed.  Amalie is a classically trained multi-instrumentalist and vocalist, and so her compositions feel very personal and identity-driven, as if she owns them completely.

Fans will immediately notice a huge difference between “Folkesange” and Myrkur’s previous album, “Mareridt”.  This project, from the beginning, was always about infusing dark folk music into intense black metal atmospheres in new and unnerving ways.  “Mareridt” itself is a terrifying mix of terrifying vocals, blackened auras, and gentle interludes.  It is brilliant.  “Folkesange” chooses to drop the black metal elements in an attempt to focus on the Scandinavian folk stylings, which are something close to Amalie’s heart.  This album features a diverse array of instruments, and the lyrics are almost entirely sung in Scandinavian languages, such as Norwegian and Swedish.  You will hear some English spread thinly across the album, as well. On first listen, this album immediately beckoned my mind to visit the sweeping valleys, towering mountains, and fog-laden tundra of Scandinavia.  I have always wanted to go there, and perhaps someday I will.  The beauty and majesty of that land can be heard within this album as Myrkur offers novel instrumentation, ambient and introspective ether, and haunting vocals.  This album feels otherworldly to my ears, but only because it is a fully-realized expression of hers.  And I love that about it.

Myrkur released three singles in anticipation for the album: “Ella”, “Leaves of Yggdrasil”, and “Gudernes Vilje” (The Will of the Gods).  All three songs are wonderful in their own right, with “Ella” being my favorite.  It is also the album opener, and so grants us an urgency and grandness that takes our minds away to distant places.  I also really like “Leaves of Yggdrasil” for its psychedelic video and sound.  Yggdrasil, I have learned, is the magnificent tree of the cosmos in Nordic mythology; it connects the Nine Worlds, and all of us, together into one universe.  “Gudernes Vilje” is also wonderful with its spacious vocal harmonies and climactic ending.

There are several tracks to highlight.  “Fager som en Ros” (Fairy Like a Rose) is a dance-worthy track with plenty of folkish entrancement and whimsy.  “Tor i Helheim” is a dark song based on an Icelandic poem about a trip through Hel, something I know more about only because of my love for myth and also Hellblade: Senua’s Sacrifice.  Indeed, this track is lingering, sparse, and burdensomely lonely, which is exactly as it should be. 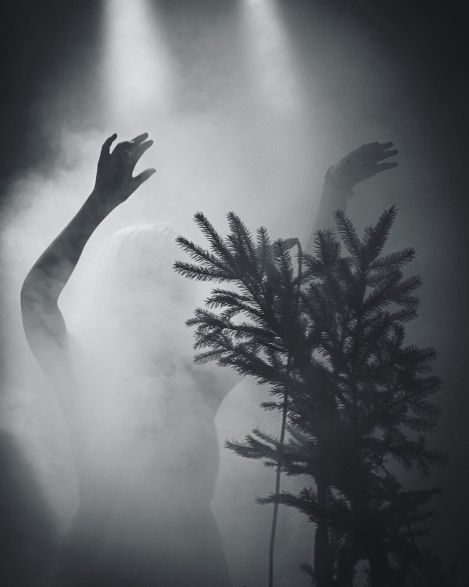 I also really like “Svea” (a Swedish name that has come to embody Sweden as a people).  The grinding, mysterious violins and the almost yodel-like vocal harmonies are at once eerie and familiar.  “House Carpentar” is another good one, being sung in English, and feeling very much like a catchy folk ballad.

I must commend Myrkur on how this album begins and ends.  “Ella” is a glorious opener, one that invites us into a world of lofty beauty and darkened spirits.  It summons me to continue listening.  The album ends with “Vinter” (Winter), a piano-led, cinematic evocation that relishes harmonies and peculiar soundscapes.  You can feel the cold, dark season as it stretches out its hand.  It is an amazing way to end the album, and I think those two songs together are my favorites.

Myrkur channels Amalie’s inner child and her adult nostalgia, and you can hear that painted all over each vivid track, far-reaching harmony, and rich melody.  “Folkesange” is a gracious, quite accessible offering, one that invites us to other worlds, times, and cultures.  It bids us learn and appreciate what she loves so well already, and that beating heart is what makes this album feel so rich and hypnotic.  I think that progressive music fans will be delighted at what they discover here.