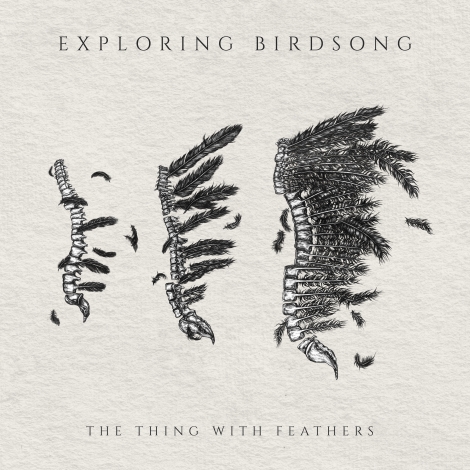 Hope is the thing with feathers

That perches in the soul

And sings the tune without the words

And never stops – at all

I don’t often review EPs.  There has to be a strong reason for me to spend time reviewing what usually only amounts to 20 minutes of music, tops.  This year, for some reason, there have been some amazing EPs, and I did review them, such as from Delain and Vex Red.  Well, here I am again, this time with the phenomenal debut EP from Exploring Birdsong.  “The Thing With Feathers” released on November 29th through Long Branch Records.

Exploring Birdsong comes to us from Liverpool, UK.  From the looks of it, they are pretty darn young, too.  The band includes Lynsey Ward on vocals and keys, Jonny Knight on bass and keys, and Matt Harrison on drums and percussion.

You will probably notice right away that there are no credits for guitar.  Exploring Birdsong is completely driven by piano and keys, so you will not hear any guitar solos, distortion, or licks.  The band could still be considered a progressive rock band, though, since they do have the energy and presence to claim that label.  So, even while crisp piano passages are the centerpiece of their style, you will still hear plenty of bassy grooves and dynamic drums.  Personally, I would consider them more of a post-prog band, utilizing progressive concepts to create something even more meaningful and exciting. 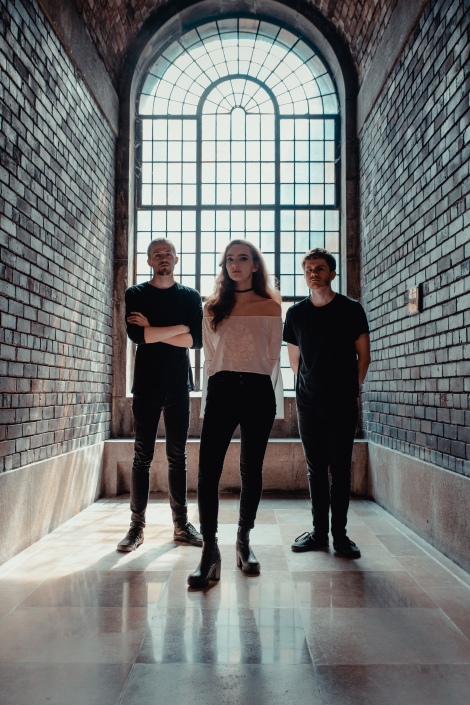 Because of their focus on piano, I’ve noticed that Exploring Birdsong is garnering some comparison with Russia’s Iamthemorning.  I do see the similarity, and I think that if you like Iamthemorning, you will love this band.  However, the atmosphere here is less neoclassical, and also has more rock energy.  The vocals, too, are more about power and emotion than about mystery or melancholy.

Speaking of the vocals, Lynsey is one to watch closely in the future.  Her vocals are, as I said, powerful, and also passionate, as if she sings with some hidden pain.  I think it is fair to say that her voice really carries the entire EP, from the more ambient moments to the towering climaxes.  I suspect that Jonny and Matt are both aware of the enormous talent they are fortunate to have in her.

I wanted to mention the lyrical content, which is rare for an EP.  I noticed right away the poetic and excellent writing on the album, and it seems the band is influenced strongly by Emily Dickinson, who actually wrote a poem called “Hope is the Thing with Feathers”.  The EP itself is based on a poem by Seamus Heaney called “Bye Child”, which itself is based on the real life child abuse case of Kevin Halfpenny, a child who was raised in a chicken coop for seven years.  The themes, as you can see, all run into each other rather organically.  The feeling put into this concept, too, is graceful and deep.  You can hear the pain.  You can feel the scars.  But you can also sense the hope and light that can overcome all of that, to grow wings from brokenness.  It really is a touching experience. 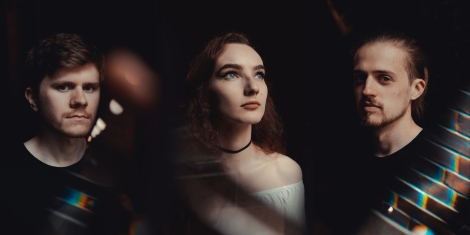 “The Thing with Feathers” is an EP, so it clocks in around 19 minutes in length.  It does have six songs, though.  You will find two of them to be shorter, more atmospheric songs that basically set the mood.  So, the EP starts with “Hope”, a watery and subdued track.  Two songs follow, and then another interlude appears, which happens to be the title track.  This short song is very spacey and features choirs.  These two tracks seem to show that the two halves of the EP should be heard with different mindsets.

“The Baptism” and “The Downpour” (notice how all the songs but one start with “the”) are the second couplet.  “The Baptism” is the longest song on the album at 5 minutes 20 seconds, and it feels like it flirts with carnival-esque sounds somewhat.  It twirls and spins with exacting execution, and ends up feeling almost cinematic when all is said and done.  “The Downpour” is my favorite song on the album.  I believe Lynsey’s vocal performance peaks on this track, absolutely gushing with feeling.  The song builds to a grand climax that should raise the hairs on anyone’s neck, and so the song ends the EP on a really, really high note.  That is probably an understatement, though.

Exploring Birdsong have been getting mentioned in various emails to my inbox for some time, and I’m happy that I finally took the time to hear what they are offering.  This is music made for poetic minds, sensitive hearts, and teary-eyed responses.  This is music made for people who crave melody and feeling, but without forgetting sheer ambition.  I’m excited to see what Exploring Birdsong may create next.