Releasing two albums in a single year can often be a fool’s errand, but I am always impressed when an artist does it successfully.  You will remember In Continuum’s release earlier this year, called “Acceleration Theory, Part 1”, which released on January 1st.  The second and final part of this story, called “Acceleration Theory, Part 2: Annihilation”, released on November 15th, and it may even be the stronger of the two albums.

You may recall that In Continuum is literally a continuation of the sadly defunct Sound of Contact.  With Simon Collins exiting the fold, the time was now to start something new, and to use many of the ideas and melodies that had been created for the lost SoC sophomore album.  Heading up this effort, Dave Kerzer is what I would call the brains behind the outfit.  There are contributions from various artists, however, and even Simon Collins is given credit on co-writing a couple songs.

This is a huge project, just like the first album.  The lineup on Part 2 includes: Dave Kerzner on lead vocals and keys; Leticia Wolf, Gabriel Agudo, Jon Davison, and Michael Sadler on lead vocals; Matt Dorsey on bass and guitar; Randy McStine and John Wesley on guitar;  Fernando Perdomo on guitar, bass, and drums; Nick D’Virgilio and Marco Minnemann on drums; Ruti Celli on cello; and Kaitlin Wolfberg and Joe Deninzon on violin.  You will certainly recognize some names in that list, and I am surprised at how little fanfare this album is getting considering the credentials of the people involved.  In that way, this album feels like a labor of love, more than a commercial effort. 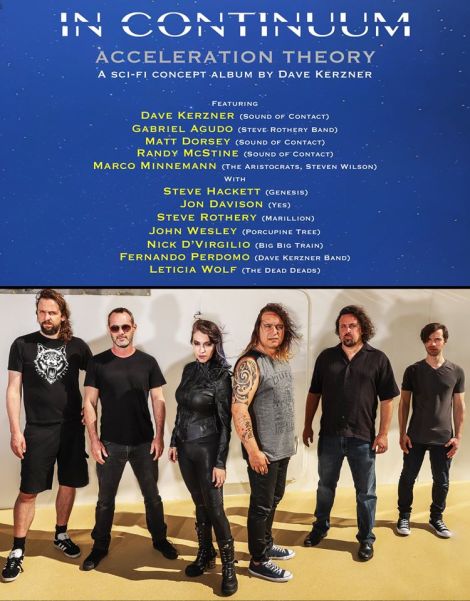 I want to take a moment to discuss the concept behind both of these albums.  It is actually quite complex, but I’m going to try to paraphrase.  Basically, the first album is set in a world that is on the brink of WWIII.  An alien race has been nurturing and helping us evolve since ancient times, but they have run out of patience, so their plan is to wipe out humanity before Earth is destroyed.  Believing in us, a single alien called AlienA crash lands on Earth to warn humanity, but ends up falling in love with a man named Kai.  Before she can really warn humanity as a whole, she is abducted by her own race because they think she has some form of Stockholm Syndrome, rather than real love.

Okay, so all of that happened in the first album.  With “Annihilation”, the question becomes whether or not Kai can save humanity with what he knows.  In this album, WWIII has begun, and Kai is trying to communicate humanity’s imminent demise, but no one will listen.  I don’t want to spoil too much, but suffice it to say that Kai may be just the proof the alien race needed to spare the rest of us.  Kai was still capable of love, and that may be worth saving.  I must say, too, that all of this plays out with vivid detail and even sound effects.  The album as a whole feels cinematic and almost blockbuster.

The quality of the music on Part 2 is pretty much on par with Part 1.  I would say that this album may lean on the 70s just a little more, but still not all that much.  If you know Sound of Contact, you will hear melodies, synth solos, and atmospheres that feel very familiar, even nostalgic.  I especially love Dave’s keyboard textures and sounds, as they feel lush and colorful.  Many times, though, restraint and musical space are the focus, and it is easy to get lost in vastness that the music presents.

As with the first album, I feel like the second half is the stronger portion of the record.  I do love some songs in the first half, such as the lush “Impending Annihilation” or the catchy “You Don’t Know How It Feels”.  I especially like the “AlienA, Part 2” continuation from the first album, as that was my favorite song there, and the returning melody feels as warm as ever.

The second half really brings the inspiration, though.  “Made of Stars” is a grand, atmospheric ballad that feels so good to hear.  “Know That You Are” is fantastic track with plenty of instrumental glory, and even a little edge.  “The War Room” and “All That Is” are shorter tracks with plenty of sound effects and this feeling that they are building to something.

That something happens to be the title track, which is a 20 minute epic that rivals any epic I have heard this year.  Unlike the clichéd epics of so many other bands, this song feels like a cinematic story line, complete with high energy portions (especially with violin) and more dialogue heavy moments.  It is a song that knows how to maintain momentum, while also exploring space, melody, and spectacle.  I am seriously impressed with this effort.  The album ends with “Interstellar Reunion”, which is full of memory and love, and it truly oozes those feelings all over the place.

In Continuum have released two wonderful albums inside one year.  I almost consider them one record, though.  I love the strange familiarity of the melodies and story.  It’s an album that gives you something to cling to, something to embrace.  The story is equal parts fantastical and grounded, giving us fictional ideas to imagine, but also earthly problems to ponder.  These two albums together are a sumptuous, painstakingly human undertaking, and I feel happy and honored to experience them.