I was shocked by something recently.  Even though I have been following Australia’s Voyager since 2011’s “The Meaning of I”, I realized that I have never reviewed one of their albums.  I searched the site, and besides including them in a concert review a few years back, I’ve never featured them.  That both shocked and shamed me.  So, “Colours in the Sun” will be my first Voyager review.  It released on November 1st.

As I mentioned above, Voyager is based in Australia.  Now you know why I’ve been featured Australian bands most of this week on the Facebook page.  The band consists of Danny Estrin on vocals, keytar, and piano, Simone Dow and Scott Kay on guitars, Alex Canion on bass and vocals, and Ashley Doodkorte on drums.  You will also hear Einar Solberg of Leprous provide guest vocals on one track.

The music here is melodic metal, often progressive and always interesting.  The level of personality this band exudes is always a breath of fresh air.  While metal is what they do, the band clearly has mixed 80s New Wave synthpop with this modern progressive metal sound, creating music that is airy, hyper melodic, and incredibly fun to hear.  You will hear dense keytar layering and super strong vocal hooks right alongside powerful polyrhythms and huge riffs.  This is a band that knows musical space and understands how to balance everything to a tee. 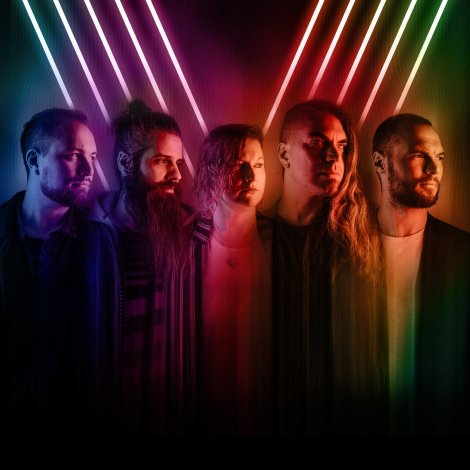 Several years back, bands started trying to sound 70s with their music.  They would try to sound like Genesis, Pink Floyd, Yes, and so on.  Then, a couple years ago, bands became more interested in the sound of the 80s, and so you see all sorts of neon colour schemes, arena production, and new wave emulation.  Fads come and go like that, and I am fine with it.  However, I cannot stress enough that Voyager is no follower.  Their combination of New Wave with metal has been the point of their music for the 15 or so years that they have been active.  I honestly cannot think of a band who predates them in this.

With “Colours in the Sun”, I feel that the band has created their most vibrant, consistent album to date.  Sure, there are songs on other albums that I would still call my favorites, but this album simply features heavy hitter after heavy hitter.  Every single song seems to carry me away into imaginative clouds of majestic melody.  I saw the band live a few years back when they toured with Evergrey and Oceans of Slumber, and they were intense to see on stage in all their glory.  I get those same feelings when listening to this album.

Each member of the band is vital to the overall sound of the album.  I love the rhythm section of Alex and Ashley as they pound and rumble to give us the sheer muscle that is so needed here.  However, one of my favorite things is the contrast between Danny’s vocals and the guitars from Simone and Scott.  Danny is a true personality, performing with gusto and even a bit of flamboyancy.  He is the icon of the band.  Simone and Scott, Simone especially, are the machine behind the scenes crafting intense, outside the box riffs that back Danny up and give the band their signature sound.  They all work together marvelously. 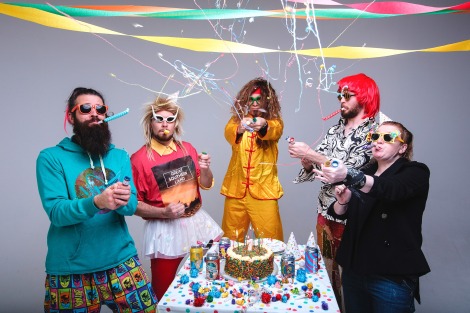 Like I said, every song seems like a major event, so it is difficult to decide which ones to highlight.  The singles are “Colours”, “Brightstar”, and “Entropy”, and all three of them are fantastic.  “Colours” has been in my head for weeks, and I cannot get enough of its huge, climbing chorus.  “Brightstar”, too, has a beautiful central melody and humongous chorus, and the video has kangaroos, so that’s pretty memorable.  “Entropy” with Einar on guest vocals is an interesting song in that the part with Einar takes several listens to appreciate fully.  I have to admit that, as amazing as Einar is, Danny’s matter-of-fact style in the verses is my favorite part of the song.

I want to highlight four more songs.  First, is “Severomance”.  It is slightly more of a slow burn than most of their songs, but when it hits, the massive melodies are really satisfying.  I also really like “Reconnected”, which might be the heaviest song I have heard from the band.  It is unrelenting and maybe a little outside of the band’s normal sound, but also fully immersed in it, too.  It’s hard to describe.

My favorite tracks on the album are actually the last two.  “Water Over The Bridge” is an exhilarating, quite heavy track that really rests on the polyrhythms, but ends up feeling almost cinematic in nature with Danny and, I assume, Alex on backing vocals really harmonizing in some concentrated ways. The ending track, “Runaway”, happens to be my favorite on the album, though.  This song is hyper melodic, spacey, and so very well balanced.  I absolutely adore the keytar solo in the second half where every note seems to be in its perfect place.  That solo, together with the addictive chorus, really ends this album with the exact hype I needed.  Brilliant.

Voyager deserve more attention, even from me.  Their music is consistently fabulous, and this new album is no exception.  “Colours in the Sun” is a gorgeous ride of epic personality, rumbling metallic skill, and maybe even a bit of nostalgic warmth.  Enjoy!