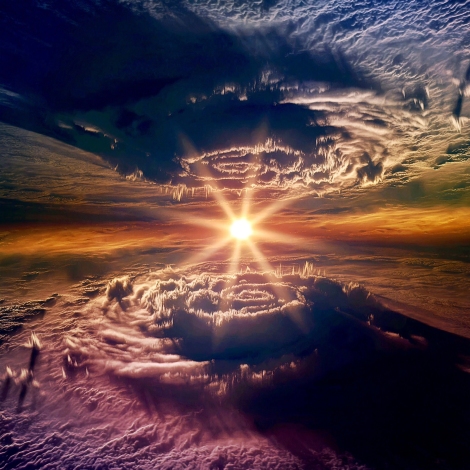 I have a confession to make.  There are some bands that I am completely aware of — that I know and even share sometimes — that I just haven’t taken the plunge on yet.  Klone was one of those bands.  I am familiar with all of their releases in one way or another, but I’ve never actually listened to a full album.  With that in mind, “Le Grand Voyage” is releasing on September 20th through Kscope, and I have decided that putting off listening to this band has been a mistake.  This album is wonderful.

Klone hails from France.  The band consists of Yann Ligner on vocals, Guillaume Bernard and Aldrick Guadagnino on guitars, Morgan Berthet on drums, and Jean Etienne Maillard on bass. These are talented musicians, every single one.

Klone dabbles in various progressive subgenres.  For the most part, they play an atmospheric, somewhat melancholy progressive rock, but you will hear some growling and polyrhythmic metallic portions, too.  That metal sound is always balanced with gorgeous piano or strings, and so their sound comes across as mature and thoughtfully structured.  Prog Archives calls the band post-metal, and I suppose I can hear that, but I would put them more in the realm of Porcupine Tree or Riverside, with a twist of Gojira or Opeth.  I hear some grunge influence in some of their songs, too.

The most important thing to mention is that all of the songs seem to work really well.  Klone is really good at transitions and musical layering.  They never force something that simply is not working.  When strings or hefty riffing fades in, it does so organically and logically.  For that reason, each song on the album has memorable moments that helps demarcate it from the other songs.

While I love the guitar work and rhythm section, I am specifically loving Yann’s vocals.  He has one of those voices where you completely expect him to crack on the high end, but he doesn’t.  He has fantastic control and plenty of character, and he can express emotion on the fly in his phrasing and in mixing of clean with slight growls.  I’m really loving his performance.

There are several highlights on the album.  All of the songs have great instrumentation and choruses, the catchiest being on “Breach” and “Hidden Passenger” for my ears.  “Keystone” is a highly memorable track with an epic orchestral ending that just feels immense, and you will hear some similar moments on other songs, too.

My favorites are “Yonder”, “The Great Oblivion”, and “Silver Gates”.  The album opens with “Yonder”, which is one of the singles, and I can’t get enough of it.  The studio version is wonderful, especially with the epic strings that filter in near the end.  The live video they released, however, seems to have more grit and gravity to it, and so I actually prefer it.  “The Great Oblivion” is one of those songs that takes some time to grow.  I actually didn’t really like it the first time I heard it.  It is bit heavier than the other songs with more standardized riffing going on from the very start, and I honestly hear some grunge influence from Alice in Chains or Soundgarden here.  However, after a few listens, I’ve really come to love the feelings of obscurity and distance that are effectively communicated through the music.  “Silver Gate” ends the album with style and feelings of passing into stunning skies of hope.  I really love the chorus, but it is the instrumental in the second half, especially the guitar lick, that really makes this song special.

So, my first Klone album has turned out to be really good.  They fall right in line with my tastes, and they know how to throw in some twists to keep things interesting.  “Le Grand Voyage” truly does feel like a journey of majestic proportions, and I’m glad I elected to join them.