This month’s Triple Feature offers three albums that are completely different.  One is softer rock, one has more edge, and one is barely rock at all.  They are all fine albums, though, but I don’t have much to say about them.

Christopher Esse hails from California.  He is actually the owner of Musicesse Publishing, as well.  I admire his guts in releasing his new album, entitled “Resonance, Part 1: John Doe Saves the World” and releasing on July 19th, as all the profits are going to charity.  He also hopes to adapt it for theatrical performance, as well.  And, yes, this album does actually exist.  You will be hard-pressed to find much info on it online.  I did just get the album cover to update this post, so that’s good.  The lineup includes Brian MacLeod on drums, Davey Faragher on bass, Steve Zukowsky on guitars, Jeben Bruni on piano and organ, and Christopher Esse on vocals and synth.

This album offers a gentler, mildly eclectic rock that muses around the corners of progressive rock to some extent.  The vocals are straightforward, though I get some B-52’s vibes sometimes, and the lyrics are “clever” to the point of being a bit cheesy sometimes.  There are some wonderful guitar solos strewn throughout the album, and you will hear some beautiful orchestrations and horns that help climax the songs in proper fashion.

Speaking of songs, most of them plod along without much purpose or real inspiration.  I’m reminded of Tom Waits in some ways because of the direct social commentary and “old curmudgeon” vibe, but the personality just isn’t there to make it work.  Many of the songs start out roughly, such as “Thistime”, but launch into emotional solos and wonderful instrumentation near the end.  Those things are the strong points here, and so the album is worth a listen.

Overall, the music sounds like it was made for the 70s, but not the mellotron/prog rock kinds of 70s.  It sounds more like the vanilla soft rock commercials I used to watch when I was young.  That’s not a bad thing, but it’s really not all that interesting, either.  I think the music would be much more interesting to see live on stage as a story unfolds.  I hope Christopher’s plan for this becomes a reality.

Hear the single “I’ll Save the World” here

Frédéric L’Épée is apparently a big deal.  His Bandcamp page says that he is “best known for founding the progressive rock band Shylock in 1974 (gathered again since 2012), the guitar band Philharmonie in 1988, the instrumental quartet Yang in 2002, and the acoustic rock band Lobotonics in 2008.”  So, he’s been around the block.  He hails from Germany, though he is French, if you couldn’t tell.  His album “The Empty Room” released back in May (though it seems he’s released another since then already), and it includes André Fisichella and Volodia Brice on drums , Nico Gomez on bass, Laurent James and Frédéric himself on guitars, and Olivier Innocenti on bayan.

Frédéric makes music that is described in many places as progressive rock, but I don’t really see it that way.  His music is far too ambient and abstract to fall under that general label.  In fact, I would call his work “post prog”, as it uses progressive rock components to create far different soundscapes.  So, the music here is gentle, atmospheric, and abstract.  It is pretty well brilliant, if you ask me, almost like a textured and surreal painting for your ears.  It feels subjective, layered, eerie, personal, and hovering.

Some songs, like “Inévitable Traverse” and “Delta”, have more of a central melody and feel more direct.  Other songs, like “Descending the Slow River” and “Treasured Wounds”, are far more textured and outside the box.  While you will hear songs that feel like true songs, you will also hear tracks that are purely for reaching other senses besides your hearing.

Overall, I really enjoyed this album.  Frédéric seems like a genius in reaching all our senses in creative ways.  This isn’t music you’ll want to hear all that often, but it is an experience when you do. 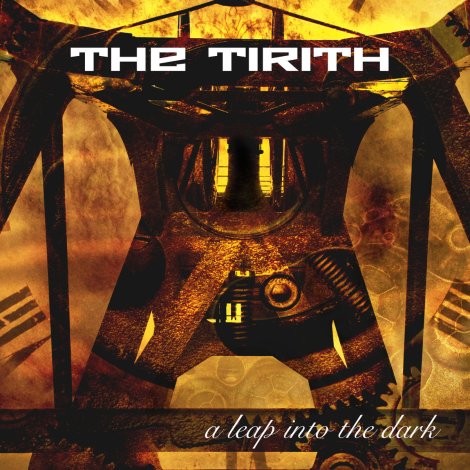 The Tirith is an interesting band.  They hail from London, and they have been around since the 70s.  Their new album “A Leap Into The Dark” released back in May, and has a fresher sound than you might expect.  The lineup includes Tim Cox on guitars and keyboards, Dick Cory on bass, vocals, acoustic guitar and keyboards, Carl Nightingale on drums, and guest Paolo Iannattone on keys.

The music here borders on prog metal at times, just in sheer weight.  I would mentally place it more in the “heavy prog” subgenre.  The music is hefty and has a hardened edge to it, and guitars are king, as evidenced by the classic-style riffs and the pleasing solos.  It really feels like a newer version of some older 70s bands, like Deep Purple, King Crimson, or Styx, which makes sense since they started making music in that decade themselves.  They don’t necessarily sound like the prog rock of Yes or Genesis: They are darker and sharped than that.

The music overall is pretty basic, though.  The guitars are wonderful, but nothing all that interesting happens outside of that medium.  I’m personally not a huge fan of the bands I mentioned above, so I can definitely say this sound isn’t made for me.  If you are a fan of those bands, you may find this to be one of your favorites for the next couple months.