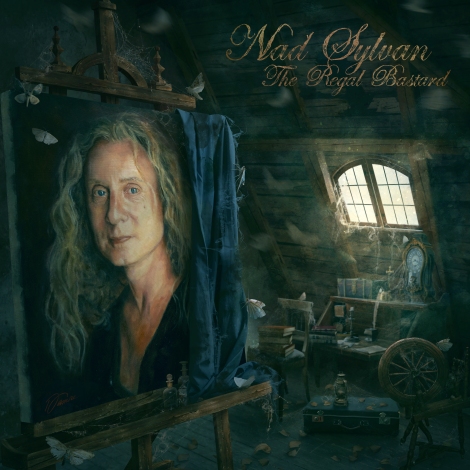 I really enjoy trilogies.  In the film world, there is just something satisfying about three movies that allow us to grow close to the characters, to invest ourselves in the story arch, and to anticipate the grand ending.  This is the same for music, though.  Nad Sylvan has quietly released one of the best musical trilogies I have personally heard over the last few years, and the ending has finally arrived.  “The Regal Bastard” releases on July 5th through Inside Out Music, and it is a magnificent finale to what has been a trilogy of wonderful albums.

Nad hails from Sweden, but he travels the world constantly with Steve Hackett’s Genesis Revisited tour as the lead singer.  On this album, he handles vocals, guitars, keyboards, and piano, while also writing, producing, and mixing the album.  Coming with him is an array of recognizable names, such as Steve Hackett and Guthrie Govan on guitar; Anders Wollbeck on keys and programming; Tony Levin and Jonas Reingold on bass; and Nick D’Virgilio on drums.  You will also hear Sheona Urquhart, Jade Ell, Tania Doko, and Nick Beggs on vocals and choir.

Nad expresses himself through progressive rock that has plenty of flourish and elegance, and that list of guests really shows that.  His pure style is probably my favorite thing about him.  Touring with Hackett, you will obviously hear a bit of Steve and Genesis in Nad’s sound, but I feel like that is decreasing with each album.  The poetry, extravagance, sea-faring melodies, and Victorian sensibilities are all Nad’s personality, and they set his sound apart, as do his obvious influences from 80s pop gurus.

“The Regal Bastard” might be the most complex of the three records in this trilogy.  I will say this: It was definitely the most difficult of the three for me to grasp and love immediately, but the payoff has been huge for returning time and again to it.  This record displays more subtlety and nuance, less flair and extravagance, though all of that is still present.  This album manages to be the deepest yet, but also one of the catchiest as far as choruses go.  That is a difficult balance to achieve.  In fact, I think Nad’s normal elegance primarily comes through in his soulfulness this time.  There is a fluid humanity through it all, though, that really works and really draws us in for the last dance, so to speak.

Now, the album has seven tracks officially. It ends with “Honey, I’m Home”, which Nad has pointed out as coming full circle from the beginning track of the trilogy, which was “Carry Me Home”.  The album very much feels like coming home and ending some sort of adventure or journey.  There are two bonus tracks, though, called “Diva Time” and “The Lake Isle of Innisfree”, as well.

Each and every song here has something to offer.  My favorites tend to be the funkier ones, though.  Some of the songs are pure emotion and breezy melody, such as the expressive opener “I Am the Sea”.  Other tracks contain a hefty sea-faring vibe, such as the graceful “Oahu”.  Other tracks are more progressive, such as the 12 minute title track that contains plenty of transitions.  I especially love the atmospheric portion in the middle of that song.

My favorites, though, are simply groovy.  “Whoa (Always Been Without You)” is one of my favorites.  The groove is undeniably infectious, the melodies (especially in the second half) are warm, and the chorus is golden.  I always love to hear Nad’s guitar soloing, too, as he’s better than he thinks.  “Meet Your Maker” is an absolute joy to hear.  It feels very 70s and funky, and the groove is, oh, so addictive.  It almost feels like early R&B meeting 70s prog rock.  “Honey, I’m Home” is a great ending for this trilogy.  Hackett plays a solo on this song, and the water effect used alongside Hackett’s instantly recognizable finger work is just stunning.

The bonus tracks are both lush and demogorgon, too.  “Diva Time” is elegant and catchy, with loads of melody and personality.  “The Lake Isle of Innisfree” feels like a prologue, just a final little taste of the story.  It is low key and almost ambient in the way it transitions to a beautiful keyboard atmosphere.  I really enjoy that.

Overall, Nad’s Vampire Trilogy has been a complete success.  The music has been consistently gorgeous, warm, and stylish; and I don’t think I could ask for much more than that.  I do think “The Bride Said No” will remain my favorite of the three because I absolutely adore that album, but “The Regal Bastard” is nipping at its heels, so to speak.  Nad just has a way of writing that feels sophisticated, yet sensible and accessible.  I’m really excited to see where he goes next.