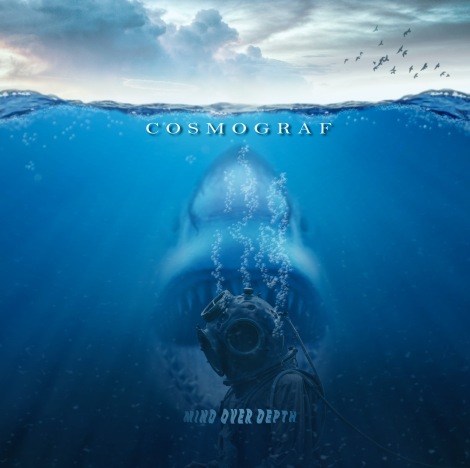 It seems like forever ago that I started listening to Cosmograf, but it was only back in 2013 with “The Man Left in Space”.  Robin Armstrong, the brains behind this project, has been evolving and growing since that time, and so his releases are always an event for me.  His new album, “Mind Over Depth”, releases on the 12th of April, and it is without a doubt his best album yet.

As I said, Robin is the brains here.  He handles vocals, guitars, keys, and bass; not to mention creating the cover art, production, and all the writing.  This time around, he has a couple of guests: none other than Colin Edwin on bass and Kyle Fenton on drums and backing vocals.

Cosmograf has always offered a form of progressive rock with some edge to it.  However, I would probably label this album as the heaviest yet.  The guitars are meaty and distorted perfectly, and there is a drive to the licks that isn’t found that often in his other albums.  Yet, Robin has also been dabbling with electronic music lately, and this album is full of it.  I’m not sure how long he’s been messing around with it, but the electronica on this album is simply awesome.  So, you will hear huge riffs combined with immersive electronic trappings that will keep you on edge.  It is a great combination that really works for me personally.

Robin never disappoints when it comes to lyrics.  He writes with a depth and weight that simply escapes many others.  “Mind Over Depth” seems to be about the human search for love, the battles and obstacles that ensue, and those dreaded feelings of being alone and misled.  There might be more of a story to it than that, but those are the themes I hear.  The concept is all about the human experience, and loss is part of that.  As the album fades out with “This love isn’t real”, you can feel that puncture in your heart for those people who are ever searching, and never quite finding, the love of their lives.  We all know that feeling in some degree.

The album only has five songs, but clocks in at about 45 minutes in length, which is a sweet spot, in my opinion.  With only five tracks, I have time to mention them all.  The opener is “A Million Choices”, and it is a strong one.  The aforementioned electronic overlay mixed with the memorable riff is a great introduction, and Robin’s voice sounds fantastic.  “Godspeed” comes next and is an awesome track with an addictive central lick and super catchy chorus.  I love the dark 90s sound to the guitars near the end.

Now, “The Smoke and the Flame” is the single, but I’ll go out on a limb and say it is the weakest on this album.  Being the weakest song on a masterpiece, though, means it is still a great song, especially with that huge chorus.  I was thinking, though, that this is the exact same song I would have chosen as the single, so I cannot fault Robin for his choice.  “Sharks” follows and is an addictive song with haunting harmonies, screaming guitars, and lots of edge.  I have to say, this one grows on me more and more every time I hear it.  It almost feels dangerous in some way.

The album ends with a bang.  “Goodbye to All Illusions” is the best song that Robin has ever written.  There, I said it.  I have no qualms about making that claim.  It is mysterious, electronic, poetic, riff-heavy, and spacey; and I would put an emphasis on “electronic” since it makes up a large portion of the song.  It feels like human longing, but also feels like the sudden dashing of a façade that has ruled your life for far too long.  It is a brilliant piece of music that will easily be one of the best songs this year, for sure.

Robin is 100% on his game with “Mind Over Depth”.  It is deep and immersive, while also having plenty of that rich and slightly sci-fi Cosmograf atmosphere that I love so much.  On top of that, this album just rocks with giant riffs and complex, driving rhythms.  Before this, I held “The Unreasonable Silence” as his best work, but this album has bested it firmly.