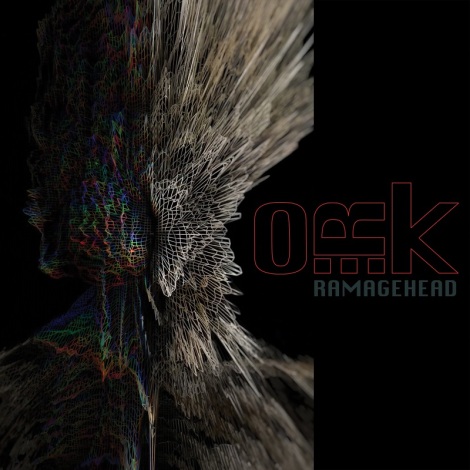 Some bands thrive on producing something unique. Other bands try to hit the golden target of nostalgia.  Some bands do both.  O.R.k. is such a band, and I have to admit that I wasn’t quite sure what to think at first, but I’ve come to the opinion that “Ramagehead” is a rock solid album.  It released on the 22nd of February through Kscope, of all labels.

O.R.k. stands for something, but even the band doesn’t quite seem to know.  I’m assuming they just like the resemblance to the vicious orcs that we all know from Tolkien’s works.  I have no idea, though.  The band contains quite a line-up: Lorenzo Esposito Fornasari (Lef) on vocals and keys, Carmelo Pipitone on guitars, Colin Edwin on bass, and Pat Mastelotto on drums.  The band officially hails from London.

The musical style here is quite varied, but in subtle fashion.  It definitely has a base of alternative rock, which I would say leans towards grunge quite a bit.  It has this primal, raw feeling to it, though, that will make you grit your teeth and sing along with the emotional lyrics.  On top of that, you will hear plenty of ambient and electronic additions that further form the pointed atmosphere that the band wants to create.  I’m honestly surprised to see Kscope releasing something with so much edge, but I’ll just chalk that up to progress for the label.

I have to talk about the vocals for a second.  Lef reminds me so much of Chris Cornell at points, but not at all times, as he does have an accent.  He, however, has Chris’ ability to engulf our ears with huge, soulful notes, and so the connection to grunge is not just in the guitars and raw atmosphere, but in the delivery of the lyrics, too.  His performance on this record will definitely be one of the best vocal performances of 2019.

I have a feeling that this album will grow on me more and more as the year progresses.  Most of the songs here are memorable for one reason or another, and it’s one of those albums that you forget how much you love until you find yourself playing it again.  Songs like “Signals Erased”, “Down the Road”, and “Strangled Words” all rely heavily on Lef’s amazing voice and his ability to emote as well as perform.  The choruses on those tracks are all wonderful.

Other tracks have even more to offer.  “Kneel to Nothing” is a fantastically angsty opener.  It reminds me so much of something Alice in Chains would have written.  The chorus specifically will get your blood flowing.  “Beyond Sight” is a slow-burning track until Lef unleashes his inner Cornell with an impressive vocal display.  “Black Blooms” further connects O.R.k. to the alternative world by featuring Serj Tankian of System of a Down.  It’s a wonderful song, especially when listened to as part of the full album.  Finally, the album ends on a high note with “Some Other Rainbow, Part 2”.  It features strings and saxophone, and is mostly instrumental.  Despite this, the song is still emotional, and is a very strong album closer.

Most of you probably know that I love the alternative/grunge scene, especially from the 90s and early 00s.  O.R.k.’s new album is scratching that itch with all the dark emotions and groovy soul that they could muster.  “Ramagehead” manages to draw me in on a personal level, but also impresses from a performance perspective, as well.  I know I’ll be listening to this for quite some time.