Have you ever come across a band that is perfectly named?  There are some that come to mind, but few are as appropriately dubbed as Electric Mud.  I discovered this band’s music when I awoke at 4 am to the sound of my phone going crazy because someone was sharing files to my Dropbox account.  Not the best of impressions to start, I must admit, but “The Deconstruction of Light” is just so good that I’ve let that go.  The album released back in April, and I really think that this will satisfy some instrumental prog cravings out there.

Electric Mud hails from Germany.  The project is primarily through Hagen Bretschneider on bass, design and composition; but is realized through Nico Walser on all additional instruments, plus Lennart Hyper on rhythm guitar.  That may sound a bit strange, but the band really brings it all together well.

The musical style is honestly and deliciously difficult to describe.  It’s literally electric mud.  One part of me wants to call it progressive electronic, as there is plenty of that going on here.  On the other hand, there is plenty of prog rock, too, and it has some sharp edges and distortion to it.  Regardless of where I put it in my mind, the album has loads of roaring guitars, emotional soloing, electronic and synth, and atmospheric layering.  The genres of each song are pretty different, too, so there really isn’t any way to put this band in a neat box somewhere.  They really do sound unlike anything else out there.  That said, I think you will hear some snippets influenced by bands like Led Zeppelin, Black Sabbath, Pink Floyd, Tangerine Dream, Lunatic Soul, and more. 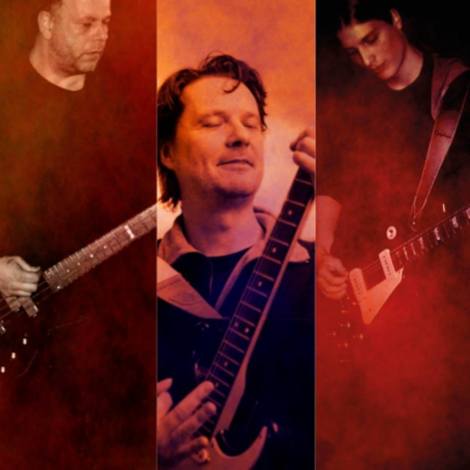 “The Deconstruction of Light” can be a challenging album.  Some of the songs don’t make complete sense the first time you hear them, but the second or third time you really get what the band is trying to do.  Some songs might not appeal to my typical listening, such as the country rock inspired “Suburban Wasteland Blues” (though it does have some amazing moments), but some songs immediately hit my brain just right.  Some songs feel inspired by classic rock, like “Black Dog”, while others are more cinematic, like “Through the Gates”.  None of the songs stay in one genre or concept for long, moving from rock to ambient, from edgy to contemplative.  Ultimately, the band moves between ideas organically, as if it were the most natural thing in the world.  Their transitions are seamless, their ideas are cinematic, and their music evokes emotions that you will recognize instantly.

There are four tracks that I want to discuss.  First, “Deadend Mind” is one of my favorites.  This track moves from bassy rock grooves to pure electronic bliss to thoughtful ambient musings, all while evoking feelings of hollowness and shadows.  The last half feels dark like Lunatic Soul, but with a melody that floats along like something from Pink Floyd.  Following that track, “Canary in a Cathouse” feels on edge, almost mysterious.  Yes, you will hear purring cats, and that sort of warmth exists, but most of the song feels anxious and subtle and spacey.

“Heads in Beds” competes with “Deadend Mind” to be my favorite on this album.  It’s definitely more Floydian in sound overall at first, and has plenty of gravy piano moments.  It transitions to this absolutely stunning keyboard ambience and pure electronic wave that take me to another place every time I hear them, and ends with delicate piano melodies and just this utter sense of peace.  The final track that I want to mention is “Moongarden”, which ends the album subtlety and wonderfully.  It feels a bit like the cover art for the album, shrouded and mysterious.  It’s a beautiful way to end such an eclectic album.

Electric Mud needs to be on your radar.  “The Deconstruction of Light” is an evocative experience that will take you to many different points on the musical spectrum.  You will find yourself feeling the music, drowning in the sea of emotions that the musicians paint for us.  Go buy a copy!