I’m going to try to describe a strange album today.  I get all kinds of weird offerings from bands all over the world, but I rarely get weird albums from bands that I already know and like.  Polish band Wave surprised me with their debut last year, offering depth of emotion and sound that I didn’t expect for a new band.  Their sophomore album released in January of this year (without my knowledge), and is something of a departure from their debut, although you could also say that it is a natural progression of their sound, too.  “Between” is the name of the album, so let me try to muse a bit over how I feel about it.

The band hails from Poland, and I’m sure you know how much I love Polish prog, affectionately dubbed “Progski”.  Wave is somewhat different among those bands, however.  The members include Grzesiek Opałko on guitars and vocals, Marcin Wrona on guitars and vocals, Artur Ramiączek on drums, Wojtek Lisowicz on keys and vocals, and Krzysiek Tomczyk on bass. These guys really know how to play, and I’ve discovered that the eerie nature of their first album has become something even more spacious on this new album.

The compositional style focuses on abstraction and texture, making the overall feeling and effect of the music more important than the melody or the catchiness.  What I mean is that each track feels like something specific but also somewhat blurry, portraying abstract concepts or circumstances that feel a certain way in your gut, even when they may physically look or sound differently.  In other words, the songs play around with the way our human minds place connotations and implications on other things, like the rottenness of rats or the pleasant aura of midsummer.

This all means that the music is designed for effect.  The overall style is that of typical Polish prog; full of melancholy, dark atmospheres, and damp emotions.  You’ll hear plenty of high strung guitar work and deep bass grooves, and so fans of Riverside, Votum, Amarok, Xanadu, and other Polish bands will find something to love here.  However, an open mind will be necessary and this music is not as straightforward, instead playing with the corners of your mind and conveying adjectives rather than nouns, if that makes sense. 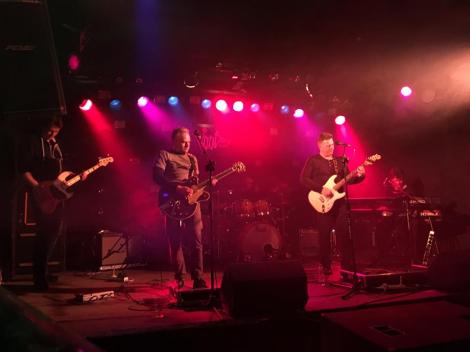 So, I’ve tried to describe the music on this album and the way it makes me feel.  My takeaway from the album is twofold.  First, I’m seriously impressed by the maturity and obvious compositional skills that these guys have.  It takes skill to craft music that effects the listener in almost indescribable ways, and it takes even more skill to craft music that does that while also offering tasty grooves and melodies.  Second, however, I also feel like this album cannot possibly become popular, even in the progressive community.  Yes, that is a shame, as it takes seriously big balls to make an album that will confuse even progheads.  The album is focused so much on vibe and texture, though, that it becomes a somber challenge to undertake: a journey that requires mental effort.  Instead of just headbanging to some riffs, you will need to allow the music to paint pictures in your mind.

I’ll be honest: The first half of the album is fairly difficult to absorb initially.  “Illusion” starts out with Middle Eastern vibes and the whole song feels like a mirage.  “Rat” feels vulgar and foul in visceral and musical fashion.  “Lost” feels forlorn and wandering and deserted.  “Trash” starts out feeling oversaturated with some punk vibes, but transitions into a beautiful piece near the end.

Starting with “Midsummer”, the album starts painting even clearer pictures.  “Midsummer” itself has this colorful aura to it that feels like the sun setting in summer.  “Another Day” and “Aftertaste” feel like they go together, and they are the most “straightforward” prog songs on the album, feeling like something that could come from any of their Polish counterparts.  These songs are melodic and eerie with great guitars.  The last couple songs follow suit to some extent, and are just as rocking but melancholy as you might expect, with the title track being especially good with violin accents.  I would say the feel significantly more claustrophobic, however.

Wave’s sophomore album, then, is a unique experience.  The music is always beautifully performed and skillfully composed, but it may surprise you with its sound and what it does to your head.  “Between” is an otherworldly journey through various ideas and mental suggestions, and it certainly stands out from the pack this year in the way it plays out in your mind.