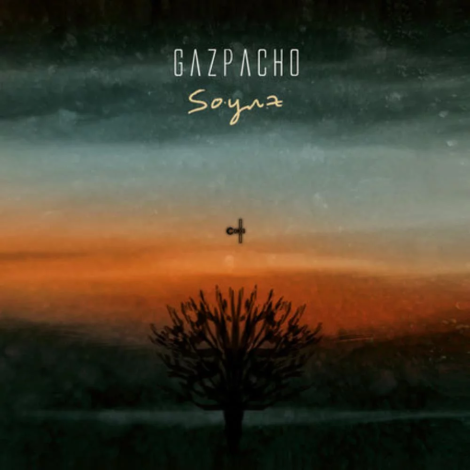 For some reason, the new album from Gazpacho has been a difficult review for me to write. “Soyuz” (meaning “union”, and also referring to a doomed Russian spacecraft) is one slow burner of an album, but when you grasp it mentally, it really shines.  The new album releases on May 18th through Kscope.

“Soyuz” is somewhat difficult to review because the album actually has both familiar and new sounds for this band. The first half of the album sounds like something typical of their past works (not a bad thing); with the expected melancholy, slow paced atmospheres, historical and cultural references, and unexpected twists and accents.  This is not the band to play when you want to rock out, certainly.

The second half of the album, though, feels somewhat different. It feels brighter and less dreary, like Jan is singing with his hands held to the skies as Mikael’s violin is used in a more orchestral fashion than normal.  The lyrics deal with the idea that human moments are lost in time helplessly, and so the album muses over human moments that seem more frozen in time, like the doomed Russian spacecraft, Buddhist monk funeral rituals, or classic stories.  This makes everything feel even more philosophical and even celebratory at times, like a look at the human condition under the blazing sun of our solar system.  As you can tell, the sound is nuanced and difficult to explain, so I hope my descriptions helped a bit.

Like I said, the album flows from familiar Gazpacho to something of a new sound. Some songs are soaring and almost ancestral in tone; while others are gritty, textured, and sorrowful.  There is something fuller and richer about this album as compared to past offerings.  The musical quality is on par with their last two albums, but the production and depth here feel somehow bigger, elevated, and more detailed.

All of this is performed mightily.  Jan sounds great, as usual, and his tone often matches Matt Bellamy of Muse in some of the more upbeat moments (I hope he doesn’t mind me saying that).  Jon-Arne’s guitars are dark and more post-prog in tone, while Thomas’ keys and programming are what really make this album feel whole.  I’m a huge fan of Robert’s drums and Kristian’s bass on every single album, too, as they always manage to create twisting, interesting beats and bass lines.  They sound like no others that I know.  Meanwhile, Mikael’s strings are adding accents and wonderful melodies to create an amazing final layer.

In full disclosure, all my favorite songs are on the last half of the album. The first half is great, too, though.  “Hypomania” is probably the best one, being more upbeat for a Gazpacho song, and I love the vocal melody and programming.  I also love the dark nuances of “Exit Suite”, a classic Gazpacho track.

“Sky Burial” starts the flow into a different sound. This song is ethereal and mounting, almost like a crack of thunder in the endless sky.  “Fleeting Things” follows and is like an ode to the passing nature of human constructs, and I absolutely love the chorus.  “Soyuz Out” and “Rappaccini” end the album with philosophical musings (I assume Rappaccini’s poisonous daughter from Nathaniel Hawthorne’s story is the reference here) and almost a bit of hope.  Almost.

Gazpacho has yet another winner with “Soyuz”. The band still isn’t for listeners who want metal or kinetic technicality, but for those of us who appreciate textured musings, deep lyrics, and unusual twists; this album is perfection.  Go buy a copy.

One response to “Gazpacho – “Soyuz””