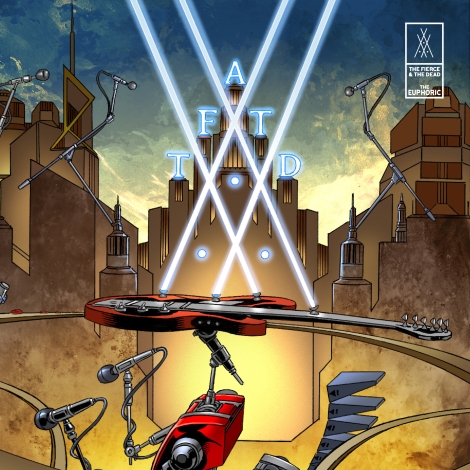 I’ve been following TFATD for several years now. Every time I think they have found a niche that they will simply tread, the band goes and finds a new sound or focus.  They have done it again on their upcoming album “The Euphoric”, which releases through Bad Elephant Music on May 18th.

The band hails from the UK and consists of Matt Stevens on guitar, synth, and piano; Kev Feazey on bass, programming, synth, and percussion; Steve Cleaton on guitar and piano; and Stuart Marshall on drums and percussion. One thing I can definitely say about these musicians is that they are all absolutely fantastic at what they do.  TFATD always features fantastic guitar licks and loops, over the top bass, and hefty drumming.  Lately, keys and synth have really come into play, too, adding another dimension to the band’s overall sound.

I’ve always thought of TFATD as being one step away from math rock. Their music has always used sharply contrasting odd time signatures, blaring bass, and technical drumming, but always with a side of humor.  Over the last couple albums, the band has toned the technicality down a little bit to focus more on atmosphere and more gradual progression.  In fact, I would say the band has become more abstract and restrained overall.  They often go to a style that contrasts a solid bass groove up against delicate guitars, but they transition well from idea to idea.

On “The Euphoric”, the musical style is again playful, but also warmly nostalgic. It recalls the sounds of the 80s and 90s without actually sounding like those decades outside of the great use of synth.  Much of the music is driving and kinetic, while other parts are more about musing and ambience.

As I said, many of the songs are very nostalgic. For example, “Truck” is a fantastic opener with a driving central lick and a very smooth finish.  “1991” is another track that recalls the glory years, and it sounds similar to “Truck”.

The album does not completely focus on that single vibe, however, and does attempt some new things. The title track itself is quite ambient and delicate, lacking much of the bassy punch of the rest of the album.  I love it.  “Dug Town” has a great center melody that plays up against a soulful guitar lick.  “Capet Opal” is a short song that sounds fantastic with a subtle keyboard melody.

My favorite tracks comes near the end, though. “Verbose” is probably my favorite on the album.  It has everything: the kinetic side, the ambient and synthy background, and the nostalgia.  The end of the album is also fantastic.  “Part 7” has a great groove to it that transitions into “Part 8”.  Although they are two tracks (at least in my promo), they are one song that is played delicately, with great attention to detail and with fantastic progression.  As a side note, “Parts 7-8” are new tracks in a suite that has been ongoing since their very first release back in 2010.  I would love to see the band put all those tracks together into one release so that we can experience the flow clearly.

After their “Magnet” EP in 2015, my interest in TFATD jumped a few notches. Since then, they have only gotten more mature, more progressive, and more interesting to me.  “The Euphoric” leaves the heart and humor of the band intact, but you will also find more experimentation with loud and soft tones, too.  The band should certainly be proud of this release.

Find The Fierce & the Dead online: