There are bands whose names you hold onto like classic paperbacks.  “Oh, yeah, I know Chaucer.  Canterbury Tales.  Dickens?  Yeah, I’m familiar with Great Expectations.”  But of course, by “know” and “familiar,” we’re more talking about a passing brainwave than a real intimacy.  My relationship with Kayak was a little like that until this year: I’d known of the Dutch band with ties to seventies prog and a symphonic style of writing, but not well enough to name a tune or give an educated opinion.  When the promo for Seventeen came across my radar, I decided it was time to do some more research, and thankfully my local record store had a few LPs on vinyl for me to pick up and do some more extensive listening.

An extended hiatus from 1982 to 1999 inflates Kayak’s four-decade lifespan, but the band has truly been an underrated gem in the prog scene.  They returned to action in 2017 for some live performances, and are following up on those appearances with a brand new album, the seventeenth studio release under the Kayak name.  Frequently compared to the likes of Camel, the Dutch act has always employed a standard instrumentation of keyboards, guitars, and percussion, and now create a sound that manages to highlight their classic heritage while also pressing into modern elements of composition and recording.

In order to reach the 40-year threshold, a band will likely pass through a number of incarnations, and Kayak certainly has flirted with varying styles and personalities throughout its career, especially as singers and musicians have rotated in and around keyboardist Ton Scherpenzeel, the only original member of the band remaining in the act.  Joining Ton for Seventeen is a brand new lineup, initially announced as the touring crew for the band’s summer shows last year, and officially inaugurated with the new album: Bart Schwertmann (vocals), Marcel Singor (guitars, vocals), Kristoffer Gildenlöw (bass), and Collin Leijenaar (drums).  Andy Latimer of Camel also makes a guest appearance on lead guitar, an inclusion largely due to Ton’s own work with Camel during Kayak’s extended hiatus.  Some of the cross-pollination between the two bands undeniably owes itself to that collaboration. 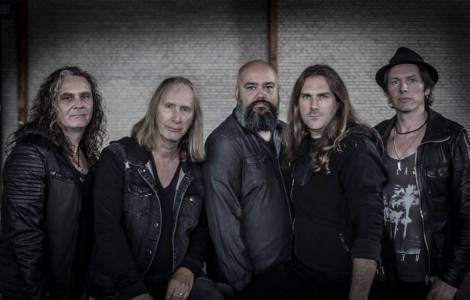 Released January 12th, Seventeen is at once a radically different album than anything the band previously released, while simultaneously invoking Kayak’s selfsame 60‘s-and-70‘s-style of composition: symphonic in scale, and boasting both grandiosity and an energy that belie the band’s longevity.  That’s perhaps what strikes me the most about this album: it’s bold and boasts some serious liveliness – notable strengths for a name that has been in the business for four decades.  In fact, Seventeen could almost be considered a debut: the new sound and an almost entirely new lineup render this version of Kayak more a reincarnation than merely a revival.

While neither a concept album nor one written in the style of a rock opera (as were previous Kayak releases), Seventeen still feels cohesive and utilizes the musicians’ strengths and styles.  The songs average a shorter length than is common for most progressive rock, and are interspersed with some longer tracks that reach for more varied and lofty arrangements.  Total runtime just reaches 60 minutes, without the inclusion of the special edition’s second disk, which features an additional 36 minutes of demo recordings from 2016.

Eager to begin the musical journey, “Somebody” begins the album without preamble.  In fact, if you’re listening via iTunes or Spotify, you’ll want to make sure that the “crossfade” settings are turned off or you’ll find yourself wondering if you’ve got a truncated mp3 for a first track.  This piece of writing nods to classics by Supertramp while also exemplifying the more aggressive metal influences that characterize the playing and singing of Gildenlöw, Singor, and Schwertmann.  The 12-minute monster that follows, “La Peregrina,” is an epic tune that soars with layers of vocals, synth and organs, and roaring guitars.  “Falling” begins with a strong music theater feel: piano and vocals, synth underlay, a Singor guitar solo.  This ballad is a strong point for Seventeen: unusual song structure, a varied 3/4 feel, and high intensity packed into three minutes.  “Walk Through Fire” is another huge piece of writing, clocking in at 10:34.  This might be my favorite piece on Seventeen, as it boasts a number of stylistic changes, modulating back and forth from metal ballad in 6/8 to a lively Celtic feel to extended piano-led segments.

The instrumental tune, “Ripples on the Water,” features Andy Latimer of Camel on lead guitar.  Scherpenzeel wrote the gentle piece with Latimer in mind, composing a rich call-and-response piece of acoustic guitar, keys, and glockenspiel, and layering in electric guitar as the song climaxes.

“All That I Want” and “X Marks the Spot,” the songs at the center of the album, are a pair of pop tunes with big vocal refrains.  Some of the lyric content here is fluff – hiding behind anthemic feel of “All that I Want,” somewhat contrived to fit the 4-2 count of “X Marks the Spot.”  Neither tune is bad per se, but both to me feel somewhat like rough drafts rather than final cuts, and the album wouldn’t have suffered for being two pieces shorter.

The whimsical, carnival-esque bounce of “God on Our Side” belies Seventeen’s most cynical and stirring commentary, thematically pitting the “voice of science” against the “voice of hatred” – AKA, whatever “name you praise” that justifies any kind of violence against mankind.  “Love, Sail Away” is another straightforward piece with a strong chorus hook, lyrically reminiscent of a certain Styx tune with a similar title.  At 8:51, “Cracks” is another ambitious piece of writing with a strong refrain and extended instrumental segments.  Much of its internal elements remind me strongly of Marillion material – i.e. Scherpenzeel’s particular synth patches and leads, the blend of vocals, Gildenlöw’s Pete-Trewavas-esque bass stabs, and Leijenaar’s heavy toms.  Seventeen’s final track, “To an End,” returns to some flavors more typical of Kayak’s discography: strings, keys, acoustic guitars, and gentle vocals.  The album closes with this restrained and thoughtful composition about true meaning and purpose, evaluating the worldview that very few things – if any – will last forever, not when memories themselves fade and die.

It took me a few spins to really get into this record, but I have come to appreciate what’s represented here.  There’s something formulaic about Scherpenzeel’s writing for Seventeen, but each piece – not to mention the collective whole – still manages to carry dense layers of nuance.  Schwertmann’s strong vocals really put me in the headspace of Bruce Dickinson or Geoff Tate, while the combination of Singor’s guitar leads and Gildenlöw’s work on the low end draw my attention to how much the musicians have been influenced by classic metal (DIO, Black Sabbath, Iron Maiden), not to mention the work of Steve Hackett and Pain of Salvation (Gildenlöw’s former band).

Should this incarnation of Kayak go on to publish an Eighteen, I’d love to hear a little more exploration of sound and theme that could expand the repertoire beyond what is currently represented.  I love the parts of this record that remind me of Queen and Asia, but I’d also appreciate a little more variety of feel and instrumentation – building on the sound and ideology without rehashing the same musical concepts.  Seventeen is nevertheless a solid album that hints at great things to come.