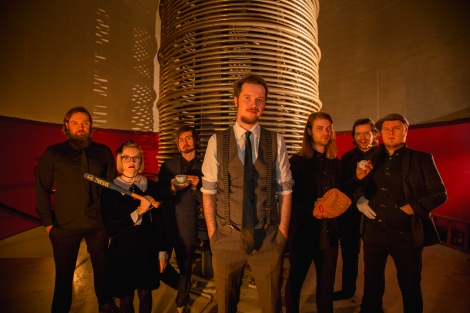 Norway’s Major Parkinson surged back this year with the eccentric and stunning “Blackbox”.  One thing that is often missing from some bands’ marketing is a follow up music video after the album release, but don’t count Major Parkinson among that crowd.  Here is the thought-provoking and dark video premiere of “Blackbox”.

My thoughts?  I love this song, obviously, and the video has very strong production values.  However, it’s the imagery and the meaning that really grab me here.  I’m not really going to go into that here, but the desperation and inner turmoil is so apparent in this video.  My 6 year old daughter Gloria loves this song and video, too, and she has only one question: “How are they going to get out of the blackbox”?  Indeed.

The band has this to say about it: “In the Blackbox music video, we direct the searchlight towards the abyss and the black shadow of the holy cow that we worship. The invisible rot of our society is slowly hatched from our own captivity – social media and the dark side of technology have become our priest and our church, where the joy of the hollow smile reflects our unfortunate wishes. The video is more about what’s not visible – the things that we hide. Made by Benjamin Langeland from Flimmer film in collaboration with blogger / designer Viktoria Aksnes and Major Parkinson.”