November’s Triple Feature presents three great bands representing various genres.  Regardless, they all show potential and have some strengths we wanted to highlight.

I can only imagine that Metalite’s founding went something like this: An instrumental power metal band booked some studio space in Sweden. An electro pop duo booked a studio as well. Since it’s Sweden and you can’t drive from Stockholm to Gothenburg without getting your car in the background of at least five metal or electronic band photoshoots, they were accidentally double booked for the same studio. Rather than sort the issue out, they decided to fuse their music together. Thus Metalite was born.

They would probably win more points for novelty on “Heroes in Time,” their debut album, if fellow Swedes Amaranthe hadn’t already released three albums with a similar mix of metal and EDM (though Metalite does get points for keeping the vocals clean), but this is still a fun, somewhat unique, pop metal album. There are catchy hooks and choruses, but not a lot of sonic variety, and the songs start blending together quickly. The lyrics are a grab bag of positive and upbeat cliches, without much depth. Ultimately, it makes for good workout music, or something that’s accessible gateway metal. While “Heroes in Time” fails to stun, there’s good playing and catchy hooks, as well as some promise that Metalite has room to grow from this debut.

My heart is conflicted about this new EP from Hungary’s Sungazers.  I can see the artistry and the unique nature of the music.  I can even see the eye for great art and just an overall tone that I really like.  However, I can also see the horrible problems that are present, and I hope the artist can take a little constructive criticism.  “Narrow Lungs” released on September 15th.

Sungazers is basically a solo project from Gergő Géczi, who handles vocals, guitars, and keys.  Guests include Judit Pohl on backing vocals, Máté Fazekas on bass and guitars, and Marcell Roncsák on drums.  The music here is more post-prog than anything else.  It contains elements of prog rock, alt rock, post-rock, ambient, electronic, and so on.  The mix of genres is one that really appeals to me and relates to the music I listen to on a regular basis.

“Narrow Lungs” has many strong elements, but also many weak parts.  For strong parts, I really appreciate the great guitars, with the driving alternative sound they have.  I also love Marcell’s drums, as he knows how to throw in some blast beats at just the right moments.  On top of that, Gergő’s composition is mostly on point, especially if you like melancholy alternative music.

The weaknesses, however, become apparent the more you listen.  “Narrow Lungs” starts the EP, and is a great little song with almost no real structure constricting it.  It has a distinctly melancholy vibe, and for some reason I hear A Perfect Circle all over it.  I rather like this song.  Despite liking the song, the mix is really amateur, and that goes for the rest of the EP, too.

After that promising beginning, however, the EP begins to fall apart somewhat.  “(forever)” is subjectively a very interesting track with some cool rocking moments and some great guitars, but it is completely undermined by some of the worst vocals I’ve ever heard (which is strange because the vocals are fine on the first track).  On top of that, some parts feel like the various rhythms (especially near the beginning) were actually written for different songs, but thrown together into a single track.  The worst offender, though, is the singing, which thankfully isn’t throughout the whole song.  The EP then ends with “How to Arrive Home”, which tries to emulate the first track somewhat, but it ends up feeling like it goes nowhere, despite having a pleasant tone.

Sungazers has lots of potential.  That is why I’m even including them on the site at all.  I believe in this artist’s ability to create music that feels artistic, while also feeling nostalgically familiar.  They don’t confine themselves to genre or structure, and that independent personality is something I love.  However, the artist has to be upfront about their issues: The mix is a fuzzy mess, the vocals need lots of work, and some of the rhythms don’t gel together all that well.  If they can address these issues, I could see a very impressive future for this project. 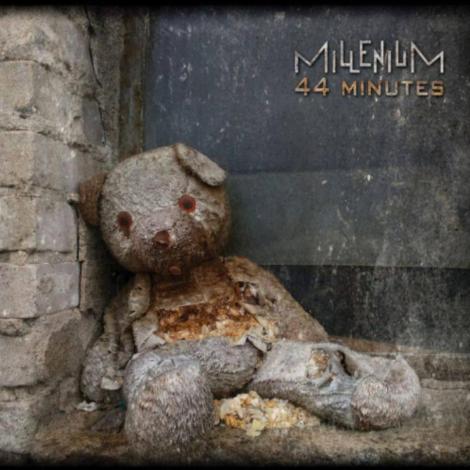 I’m not always a fan of the multiple-lead-singers dynamic, or the neo-prog vibe for that matter, but Millenium’s (sic) 44 Minutes overcomes those biases with its mature songwriting and memorable compositions.  Łukasz Gałęziowsk, together with Karolina Leszko, create such a rich blend of male and female vocal work that can only be appropriate for the ambitious scale of the genre and the material.  Furthermore, while the band often draw comparisons to Pendragon, Marillion, and IQ – acts typically associated with the neo-wave of progressive rock – I also hear the Pink Floyd and Alan Parsons influences, which sells me a little further on their vibe.

Another highlight for me is Dariusz Rybka’s work on the saxophone, an instrument Millenium have utilized on and off throughout their discography, but with increasing regularity since 2013‘s Ego.  Of course, the sax is no stranger to prog even if it is uncommon, but to hear it used effectively – without gimmick – is even more unusual. Gałęziowsk, Leszko, and Rybka share credits with the band’s founding visionary, Ryszard Kramarski (keys, guitars), as well as long-term members Piotr Płonka (guitars), Krzysztof Wyrwa (bass, Warr guitar), and Grzegorz Bauer (drums).  Altogether, these fantastic musicians round out the band’s full sound.

A benchmark 12th release (22 September), 44 Minutes is a strong album with unique transparency, detailing heavy themes and rendering the music a kind of kindred spirit to the listener.  The material incorporates elements of balladic metal, atmospheric soul, jazz, and even sound sampling for its thematically heavy compositions.  The lyrics for “Are We Lost” contain such wounded idealism as belief in the intrinsic goodness of humanity.  Grief and loss are at the core of “My Father Always Said,” a piece that stands at the heart of the record, addressing the album’s overall concept – that the death of our parents is what truly causes us to cease to be children.  The instrumental piece, “Lost Teddy Bear, Pt I & II,” implies these ideas of broken innocence and the fragility of childhood with a stirring mixture of lighthearted instrumentation, march tempos, and dulcet tones.

The album also contains one bonus track, “Ending Title,” a postscript of sorts for the record, which otherwise literally consists of 44 minutes of music.  This final track is fitting for the album’s themes, and is also an autobiographical piece for Łukasz Gałęziowsk, who concludes his career as Millenium’s lead singer after 18 years of work on the project – since its inception in 1999.  The key lyric of “I am leaving / I’m not quitting” speaks to his bright and ambitious philosophy of music and life, as well as the quality relationship he maintains with the other members of the band.  In that regard, Gałęziowsk literally sings himself out of the band with this unique curtain call, creating an enduring and fitting epitaph.

44 Minutes is a showcase of strong writing, gorgeous instrumentation, and authentic lyrics, altogether employing the raw dynamics that make Millenium’s music so emotional.  This record is as much a page turned in the band’s personal history as it is a testament to their maturity as composers.  The symmetry of the ticking clock at the outset of the opening track, returning at the conclusion of “44 Minutes,” reminds the listener that the quintessentially human themes covered in the past 44 minutes of music are not restricted to that time and space alone.