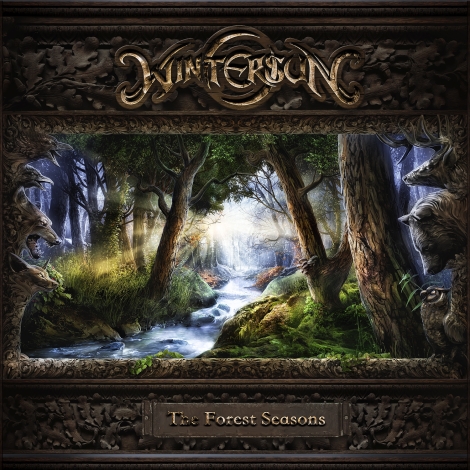 Every so often, a new album grabs me on first listen and doesn’t let go.  It’s even stranger when it’s from a band that hasn’t really grabbed my attention like this in the past.  It’s even weirder when it’s an album that has been getting some flack around the Internet.  Wintersun’s new album “The Forest Seasons” is set to release this month, and I find myself falling head first into this very enchanting album.

Wintersun is one of those bands that most people know, but the band doesn’t release albums as often as fans would like.  This particular album was thought to be a sequel to their celebrated “Time I” from back in 2012, but it turns out not to be at all.  For me, that’s totally okay, so I don’t see why this fact, or the method in which this album was funded, should affect my review like it has so many others.

The band consists right now of Jari Mäenpää on vocals, studio guitars, and programming; Kai Hahto on drums; Jukka Koskinen on bass; and Teemu Mäntysaari and Asim Searah on guitars.  The band is labelled as “epic metal”, but they are definitely in the progressive black metal and folk metal vein if that label doesn’t clarify anything for you.  “The Forest Seasons” is probably their most varied and most eclectic release yet, however, so they also transcend most labels given to them.

Most importantly, “The Forest Seasons” is a concept album, and it doesn’t seem like some other reviewers out there are getting that idea.  This is meant to be a grand inner journey that is expressed using the seasons of the year within a metaphorical forest.  Using the transitions of the seasons, we get to see hope, dominion, doubt, despair, regret, and apathy in the heart of the main character, and it’s a devastatingly human thing to experience.  The album ends on notes of hope in the midst of uncertainty and even despair.  The emotions here are potent and very well expressed.

Because of this concept, the atmosphere of the album really matters.  I find that the band really nails this aspect, too, because the tone is set from the very beginning with lush background noises and even these haunting anomalies to give that extra subtlety and mystery that we all love.  The album continues this way, and the ambiance changes with each season; sometimes feeling warm and whimsical, and other times feeling cold and foreboding.

In keeping with all of this, the music is darkly cinematic, with colossal movements and subtle shadows flitting just out of sight.  This album is also folksy and — forgive me for saying this — has this Lord of the Rings thing going on with it.  The forest really does feel like something straight out of Tolkien’s works, like you are visiting the depths of Mirkwood Forest.  So, with sweeping orchestration, growling guitars, a fantastic rhythm section, and lots of gorgeous accents, this album howls into our ears.

As expected, the musicianship is outstanding.  Kai’s drums are really very punchy on this album, with lots of well-placed blast beats that accent the rest of the music, and I also find Jukka’s bass to be an unsung hero here for providing so much volume and wholeness.  Keys are the real highlight here, as is the orchestration.  Both of these are whimsical and epic in feeling, and are nearly constant in their melodies and additions to the overall sound.  Jari’s guitars are often used in that distorted “white noise” fashion just to set up the rest of the music, but there are plenty of tasty solos and riffs to be found that are just as epic as any of the keys.

The mix on this album is way better than on “Time I”.  I really didn’t like the mix on that album because it felt claustrophobic and somewhat weak.  “The Forest Seasons”, though, has plenty of oomph in the bass and drums, lots of edge in the guitars, and a wonderful brightness in the keys and orchestration.  All of these can somehow be heard simultaneously without outdoing each other, which I feel was a major failure at times on “Time I”.  This makes for an immersive experience that you won’t want to end.

Now, the album has only four songs on it (per the concept), but they are all over 12 minutes long.  I think it’s worth my time to describe all four individually, so I hope I don’t lose you.  First off, “Awaken from the Dark Slumber (Spring)” starts the album with gusto; using lots of orchestration, some awesome riffage, and these feelings of a new change in life: to begin once again.  The vocals are suitably almost all harsh and raspy here, as the seeds of life arise.

Next, while the whole album feels fantastical, “The Forest That Weeps (Summer)” feels more so than the other tracks, somehow.  It also has this tone of anticipation and future glory, like breaking free for the first time.  The keys are more subtle here and there are some delicate strings, too; but the vocals are almost all clean and have this conquering power to them that is quite distinct, especially in the more monastic segments.  It’s a truly stunning track.

“Eternal Darkness (Autumn)” is an interesting track because it portrays more of the approach of darkness as opposed to an immersion in it.  It feels colder, like the fog has begun to move into your world.  It feels ominous and menacing, but with slight sounds of the folksy comforts from the first two tracks, as if to show that the light of the world is still present, but beginning to be shrouded.  This track is faster paced and all about dark textures with hovering orchestrations containing plenty of madness.  The vocals here are raspy with haunting harmonies.  The last portion of the song is appropriately heavy and epic, as if something is being unearthed.

My favorite song, though, is definitely “Loneliness (Winter)”.  The feelings on this song are so potent and laid bare, honestly.  The song features probably the most beautiful melody on the whole album, and overall this track is also the most straightforward song, too.  The ponderous melody and orchestration are so gorgeous, and somehow muted just a bit to give you this feeling of the grey silence of winter at night.  This song is so full of longing, despair, and regret that it just breaks my heart; and, of course, I love that kind of thing.  The lyrics long for the warmth and life of Summer once again, and so the vocals here are mostly clean and just very expressive.

Overall, “The Forest Seasons” is an album that is both epic and nuanced, heavy and melodic.  The moods present in each song are right on the money, and the instrumentals throughout the album will get your head moving, too.  I’m seriously impressed with this album and the growth I see in the band’s work, and now I’m very excited to see where they go from here.  Hopefully, we will be hearing more from them sooner rather than later.

2 responses to “Wintersun – “The Forest Seasons””