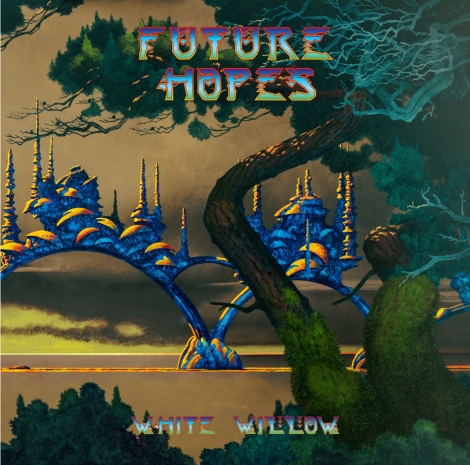 White Willow has always been an anomaly for me.  I love their sound, and I’m especially a big fan of their 2000 album “Sacrament”.  I haven’t delved into their discography as much as I’d like, though.  This new album “Future Hopes” took me by surprise, as the sound is a bit different but the music is as good as ever.

White Willow consists of newcomer Venke Knutson on vocals; Jacob Holm-Lupo on guitars, keys, and synth; Lars Fredrik Frøislie on keys and synth; Ketil Einarsen on flutes; Ellen Andrea Wang on bass; Mattias Olsson on drums and e-bow.  Other musicians here include Hedvig Mollestad on guitar, David Krakauer on clarinet, Ole Øvstedal on guitar, and Kjersti Løken on trumpet.  The band plays progressive rock through and through, but this album does have layers to it that really feel amazing.

This album is probably the most ethereal I’ve heard from the band.  It features a healthy dose of Vangelis and Tangerine Dream, sometimes even a bit of Jeff Wayne.  I’m referring to the electronic and synth side of the album, of course.  “Future Hopes” offers us some truly incredible electronic soundscapes that weave and dance in the dim light alongside excellent guitars and inventive rhythms.  This contrast between rock and electronic music is the greatest strength of this album, giving it a mysterious personality and this long lasting allure that I did not expect.

Obviously, Lars and Jacob provide absolutely stunning synth and keys here.  They really make this album into a flow of emotions and colors.  Jacob’s guitars ooze with feeling.  I’m a sucker for super elongated guitar notes and solos, and this album has that in spades.  Ellen and Mattias also have amazing skills on bass and drums, coming up with some truly inventive and interesting grooves.  The guest musicians put the icing on the cake with beautiful clarinet and trumpet in all the right spots.

The new vocalist, Venke, has a voice that is definitely more delicate than many would probably want.  I think she has a great voice, though.  If you are looking for a deeper voice, look elsewhere.  If you like the vocals from iamthemorning, Frequency Drift, etc., you will be right at home here.  She does have this slightly “I have a head cold” thing going on, but it honestly does differentiate her from other singers and it works well with the emotional and desolate themes of the album.

I’m very impressed with the balance between the electronic and rock elements.  Neither is consumed by the other, and they just sound so natural on every single track.  When I first heard “In Dim Days”, I felt like I was in heaven.  This album is also very good at emoting through music, rather than just words.  You can really feel the haunting desolation in instrumental tracks like “Where There Was Sea There Is Abyss” or the fantastically Blade Runner-esque “A Scarred View”.  That latter track starts out as the darkened ambient electronic track that emerges into the progressive rock spectrum slowly and perfectly.  I think “A Scarred View” is definitely my favorite track here.  The electronically driven middle is absolutely fabulous and makes me want this on vinyl.

Other favorite tracks are “Silver and Gold”, a short ballad with this almost Christmas-y sound to it; and also the bonus track “Animal Magnetism”, a highly electronic song with this primal nature to it.  It’s almost a shame that it is just a bonus, as it has this awesome clarinet solo that really needs to be heard.  The other bonus track is “Damnation Valley” is simply an outro of sorts, but it is beautiful and piano-driven.

“Future Hopes” is forward-thinking piece of music with lots of emotion and a ton of electronic flow.  The sound is definitely a little different than their past albums, but I rather like it due to the mournful tone and the synthetic nature of the music.  I really feel like this White Willow album deserves more attention, as there are parts on this album that best almost anything else I’ve heard this year.