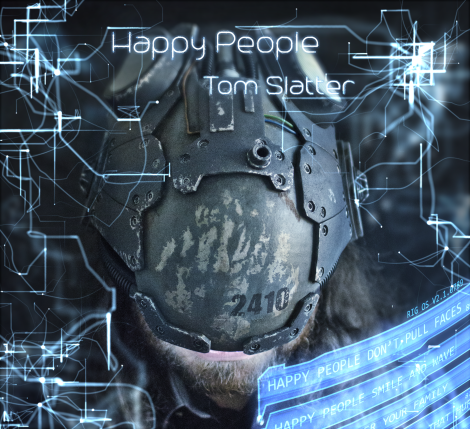 It’s honestly been a while since I’ve checked out a new Tom Slatter release.  His music is quirky as they come, and sometimes you just have to be in the mood for his tongue-in-cheek dark humor and his starkly British sensibilities.  That said, I’m really glad that I listened to his new release “Happy People”.

Tom Slatter has a great band behind him.  The band includes Tom on vocals and guitars; Daniel Bowles on guitars and keys; Jordan Brown on bass and keys; Michael Cairns on drums; and Suzette Stamp on backing vocals.  The presence of the band is very noticeable here, as the production feels bigger and better than some of his earlier albums.  The style they play is hard to nail down to specifics, honestly.  Tom says it’s not prog, but that’s a totally proggy thing to say, so I’m ignoring that.  The music may come across as retro psychedelic prog rock to most people, but I hear influences from the 60’s and 80’s on here, too.  Honestly, Tom is himself, and he really doesn’t sound like anyone else.

Tom also doesn’t pull any punches lyrically.  I immediately drew a connection between the lyrical content here and on the new album from The Mute Gods, though it’s not verbatim.  It’s all very political and apocalyptic in tone, though, predicting the end of the world due to various people groups.  However, what makes Tom’s version so much better is the satire and humor present.  The Mute Gods offered an unrelenting whine-fest, but Tom approaches the subject from a classier, steadier, more well-read perspective; not to mention his writing is far more poetic.  In addition, the perspective is also more individualistic and experiential, which makes it more relatable.  Both of these writers, though, want to raze this world to the ground; in jest, of course (maybe).

Musically, the shining star of this album is surely the guitar work.  It ranges from amazing solos (seriously, they are incredible) to this strangely 60’s vibe in some of the licks.  I even feel some punk or surf music in here, and I’m sure Tom will hate that I wrote that.  Honestly, the name “The Beach Boys” keeps playing over in my head, and I can’t pinpoint why that is.  Overall, though, the guitars are top notch throughout the album.

The rest of the instrumentation is wonderful, too.  The bass feels great, and I think the drums specifically sound fantastic in the mix.  Keys are all retro in style, but we get some sweet synth, too.  All in all, this album just sounds great, which I have noticed is a common element of all Bad Elephant Music releases.

Another thing I noticed about this album is that Tom doesn’t tend to repeat himself very much, at least musically.  So, on one track, you’ll hear this sweet synth solo; however, you won’t really hear another one the rest of the album.  The same goes for some of the electronic elements, among other things, which only really appear once or twice.  He seems to like diversity and variety, and he doesn’t like to crowd his music.

My favorite tracks are “Happy People” for being just a great song, “Satellites” for its addictive chorus, “Fire Flower Heart” for its classy and poetic soul, and “Set Light to the Sky” for its gleefully dark premise.  Other great offerings would be the electronically laced instrumental “Tracking Signals” and the sweet guitars of “All of the Dark”.  Honestly, now that I think about it, that last one might be my favorite.

Tom has probably made the best album that I have personally heard from him.  It’s consistent, melodic, psychedelic, and well written.  This could very well be the album that really breaks Tom into the vast, lucrative world of progressive rock.  I think David over at BEM should maybe keep him around for a couple more albums.