“I am not this body”

Sometimes I’m wrong.  Okay, I’m wrong quite often.  Back in 2013, I reviewed the fourth album from Persefone, progressive tech metal band from Andorra, a small country in the middle of Europe.  I wanted to like it: I really did.  “Spiritual Migration” had the themes and the gorgeous production that I love, but it was rather relentless; and, I felt, not very melodic.  There was just something that kept me from liking it very much.  Fast forward to 2017, Persefone is set to release their fifth studio album “Aathma”, and my opinion has made a complete 180.

Persefone plays in a genre of which I’m not normally fan: technical progressive death metal.  While I can appreciate the technical proficiency usually present, there needs to be something more to draw my interest.  I believe this band has that extra something.  Persefone’s brand of metal includes harsh vox, brutal riffs, gorgeous keys and orchestrations, and supreme drumming.  The band consists of Marc Martins on harsh vocals; Miguel Espinosa on keys and clean vocals; Carlos Lozano, Jordi Gorgues, Filipe Baldaia on guitars; Toni Mestre on bass; and Sergi “Bobby” Verdeguer on drums.

This album is more than a goregous cover.  “Aathma” features all the elements I loved from their previous album, plus what I thought was missing.  “Aathma” is a huge album; absolutely breath-taking quite often.  “Aathma” feels much more whole.  It has luscious musical space filled with sweeping piano melodies, wonderfully ethereal tones, and this feeling like every track is inspired.  The previous album was incredible from a technical level, but it felt like a never-ending barrage of beats and riffs to someone like me.  This album feels more spiritual, more enlightened, and simply more beautiful.

The structure of the album lends a hand to all of this.  Many of the songs are indeed very heavy and technical, but there are melodic, spacey interluding songs that break up the wall of sound into digestible pieces, not to mention the lift they have on our hearts.  With this album, then, Persefone places themselves squarely into two realms: The heavier tech metal side with bands like Chaos Divine, and also the softer, more spiritual side with bands like Breaking Orbit; the unifying factor being the spacey atmosphere and a tendency towards light rather than dark. 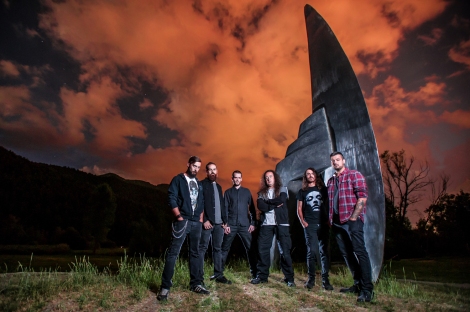 So, you have songs like “Cosmic Walkers”, a beautifully elemental song that sucks you in to another dimension of existence.  Other songs, like “Prison Skin”, are incredibly heavy with addictive grooves that really make sense only with time.  Still other tracks, “Spirals Within Thy Being”, combine both of these worlds with great transitions between them.  My favorite track, “Living Waves”, is a supreme example of this, starting out heavy and transitioning into this spacey groove with soaring vocals.  It is the perfect combination of the elemental beauty of the interludes and the heavy machinations of the metal.  It is this musical high that really makes you want to run and tell someone about it.  Another similar track is “Stillness is Timeless”, and I have the same feelings about it, too.  As you can tell, this is an album that requires headphones due to the intricacies of both the hefty guitarwork and also the soaring keys that stake their own claim on the music.

Speaking of vocals, both Marc and Miguel are on vocals here.  Marc’s vocals are the harsh vox, and they are quite brutal at times.  This is probably the most difficult part for me.  I like harsh vox, but sometimes they are difficult for me to process.  What makes it so easy on this album, however, is Miguel’s stunning clean vocals.  His tone is higher, and is thus the perfect contrast to Marc’s grunts.  This interplay is one of the highlights of this album for me.

“Nor this realm of senses”

Another highlight is the guitarwork from Carlos, Jordi, and Filipe.  These guys lay down some hefty riffs, but it isn’t just a barrage of sound.  Their work is quite delicate at times, and they space out the riffs perfectly without becoming djent.  Toni’s bass and Sergi’s drums are absolutely monsters here, crafting massive grooves that lie beneath the guitars, making for more and more layers of sound.  Finally, Miguel’s keys are the top highlight for me on this album.  His style is this ethereal rhythmic wind with bright tones and this spiritually full feeling of presence and atmosphere.  It really sends chills down my spine.

But it’s not just the music that moves me here.  The lyrics are also of the highest quality.  “Aathma” is a term that means “individual self” or maybe just “soul”.  As you can imagine, the album has very enlightened lyrics concerning the individual that lies at the center of each of us; not our body, not our intelligence or brain.  Each of us is an aathma, an essence that will exist forever and which is connected to all others.  It’s an album about the unseen spiritual truth of our existence and the universe around us.  The music, then, really plays into these lyrics, raising our hearts to unknown places and hidden truths. 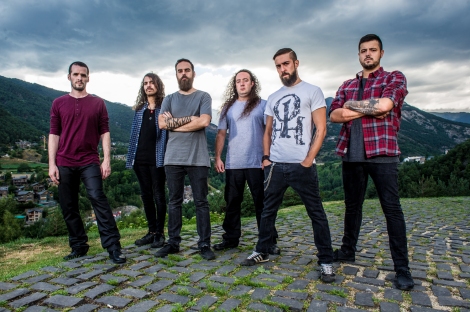 The music and lyrics culminate in a sprawling multi-track suite of songs called “Aathma”.  This suite is simply spectacular.  It is everything I hoped this album would be: pure, ethereal, and complex.  Its beauty is unlike anything I’ve heard this year so far, with this graceful texture that exudes peace and hope.  It is a suite that stands tall with some of the best I’ve ever heard.  The final track of this suite is a glorious end to the journey to enlightenment: Gorgeous female vocals sing about the soul and the vast realm of existence which we so often ignore, all of this is backed by giant orchestrations and keys to tear-inducing effect.

“I am just this soul”

This is such a diverse and masterful album of sheer elemental beauty.  Like I said, most of you know that I’m not a huge fan of most harsh vox or of relentless tech metal: However, I find this almost to be a happy medium between the heavier, technical metal and the ethereal, uplifting soundscapes I so love.  Back and forth, this album hits us head on with brutal riffs, but also delicate piano melodies and divine tones.  It walks that fine line to great effect, making the hairs on my neck stand on end several times throughout the album.   It impresses the hell out of me that this band can achieve such strength of composition in both the heavy and soft sounds, while also maintaining this feeling of serenity and otherworldliness that elevates this album to new heights.

So, I was wrong about this album.  I expected not to like it, but it has absolutely blown me away in every way possible.  Persefone has the composition skills, the spiritual insight, and the technical chops to be one of the biggest bands on the scene today, and I really hope to hear more from them very soon.  This is an album that transcends so much of life and other music, and I think you really need to hear it.