It was back in 2013 that I first came into contact with Mark Healy of Hibernal.  We were both in the forums for progarchives.com, and he mentioned his debut Hibernal album to me.  “The Machine” ended up being a masterpiece to me, and so I’ve reviewed every album since then, and he continues to impress.  His new album “The Dark of the City” is set to release on January 12, and I feel like this might be his best one yet.

Hibernal hails from Australia, a recent hotbed of amazing progressive bands.  The basic style has been pretty consistent through the years.  Hibernal plays something like post-rock with strong sci-fi tones and emotional climaxes.  It’s not overly technical, but it is perfectly in mesh with the most distinguishing trait: the story behind each of the albums.  Mark’s stories are told through actual voice actors and sound effects, almost like a theatrical radio program; and the music weaves in and around and through the dialogue to enhance it emotionally.  I’ll never forget some of the moments on past albums where the music gave me goosebumps during a particularly emotional situation.  “The Dark of the City” again has that type of effect.

First, let’s discuss the music.  This is the first time to my knowledge that Hibernal has officially had two members.  Hibernal is now Mark Healy and Rowan Salt.  Mark handles most of the instruments and the writing, and Rowan handles the bass guitar and the editing.  You can tell that these two have been working together for some time now, as the music seems more concise and doesn’t wander as much, either.

Somehow, the music seems even spacier and more sci-fi than ever, and I just love that.  Mark’s guitar solos are the strongest they have ever been, and I feel Rowan is really beginning to understand the bass needed for this type of music.  Mark’s drums, too, are hefty and satisfying.  Electronic accents are also probably the most complex of the series.  The music ultimately has this fervent intensity to it that makes even my one-year-old daughter Iona headbang (she’s a good headbanger).  I would say there is also more of an alternative rock edge to much of it, too, as there is more distortion than in the past.  The music is overall more climactic, more intense, and more cyberpunk.

Now, let’s discuss story.  I feel like Mark spends more time on the setting of the story this time, which is great for those of us with an imagination.  You can feel the gritty depression of the city juxtaposed against the hope of the rockets blasting off for another world.  The city is dark and drug-addled, but the sky is specifically detailed as colorful and riveting.  Mark provides sound effects that really pull you in, too, and the voice work is the best of all his albums, in my opinion. 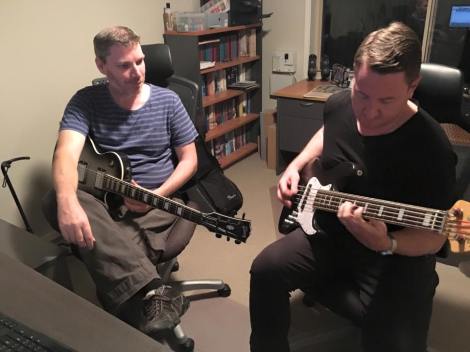 Faleena Hopkins returns as a new character named Moreno, and Scott Gentle returns as another new character named Trask.  The basic plot behind the story is that Moreno, a police detective, is on the hunt for a monster that killed her past partner.  Trask joins her as they search the filthy depths of the city for this killer.  What they find will change them forever.

Mark’s story is brilliantly written here.  He leads you one way, and then another, and you aren’t very sure where it will end up, honestly.  Characters make statements and do things that mean something totally different than what you think they mean.  It takes multiple listens to appreciate it fully, for sure, because of the nuance and specific words spoken that mean more after the twist is revealed.

There is a twist at the end, as usual, but it is not very obvious, and the resulting situation throws us headfirst into a moment of coldheartedness and numbness so hypnotizing that it might be the best writing Hibernal has ever offered.  It gives me chills the more I think about it.  “Loose Ends” and “Monster” are the tracks in question here, and they give me goosebumps, especially the latter.

Those two tracks are probably my favorites, but I also really love the title track “The Dark of the City” for its soaring music, “Night in Carson Bay” for its gritty setting, and “The Pier” for its watery tone.  Every track on the album, though, is oozing with life and hard situations, while also featuring convincing dialogue and great voice acting.  While I love all of this about the album, the message and lingering effect of the story are what really sell the experience.

“The Dark of the City” is an album of emotional conflict, a longing for meaning, and stark contrasts between hope and despair.  We get to see the hopelessness of the deep city set against the desperate attempt at freedom in the rockets launching from Earth, and this plays out in the story arch of the characters, too.  While at first I thought I may still like “Replacements” better, this new album has really grown on me, and I think it may be Hibernal’s best album yet, especially in the case of the storytelling ability.  It’s time to experience Hibernal.