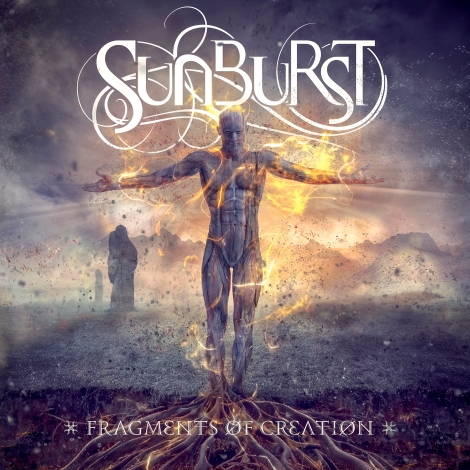 Sometimes, I don’t approach an album searching for innovation or some sort of uniqueness.  No, sometimes I just want a solid, approachable album of awesome music, especially when it comes to progressive metal.  Sunburst’s debut “Fragments of Creation” is just that.  This album has fed my love for epic progressive metal albums something fierce recently.  So, I’m not looking for something completely new here.  I’m just looking for awesome prog metal.

Sunburst hails from Greece, and so you’ll hear a hint of their revered progressive metal style in the music.  The label itself, Inner Wound Recordings, describes the band as a combination of Dream Theater and Nevermore.  The results, though, are much closer to Darkwater, Pathosray, and even shades of Symphony X and Vanden Plas.  This means that the music consists of heavy guitars, thundering drums, gorgeous bass tone, and the high pitched metal vocals.  It also means that the music is slightly thrashy, darker in texture, and the focus isn’t always just on technical fireworks: Melody is a big focus here.  And, sometimes, heavy guitars juxtaposed against soaring melodies are all I really want.

The band consists of Vasilis Georgiou on vocals, Gus Drax on guitars, Kostas Milonas on drums, and Nick Grey on bass.  I’m super impressed with Vasilis’ vocals here.  He reminds me so much of this righteous combination of Roy Khan (ex-Kamelot) and Henrik Båth (Darkwater).  His tone is so gravy to my ears, and his range is fantastic.  This guy is something special.  His hair is also very nice.

I’m also impressed by the other performances here, too.  Gus’ guitars are wondrous to behold.  His guitars are driving, ferocious riff monsters complemented by some licks that sound like they should be impossible.  The tone here definitely falls into the Symphony X side of prog metal with that gritty, almost thrash feeling.  Kostas and Nick lay down a thunderous spectacle of rhythm; mixed well and with plenty of oomph.  Overall, these guys have serious chops, but also know how to write a good song.

The lyrics on “Fragments of Creation” are typically somber and philosophical, but I really haven’t delved into their meaning too much yet.  What I like about what I hear, though, is that the lyrics are highly philosophical and ethereal, but also very personal and emotional.  Vasilis delivers his catchy vocal lines at a high emotional tone from beginning to end: He makes the lyrics believable and very delicate.

“Fragments of Creation” is like watching the Lord of the Rings of prog metal.  The lyrics are fantastical, though only in a philosophical sense, but you also meet humans on very private level.  However, there is also spectacle, huge movements, and this feeling like you never want to leave.  That is an album I can enjoy fully without worrying about pretentious “innovation” or this expectation of them being as progressive as possible.  Sunburst simply makes great music.

Favorite songs here are “Out of the World” with its crushing hook, “Symbol of Life” with is addictive licks, and “Beyond the Darkest Sun” with its feelings of elsewhere and nowhere, even.  I also love “Forevermore” with its balladic sensibilities.  I also really like, but haven’t completely wrapped my head around, the 12 minute epic “Remedy of My Heart”.  It feels very Symphony X in its massive scale, though it seems to be a very personal song ultimately.  It’s that dichotomy between scale and humanity that makes “Fragments of Creation” memorable and special.  It is that artistic expression that has attracted me to this wonderful album.