Big guitar sounds, spacious instrumentation, and memorable rock hooks altogether define John Wesley’s songwriting, characteristics that have remained consistent across his solo discography.  Though bright in comparison to his work with Porcupine Tree, Wesley’s music has always been a notable bridge between a singer/songwriter mantra and that of a heavy rock guitarist.  Citing the influence of his 70’s musical heroes while remaining true to his own stylistic sound, John’s newest release particularly channels an era of rock music known for bombastic sounds and ambitious aims, yet still retains a modern rock feel.  A Way You’ll Never Be dropped on October 7th, and although the publicity ball has been a little slow to get rolling, the record has received much positive feedback from fans and reviewers over the last few weeks.

Of course, Wesley’s career isn’t limited to his 9-year tenure with Porcupine Tree.  Prior to that, he was the founder of Autodrive, who were active until the early 90’s, and he has more recently also toured as lead guitarist with both Sound of Contact (to support Dimensionaut in 2013) as well as Bigelf (alongside Flying Colors in 2014, in support of his own release, Disconnect).  His solo career has now produced seven “crossover prog” records to date, and despite the “is it really prog?” arguments these kind of pop/rock-influenced releases inevitably raise within the progressive community, this newest collection demonstrates to me that a). John hasn’t run out of gas or creativity yet, despite his considerable time in the industry, and that b). his roots remain prog in nature, even if the product is not as simply defined.

A Way You’ll Never Be opens with the heavy-hitting “By the Light of a Sun.”  Wesley’s big octaves and double-tracked guitars create a striking texture reminiscent of 90’s grunge.  You can hear the Porcupine Tree callbacks as much as you can hear the Soundgarden influences.  The album’s first guitar solo is a tapestry of reverb and compression.  The next tune, “A Way You’ll Never Be,” appropriately clocks in as the longest track on the record (7:18).  With some Alex Lifeson-style riffing and an outro that wouldn’t be out of place on a Rush record, this track demonstrates Wesley’s characteristic writing style: heavy, restless guitar licks (as opposed to chugging chords) partnered with raw, charismatic vocals, bass doubling, and syncopated drumwork.

“To Outrun the Light” plods like a Black Sabbath march, putting me in mind of the intros to either “War Pigs” or Alice in Chains’ “Bleed the Freak.”  Wesley’s solo on this slow tune is profound and agonizing, reflecting the song’s lyrical sentiment that sometimes life’s abrupt and inevitable changes can cause us to lose sight of who we truly are.  While it’s hard to point to a favorite song on the album, “The Revolutionist” probably claims that spot, and not just because it’s the overall proggiest track (along with the opener).  The complex meter and driving intro riff again put me in mind of Kim Thayil or Wesley’s own work with Porcupine Tree, and the song’s feel and theme render it a microcosm of the album itself.

For “Nada,” Wesley breaks out the acoustic guitar for a brief textural variation.  As might be expected, the word “nothing” features prominently in the lyrical content, and the extended outro grinds to a sudden conclusion.  “The Silence in Coffee” maintains a loose, echoing atmosphere throughout its length, with harmonic guitar feedback providing a counter melody.  Rhythmically loose, devoid of any drums or percussion, the song fades into eerie guitar squeals at its conclusion.

The album’s home-stretch begins with “Unsafe Space,” a 4:00-minute instrumental guitar jam that opens with an extended solo in the vein of Hendrix or Roger Waters.  The next track, “sun.a.rose,” has moments of vigorous edge and sections of reflective, half-time ballad, all of which put me in mind of compositions by Joey Eppard’s metal band, 3.  “Epic” and “Pointless Endeavors” close out the record – the former with dark, Alice in Chains style dissonance, vocals doubling guitars, and a central riff that screams Tony Iommi; the latter which hints at the chromatic descent from Zeppelin’s “Dazed and Confused.”

A Way You’ll Never Be is a very listenable album.  It’s loud without being oppressive, guitar-centered without sacrificing other elements of composition, and complex without being complicated.  Wesley’s guitar orchestration throughout the record maintains a powerful, live energy via heavy compression and echoing reverb.  After sitting with the record for several weeks, I can conclusively say that it is a solid collection of well-written songs that are each writ-small representations of Wesley’s philosophy of music and songwriting.  If you’re a fan of hard, guitar-driven rock from the 70‘s and/or 90‘s grunge, then this is an album for you.

For the remainder of 2016, Wesley will be touring A Way You’ll Never Be alongside Marillion on their US tour for F.E.A.R. (the first date being tomorrow night in San Francisco), in addition to supporting Steven Wilson for several dates starting in November. 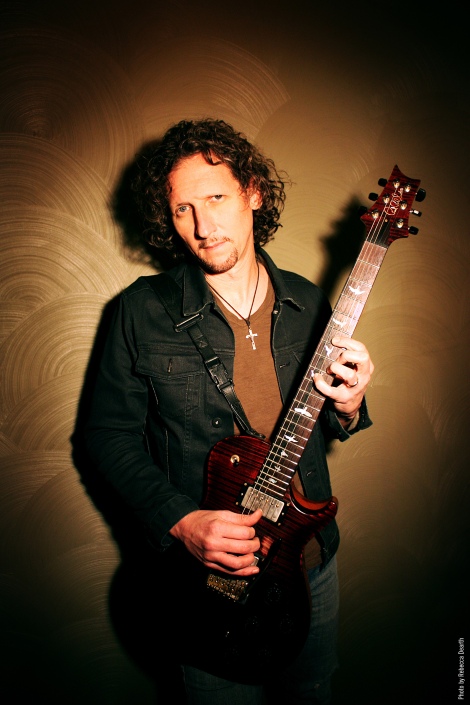