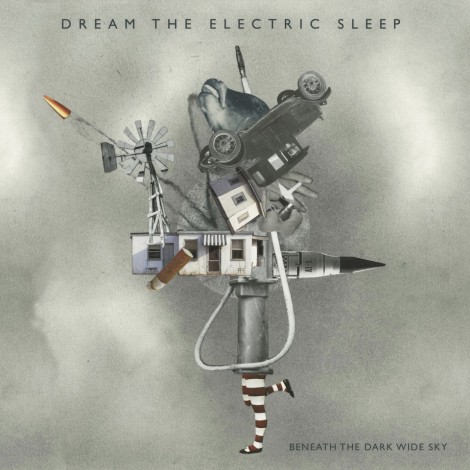 I first discovered Kentucky’s Dream the Electric Sleep (not Sheep) back in 2014 upon the release of “Heretics”, an album that was emotionally palpable both musically and socially.  DTES had crafted an album that spoke out against injustice, but they also composed an album that felt fresh, colorful, and new.  Similar to bands like The Dear Hunter, they have carved out a progressive niche that sounds distinctly indie in approach, something that I feel is happening more and more in that scene.

Their new album, “Beneath the Dark Wide Sky”, is set to release this month on Mutiny Records.  I’ll just come out and say it: This new album is something of step down in a few ways, though it is still enjoyable.  When I say “step down”, I mean that the album is less progressive, more song-based (not a bad thing, really), and even a little one note, overall.  Is it a disappointment?  I won’t call it that, as most of what I love about DTES returns, too.

The band again consists of Matt Page on guitars and vocals, Joey Waters on drums, and Chris Tackett on bass.  These three musicians all offer great performances that are definitely more technical and complex than you’d expect.  Matt’s vocals are again a highlight, though possibly mixed a little flat (not his fault).  Joey’s drumming is pounding with great fills and just an overall massive sound.  The guy’s huge, so I feel bad for the drum set.  Chris’ bass is also a huge complement to the album, and maybe even the foundation of the music, being moody and deep.  The mix, I find, is rather dull and does not highlights the strengths of these musicians.  The drums and bass sound pretty good, but the rest of the album just feels awash in grey.

Now, I didn’t mention Matt’s guitars yet because I feel like the change in styles between albums here is most seen in his guitar work.  While it is certainly skilled and even sublime at times, his guitars represents a shift towards a certain grey brightness, or maybe a bleak haziness.  The whole album is in the upper range of notes, sounding much like Anathema’s towering melodies and guitars, at times.  In fact, the album has a certain post-rock or even shoegaze feel to it, though vaguely.  All of this is nothing bad at all.  I mean, I love Anathema and that style of emotional, towering sounds.  However, I just don’t feel like the band pulls it off as well as it has been done, and, being only a three-piece, I daresay that other layers of sound are missing here to give the music that extra contrasted lift that it needs so badly.

“Beneath the Dark Wide Sky” starts out strongly with four wonderful tracks.  “Drift” and “Let the Light Flood In” are both catchy and the former even has strong feelings of drifting off course.  The latter is the single for the album and is fairly straightforward.  “Flight” is giant song of uplifted feelings and really tugs at your imagination, while “We Who Blackout the Sun” is one of my favorites on the album, being an instrumental track that feels grittier and even darker.  The album ends with a strong duo of tracks, too, called “Black Wind” and “All Good Things”.  The former is similar to “We Who Blackout the Sun” in that it features the darker side of the album that simply has more personality along with more interesting highs and lows.  Much of the album is all upper range all the time, and so it feels good to go underground for a bit.  Those two tracks are the best ones on the album, for sure.  The last track, “All Good Things”, is a short meandering piece that is a perfect ending after the emotional energy of the previous song.

I missed some tracks, didn’t I?  Beginning with “Hanging by Time” and extending all the way to “Headlights”, there is a massive space in the album that feels incredibly monotonous.  There is never a break in the high strung sounds, and, though sublime at times, these tracks feel more tiresome than ethereal.  I can’t help but wonder when the album will be over when I hit the middle of these tracks.  “The Last Psalm to Silence” puts up a valiant effort at breaking up the numbness, being a short instrumental that is very pleasant.  However, coming right after “Culling the Herd” and its severe flatness, it just doesn’t quite succeed.  Again, I feel like the album could have used some more layers here to add and also provide contrast to the constant barrage of high tuned guitars.

I hate to say anything bad about DTES.  They are magnificent musicians and there are some amazing tracks on this album.  They definitely go out on a limb with their style and substance.  However, I feel like the flat mix and the general greyness of the album do not work in their favor.  Many other bands can achieve that gritty darkness or bleak greyness to much better, and even masterful, results, and so this album just feels lost in the crowd.  In some ways, it just feels like the band left their vivid color and warm personalities behind after “Heretics”, and I really hope they can find it again.