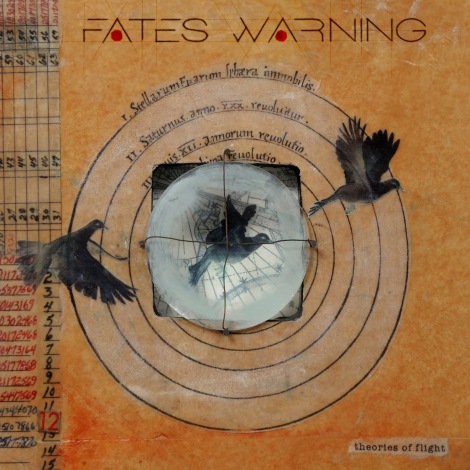 It can sometimes be difficult for older acts to keep up with some of the newer ideas being released, or at least the energy of the newer bands.  In some cases, the fans just overlook the recycled state of their favorite classic bands’ output, and, somehow, they even accept very embarrassing records (see Yes’ latest).  Fates Warning, however, doesn’t seem to have that issue.  They are one of the founding progressive metal bands, influencing even the likes of Dream Theater.  Yet, they still don’t get the credit due them.  Their new album “Theories of Flight” proves that they still have it in a way that other older bands could only dream.

Perhaps it is their understated style that keeps them from full blown recognition.  Fates Warning has never been about monster riffs, technical wankery, or “epic” instrumentals.  No, Fates Warning has always been about shades and ideas, atmospheres and textures, abstractions and feelings.  The new album continues this trend with some marked changes and improvements over their last album “Darkness in a Different Light”.

The whole band has returned from that aforementioned album.  The line-up includes the great Ray Alder on vocals, Jim Matheos and Frank Aresti on guitars, Joey Vera on bass, and Bobby Jarzombek on drums.  The band hasn’t evolved in any overtly critical ways; instead, they have shown once again that they can craft great songs, meaningful lyrics, and immersive atmospheres.

Speaking of great lyrics, the album is not a concept album, but contains themes centered on imminent changes in life.  Ray wrote most of the lyrics for the album, and they concern changes that he has chosen for the future.  The title “Theories of Flight”, then, is equal parts anxious and searching, uplifting and hopeful; unlike the straight sorrow of past albums.  One of my favorite things about “Theories of Flight” is the return of the “drone” sound from “Disconnected”.  The new album has many spacey portions that feature a warm drone that feels hopeful and cultivates your spirit.  I love it.  In fact, the whole final track is one instrumental song of warm pulses and waning drones.  So, rather than the grey anxiety of past albums, “Theories of Flight” is all about looking to the skies for your life destination.

Ray sounds awesome.  For a few albums there (including Redemption), I was beginning to worry about him, but his voice seems to have returned in all its glory.  The guy’s a legend.  Speaking of legends, Jim and Frank produce some very memorable guitar work here, including the riffage I desired.  When “From the Rooftops” began, I expected to hear the immediate heaviness that most progressive metal bands so admire, but, instead, the album features subtlety and nuance above immediate head banging.  This surprised me, as some older bands try to make up for lack of composition by just being heavy, but this band is not afraid to weave a beautiful fabric of feelings, and get to the riffs later.

I have to say that Joey on bass and especially Bobby on drums are immensely successful as the rhythm section.  Much of Fates Warning’s atmosphere depends heavily on background grooves as a foundation.  I was seriously impressed with Bobby’s drumming on the last album, but he has really been unleashed this time.  He is literally creating whole melodies with his drumming.  That takes talent that is rather rare.  His beats and fills weave in and around the music, creating whole new portions and layers, rather than just keeping time or blowing off our eardrums with blast beats.  I salute you, Bobby.

So, I really like “Theories of Flight”.  The songs have a proggier feeling than last time, as the structures are especially eschewed.  “From the Rooftops” features this style, but pretty much all of them do, too.  Many of the songs on “Darkness in a Different Light” were rather straightforward.  My favorite tracks, however, are the longer, more atmospheric ones, like “Seven Stars” (killer chorus) and “Like Stars Our Eyes Have Seen” (great guitar licks).  My absolute favorite, and one of my favorite tracks this year, is “The Light and Shade of Things”.  This track really represents the whole album, as it features everything from amazing drumming and guitar work to Ray’s awesome voice to a longer, differentiated song structure that it is wreathed in grey and hope.

“Theories of Flight” might not be the best Fates Warning album yet, but it reminds me of my favorite from them, “Disconnected”.  It is an album that reflects our life journey; the ups and downs, the unknowns and triumphs, the light and the darkness.  Mostly, however, it conveys warm feelings of hope, all while giving us that signature Fates Warning sound in a proggier package.

One response to “Fates Warning – “Theories of Flight””