What an incredible year 2016 has been thus far!  Approaching Airbag’s new album, I never thought I’d be affected by it so much, but their new album “Disconnected” has really found a place in my mind and heart, even in this year so crowded with incredible releases.  Airbag’s new album sounds like their past albums, but it’s also very different.  Their previous album “The Greatest Show on Earth” was great, as well, but there’s just something about “Disconnected” that has taken their sound into new territory for them.

Airbag hails from Norway.  If you haven’t heard Airbag before, it will become readily obvious that their main inspirations are Pink Floyd and Porcupine Tree.  On their previous record “The Greatest Show on Earth”, those influences were quite in my face.  However, the band has developed and progressed since then, taking on what I believe to be their best sound, and best album, yet.  Floyd and Porcupine Tree aren’t nearly as prevalent here, and I can feel some pop and indie tones joining the mix.

The album is a live wire of emotional guitars, deceptively simple rhythms, gorgeous keys, electronic programming that hits just at the right moments, and vocal hooks that will knock you flat.  The band is made up of Asle Tostrup on vocals, Bjørn Riis on guitars (among other things), Jørgen Grüner-Hagen on keys, Anders Hovdan on bass, and Henrik Fossum on drums.  These guys feel more like a unit than ever before, issuing an emotive, thick atmosphere that will penetrate your very soul. 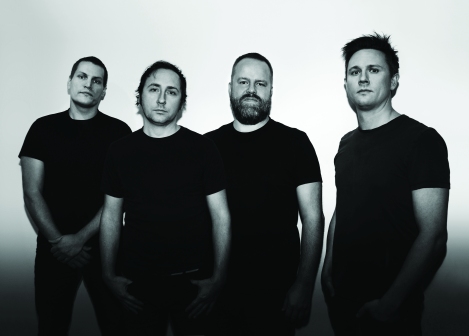 “Disconnected” hums with life with tracks like “Killer”, a longer track full of pop hooks and fluttering electronic vibes combined with the familiar emotion for Floyd.  In fact, the majority of the tracks are close to 10 minutes long, the title track being 13 minutes long.  These longer songs make for climactic structures, sublime tempo and melody changes, and ethereal portions that scratch my itch so well (that sounds a little weird).
“Killer”, for example, builds and builds in a tense environment with a beautifully composed guitar lick from Bjørn until it explodes in anguish and brokenness near the end.

My favorite track is “Broken”, however, followed by the title track.  I have had the chorus and verses of “Broken” ingrained into my mind for weeks now.  It, like many of the tracks, features a slower pace, but the exquisite vocal performance from Asle combines so serenely with the ginormous emotion shown from Bjørn’s guitar solos.  Bjørn released a solo album last year, and he has since become a guitarist that I watch very closely, playing solos and licks that feel inspired, no matter what song or what album.  Add to all this the electronic programming that is classy and not detracting, as well as the sweeping rushes of keys from Jørgen, and you suddenly have a track (and album) that is one of the best this year.

The rest of the album follows suit.  “Slave”, for instance, is purposefully understated in tone, and “Sleepwalker” revels in acoustic beauty.  The title track itself is like completing an emotional arc, and it feels so right as the lyrics portray the crashing and burning of the feelings that have been slowly building in pressure the whole album.  The final track is called “Returned”, and I can’t help but feel similarities with Steven Wilson’s latest “Hand.Cannot.Erase” track called “Happy Returns”, as they evoke some of the same images and feelings.  It’s a refreshing end to a great album.

“Disconnected”, then, is an album with palpable emotions and longing lyrics, weeping over the disconnection in relationships and people.  Its definite pace creates an anchor for your heart as you experience the sweeping feelings and grey darkness of sadness and desire.  I have found myself lost in this album far more than anything else Airbag has crafted thus far, as all the charm and gentle tones have given me something on which to latch.  Make sure you hear this mature and very brilliant album.