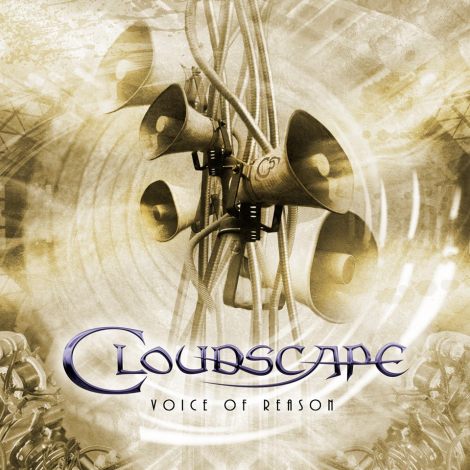 Expectations.  Sometimes they can ruin an album.  I’ve always been aware of Cloudscape, even as far back as 2008, if not earlier.  I am a huge fan of one of their albums, 2008’s “Global Drama”, and I recently finally bought myself a physical copy that I have been relishing.  Naturally, when I saw they released a new album in January called “Voice of Reason”, I had to make sure I heard it.  Looking back, I wish I would have left well enough alone.

Cloudscape is progressive metal leaning towards power metal.  There’s nothing inherently special in their style.  They sound more or less like many other bands in the subgenre, but I’ve always thought they had a little something extra that made them, I don’t know, interesting.  With this latest album, though, I feel like they chucked all that out of the window.

The band is made up of Mike Andersson on lead vocals, Patrik Svärd and Stefan Rosqvist on guitars, Håkan Nyander on bass, and Fredrik Joakimsson on drums.  These guys are all exceptional instrumentalists who play with precision, speed, and unity.  Mike’s voice, perhaps the thing that always has set the band apart in my mind, has a strangely melodic voice that feels like a cross between Dio, Axel Rose, and maybe someone like James Labrie.  It’s hard to describe because it sounds different in different tempos.  He has that caterwaul, but he is also silky smooth other times.

On “Voice of Reason”, much of what I loved is lost.  The band leans away from the varied and even ethnic sounds of their earlier albums (tons of melody and tons of very progressive structures) towards a more power metal and classic heavy metal sound that, while not eliminating the progression, definitely feels dated and rather bland.  The guitars are incredibly heavy on this album, always galloping and always riffing and squealing.  Drums and bass sound great with the drums really standing out in the blast beat arena, at least.  As for vox, Mike chose a shouty vocal approach that leans away from the gravy and towards that annoying side of his voice, sort of like the difference between Russell Allen’s gruff and melodic styles (melodic Russell fan here).  In the end, the focus seems to be on recreating another era’s sound rather than on making great songs.

Perhaps it was the band’s purpose to emulate 80’s metal and even 80’s pop rock at times, but it still doesn’t really sit well with me, as they chose some of the most shallow, most annoying bands to copy from that era.  If you don’t hear Guns ‘n Roses, Van Halen, Motley Crue, Dio (I do love Dio), etc. in this album, then you need your ears checked.  So, while it’s an interesting idea to combine all this with the power/progressive metal sound, it just doesn’t turn out that well, and, besides, it’s all been done dozens of times.

The lack of imagination could be forgivable, though, if the songs were awesome.  They aren’t.  Just like with Circus Maximus, the band seems more focused on style than on substance, and they manage to write songs with little rhythm, few decent vocal lines, and many chaotic sections that just feel bloated by the overbearing production.  Take the title track, for instance.  It’s the “epic”, so to speak, and the first half is a contorted mishmash of random guitar squeals and half-assed  vocals.  It turns interesting towards the end when some space actually enters the mix, but it isn’t totally redeemed.  The same goes for annoying tracks like “Futuristic Psycho” and “All for Metal”.  As you can probably tell, many of the lyrics are also awful.

But there are bright spots.  I enjoy “A New Design”, part of the title track, “Needle in the Eye”, and “In Silence We Scream”, the latter one being probably the best track on the album.  I also enjoy the ear numbing guitars for what they are, as this album is definitely fun to hear in that department.  If that’s all you are after, then you’ll love this album.  In some ways, I do like this album because it’s entertaining and shallow, and sometimes that’s what you need.  But most of the time, I crave something more, which progressive music usually delivers in spades.  With “Voice of Reason”, however, I feel that Cloudscape has exited that arena to play hair metal and spout stupid cliched lyrics.  I’m not a fan, though I don’t doubt many metal fans will love this.